Is Doc Holliday In This Photograph?

Is Doc Holliday in this photo of the Las Vegas Old Town Jail? 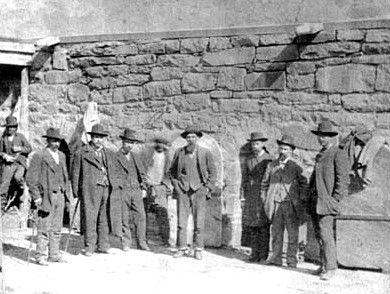 Prisoner J.J. Webb and friends in jail courtyard, March of 1880

That is J.J. Webb in the center, with shackles on, and some believe his good friend John H. Holliday is to his immediate left. He seems a tad short to my eye, but, his suit coat is a dead ringer for the one he wears in his Prescott photo, taken a short time prior. 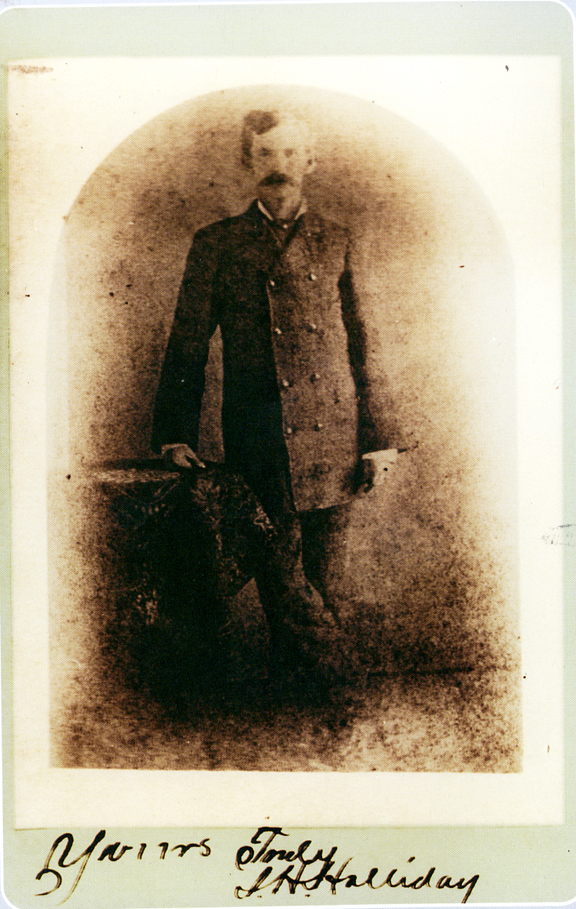 Billy the Kid also spent time in this same jail, when Sheriff-elect Pat Garrett came through on his way to Santa Fe to collect the reward on the Kid. This was in December of 1880. There has been some talk, online, about Bullshit Jack also being in the above photo. As you might recall if you read True West magazine, we published a long lost newspaper clipping, courtesy of James B. Mills, about the Kid and Bullshit Jack being in the Santa Fe Jail together.

Here is our esteemed colleague and Doc Holliday author, Gary Roberts, weighing in on the above Las Vegas Jail photo:

"I do not recall an article mentioning Doc and BS Jack visiting Webb or about the photograph. By any measure, it is an important photo. If this is indeed Doc, it is especially noteworthy.  I don't remember a newspaper reference to the photographer or to a gathering of friends.  On April 4, the GAZETTE reported that Jack Allen and Dave Rudabaugh called at the jail to see Webb. Their visit was a rather pitiful attempt to free Webb.  Once they were inside, they shot the jailor and threw the keys into Webb's cell, "telling him that there were the keys that they must go."  Even the paper was surprised at the inepititude:  "How did they imagine that he should get out and escape on foot without arms?"
"This photo was taken within months after the well-verified Prescott photo of Doc that Craig Fouts acquired from the McKey family in Georgia.  The Prescott photo was made in the late fall of 1879, and this photo was likely made in March 1880.  In the photo with Webb, Doc is wearing a hat, and a topcoat which makes him look a little heavier."
—Gary Roberts
"Doc Holliday is ten feet tall and weighs a ton."
—Tucson Daily Star, June 11, 1882