The Truth About The Cons of Two Guns, Arizona

Back in 2001, when the True West World Headquarters was in a wash behind the Goatsucker Saloon, two guys from northern Arizona showed up at Clantonville (Bob McCubbin's nickname for our offices) in a late model sedan and wanted a meeting with me to talk about their ambitious plans to resurrect an Arizona ghost town they claimed was "ten times wilder than Tombstone." The name of this defunct berg was actually a trading post-tourist trap called Two Guns, east of Flagstaff, Arizona on old Route 66. I was already familiar with it because when I was growing up, we drove by the garrish, roadside pit stop on our annual trips to Iowa but, of course, we had never stopped there.  My dad was loathe to stop anywhere, and he usually gassed up in Flag, so it was pedal to the metal by the time we shot by Two Guns back in the day (1950s-1970s). 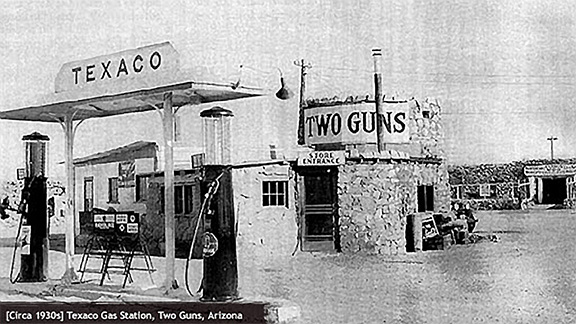 Anyway, here are some of the claims the two gents were hawking.

"With the closest law enforcement being some 100 miles away, Two Guns earned a reputation of being meaner than Tombstone and Dodge City combined. The main street was aptly referred to as Hell Street, and included fourteen saloons, ten gambling houses, four brothels, and two dance halls. When the wild town finally got a peace officer, the first one pinned on a badge at 3:00 p.m. and was laid out for burial at 8:00 p.m. Five more foolish men also tried their hands at marshaling in this God-forsaken town. None of them lasted more than a month in the position before they too were killed. Boot Hill cemetery filled up fast, where at one time 35 graves could be seen with wooden markers and stone covered mounds. All are gone today, but that of Herman Wolf, a trader who passed away in 1899 and the only one to have died peacefully."

One call to Marshall Trimble, the official state historian, got me to the truth. Marshall informed me the originator of these baseless, wild claims was a nefarious BSer named Gladwell Richardson who wrote hundreds of history articles (many for True West!) and he also penned pot boiler, pulp Westerns by the score.

I made a mental note to avoid any history articles penned by Gladwell Richardson (he died in 1980) and thought that was the end of it.

Last week, out of the blue, my friend, the artist, Buckeye Blake sent me a provacative, topless photo of an Apache maiden. When I asked where it came from he replied, by email, that it came from "the photo collection of Gladwell Richardson." Then he sent me this photo of the notorious provocateur himself. 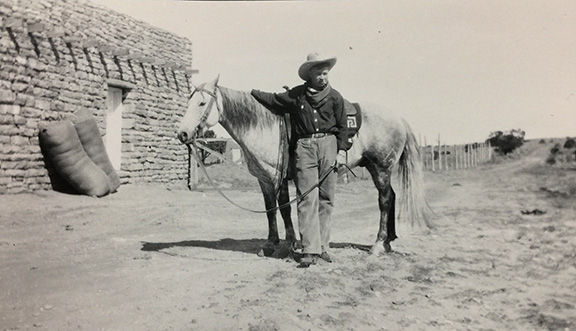 Gladwell Richardson on the Navajo Res

We see two full bags of wool, above, left, that he perhaps used to pull over the eyes of gullible readers, like me, and you.

And here is a sample of some of his book titles: The Trail to Nowhere, Arizona Guns, Cowboy Joe, Rio Guns, Gun Thunder, The Rattlesnake Range, The Boothill Kid, Night Riders, War Horse Range and The River of the Lone Rope.

"We are born knowing the truth. Then we see."

"I lost sight of reality just enough to glimpse the truth."

—Derek DelGaudio, "Amoralman: A True Story and Other Lies"