My grandfather, Bob Guess, had a younger brother who owned a small ranch at Steins Pass, New Mexico. When he passed (1974-ish), I inherited his saddle and it is a point of pride in my studio. 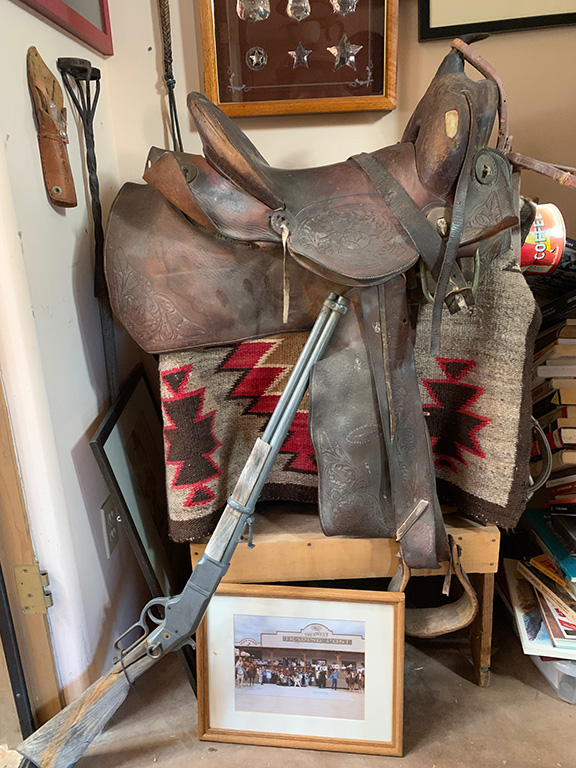 This morning I was working in my studio and I didn't hear Uno rooting around behind me, or licking my leg, or anything. This, of course, is a sure sign he is up to no good, somewhere. So I got up and looked around at his usual lounging—and peeing—spots, but no Uno was to be found. Finally, I looked up the stairs that leads to the Crow's Nest and who did I spy on the top step looking down at me with some amusement? 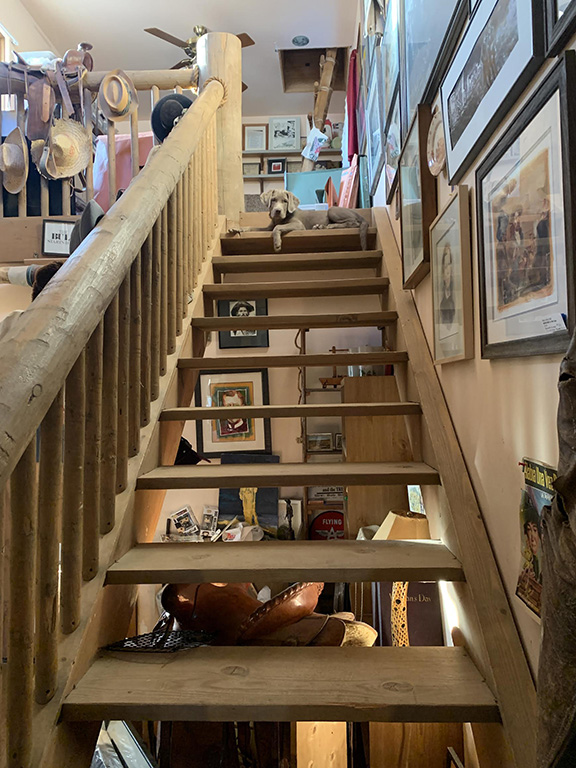 When I posted this on Facebook, a co-conspirator of mine wanted to see more of that saddle peeking through the stairs at the bottom. 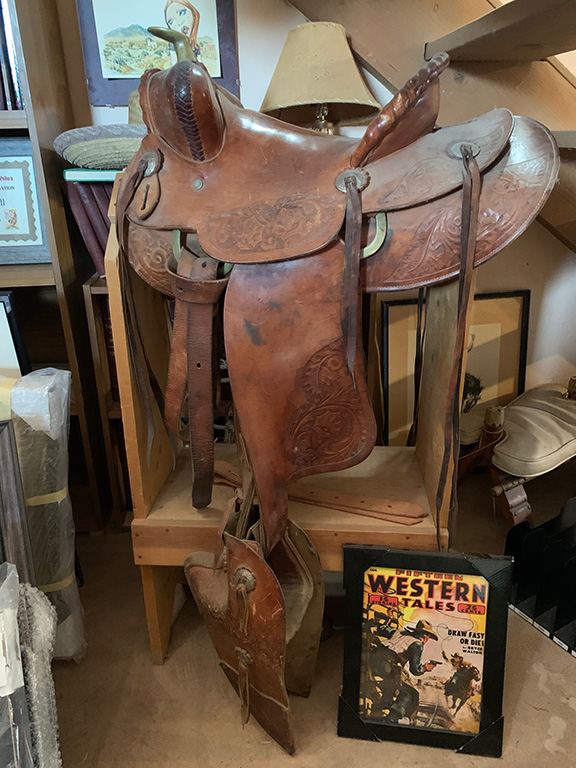 I bought this in the late seventies when I worked in downtown Phoenix at New Times Weekly. There was an old school pawn shop up the street and I saw this on my lunch hour and had to have it. I think I paid $300 for it, which was a lot for a guy making $110 a week, before taxes. This saddle also is a pride of joy in my studio. Of course, I have other saddles hanging about in here as well, but they're not worth taking the time to shoot.

Meanwhile, here are the Mexican shotgun chaps, I bought in Orogrande, New Mexico, on the way to Lincoln in 1991 to shoot reference photos for what became my first BtK book. 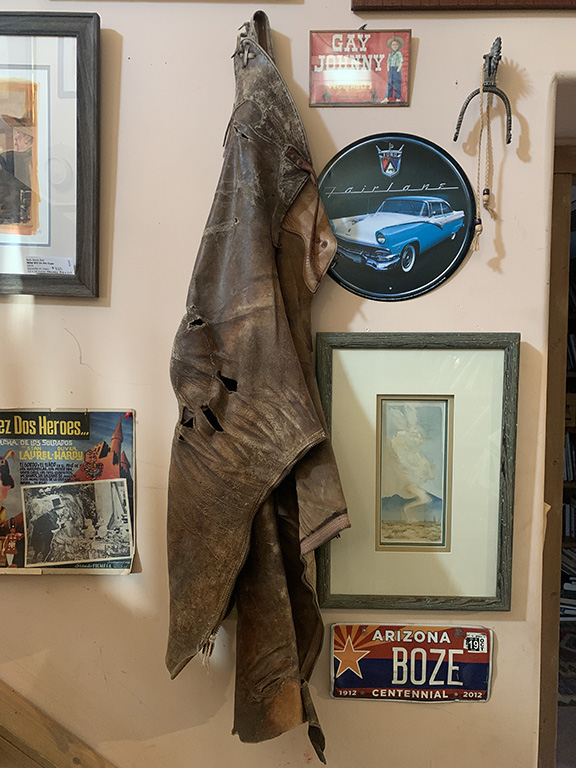 And, here are those Escopetas put to good use: 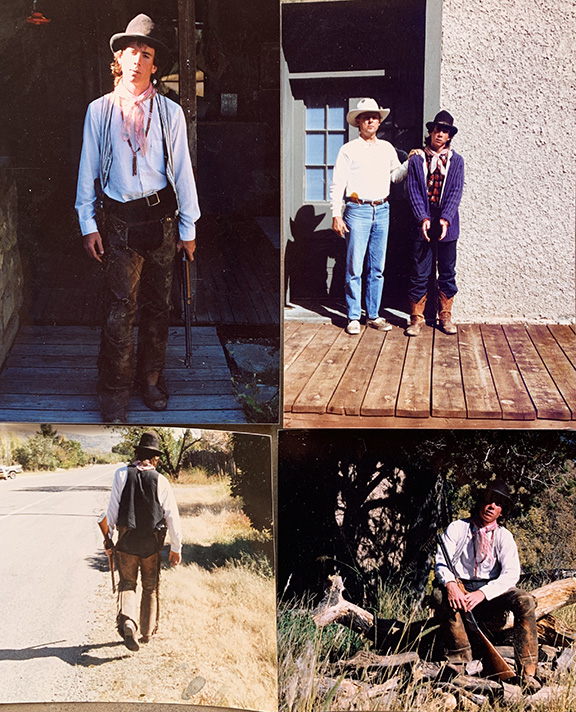 William H. Cox II wearing said same Escopitas
in Lincoln, New Mexico, 1991
In the one scene, above right, sans chaps, I was attempting to get good photo reference for the Kid and Pat Garrett outside the Lincoln County Courthouse after his arrival there on April 21, 1881. I had someone take the photo and stood in for Pat Garrett. Unfortunately I am only six foot tall and I needed someone in the six-four range, so that modeling, height-difference-assignment went to my neighbor, Charlie Hickox (the late, great three-time gold medalist at the 1968 Olympics in Mexico City). 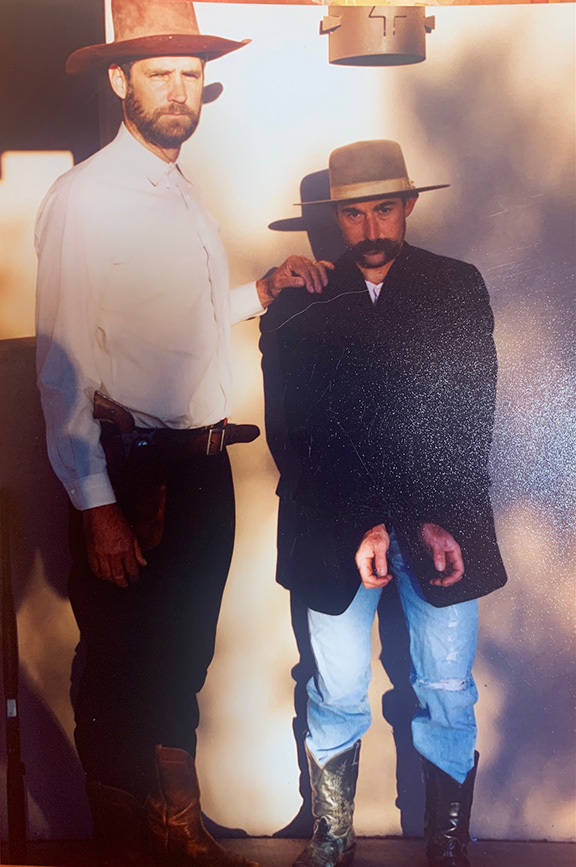 Charlie Hickox and Gary Ciminello
assume the pose
And, so I extrapolated between the two photos and ended up here in the book, BtKIII: 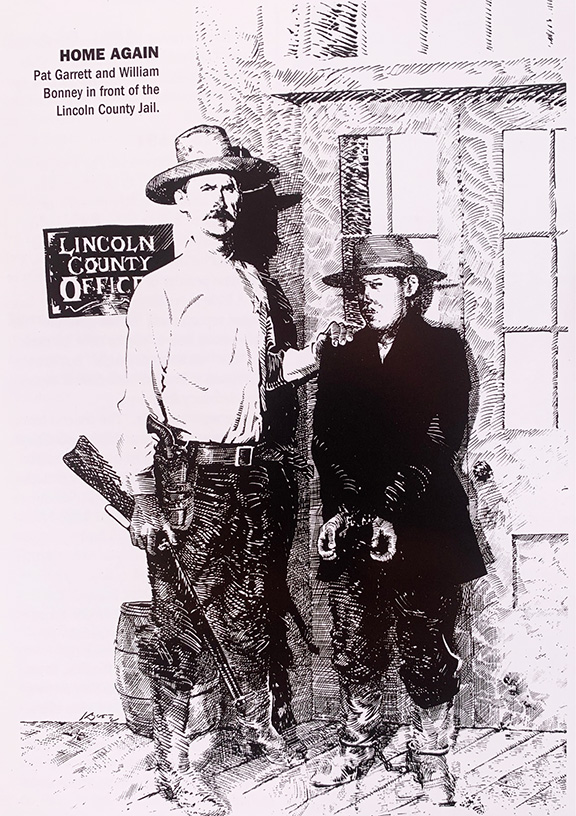 Pat Garrett & The Kid, April 21, 1881
And, as for Billy's outfit (where are those great chaps?!), remember, the Kid and his crew got new suits at the Las Vegas jail from their friend, the mail carrier, Mike Cosgrove, so this is my take on what that suit would look like almost four months later.
Yes, I admit I am a slave to details like this and sometimes I wonder if it adds up to anything. As a New Yorker reviewer for the new book on Graham Greene puts it in her excellent take on the biography, "The Unquiet Englishman," sometimes a collection of facts isn't enough. As Joan Acocella puts it, "we look for the beach, but all we see are the pebbles."
Sigh.
"The truth is not facts lined up."
—Old Vaquero Saying
Gearing Up For Carson at The Stake

And then there are facts being twisted. We are at a curious juncture with the current tearing down—figuratively and literally—of so many historical characters. 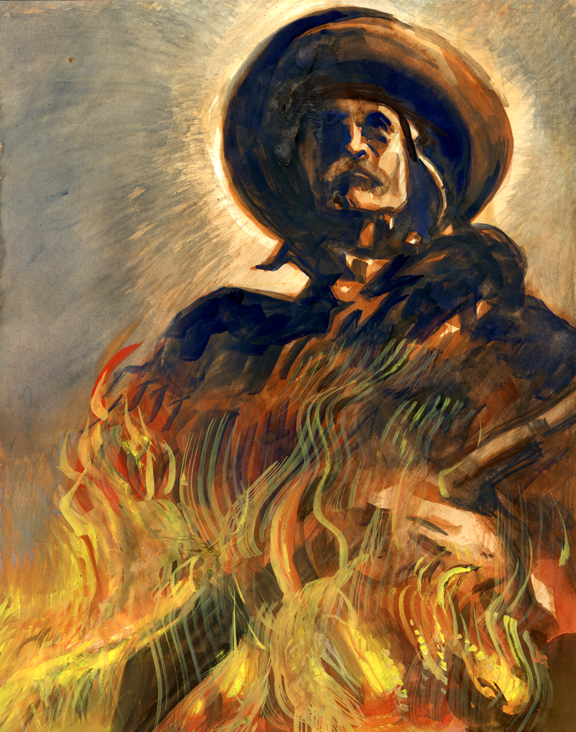 Daily Whip Out: "Kit Carson at The Stake"

A cover idea, perhaps? A Carson statue going up in flames? I've got a few more takes on it, to come.

"It's hard to kiss the lips at night that chew your ass out all day long."