Funny what a hunch can produce.

I didn't see any ads or notices about the event in Tombstone. I just knew I had to be there, in the corral, for the centennial of the Earp-Clanton gunfight on October 26, 1981. So, on a hunch, I simply got in my Ford F-150, dropped my daughter off at grandma's house in Tucson, drove to Tombstone and went straight to the O.K. Corral.      Turns out, I wasn't alone. So many of the people I met that day had a profound influence on my future. To say the event changed my life is almost an understatement. 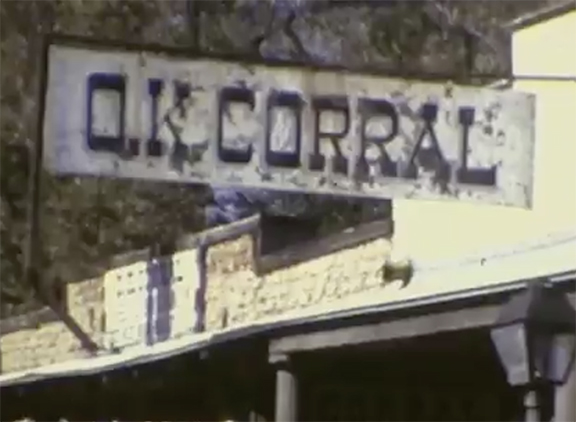 First shot from my 8mm film

Here is just a partial list of the people who had the same hunch as me; Harold Love, Jeff Morey, Richard Ignarski, John Bianchi, Ben Traywick, Bob McCubbin and Phil Spangenberger. Turns out they each had the same love for the same history as I did. 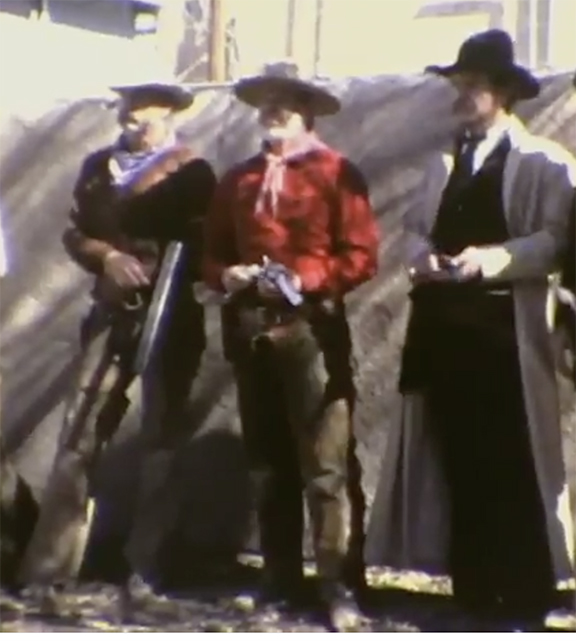 at the O.K. Corral centennial 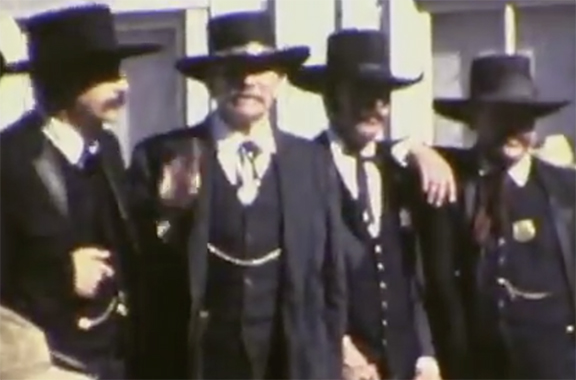 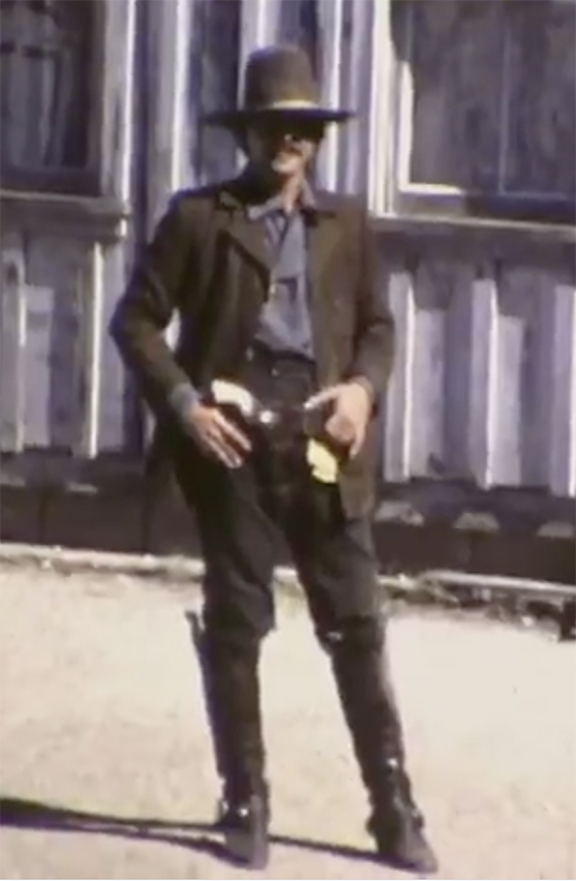 Richard Ignarki in the corral 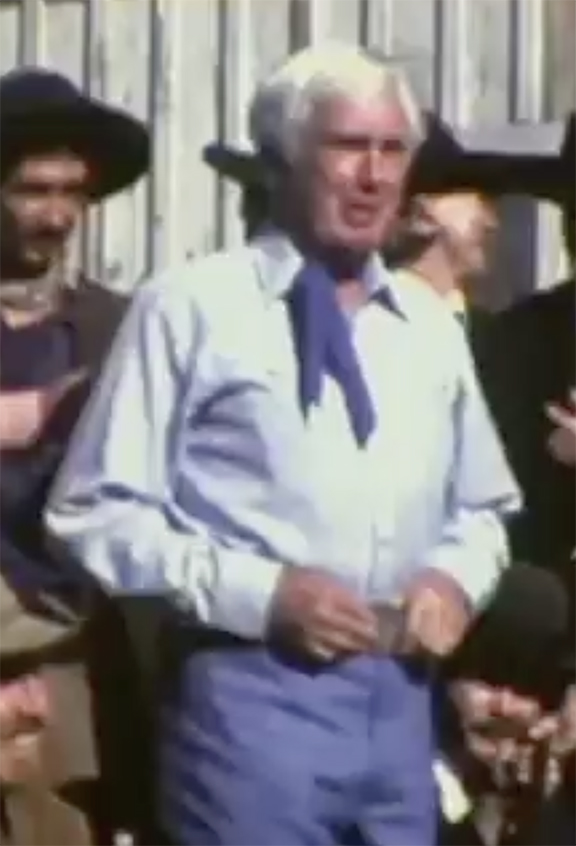 Harold Love, the owner of the O.K. Corral site

Fast forward: in 1999, Bob McCubbin and I made the decision to buy True West magazine over breakfast in the O.K. Cafe (across the street from the O.K. Corral). Richard Ignarski opened the Gunfighter Museum in Tombstone, Jeff Morey helped me reconstruct a step by step analysis of the fight which was showcased in my Doc Holliday book, John Bianchi, the owner of Frontier Gunleather became one of our biggest supporters in the magazine and Phil Spangenberger became our gun editor in 2003. Phil has written almost 200 columns and features for True West, since then. We are proud to name our friend, Phil Spangenberger as the recipient of our True Westerner Award for 2022. Details to follow.

In the nineties, the historians and buffs I met expanded to include even more guys who loved Tombstone as much as me. We would meet almost every year on Allen Street to solve the mysteries of history and visit the outlying sites, like Galeyville, Mescal Springs, Charleston, Drew's Station and Hooker's Ranch.

And, we called ourselves 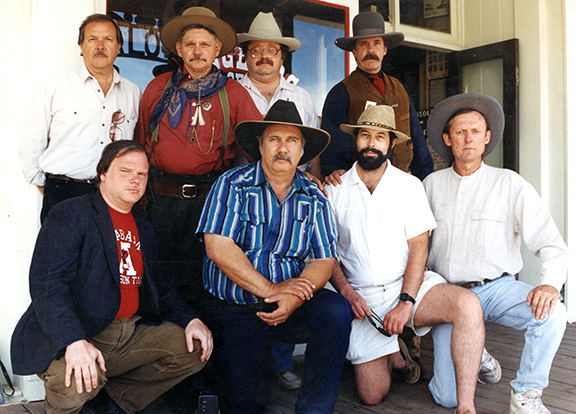 The Backstory: I wanted a photo of the Renegades taken on Allen Street at the exact spot that a few of us almost got into an altercation the night before. When everyone was there I looked around to see who might take the photo and lo and behold, Wyatt Earp (his actual name!) was performing up the street at the Crystal Palace and he just happened to be walking by and I asked him to take the photo. I know, if I saw it in a movie, I wouldn't believe it either.

Phil's Recollection of That Fateful Day

Funny—and bizarre  story: When I arrived in town by myself, I was approached by a fellow who said “Wes Flowers wants to meet you.” I said “That’s fine, I’ll be down by the OK Corral for a couple of days, tell him to come by. “Oh no, the fellow replied, “Wes doesn’t come to you, you must go to him!” I realized that just as in the Old West, my reputation as a “gunslinger” had  preceded me. I thought that was funny, “was I in a scene from a  Western movie, or was this for real?”   At the same time, it was somewhat surreal, like life imitating art.  I said,” I’m sorry, but I’m here to do a job and I won’t be going to see Mr. Flowers.” I found out through Harold Love that Wes Flowers was the local “fast gun,” and he was miffed that he had been left out of the 100th anniversary celebrations. Evidently he wanted to have a mock showdown with me to prove he was the fastest gun. I was there for a specific job and wasn’t going to help him live out his “movie” fantasy, and upset Harold Love’s planned celebrations. When 11  O’clock rolled around and I didn’t show, it was crossed out, and 12  O’clock  put in and so on for the rest of the day—every  hour!  Apparently Flowers’ crowd hung out in the town by the Oriental, and that end of town, while Love’s people stayed at the Crystal Palace and that end, toward the OK Corral, and neither of us crossed some sort of invisible line. Love didn’t want me to engage in any nonsense with Flowers, since he felt that Wes Flowers was just trying to steal away publicity form Harold Love’s celebration, where he had invested lots of money, by bringing me in, and other projects relating to the 100th celebration. I never did meet Wes Flowers…until several years later,  under completely different circumstances, and he was very friendly and never mentioned the OK Corral incident. I’m sure he was embarrassed that his plans flopped. I heard he had passed away several years ago.

"Funny what you can accomplish when you don't care who gets the credit."