A respected historian and wonderful friend passed yesterday. His wife, Melody, informed Paul Andrew Hutton who included us in this special obit, written by the Old Bison himself:

Melody insists that I write my own obituary, which makes sense. By the time you read this, I will have checked out and perhaps had my ashes scattered over the big rock in Logan Canyon, Utah, where Melody and I first connected in 1973. When and how I died will have to be filled in after I die.

Within a fairly narrow context, I think I have lived a pretty successful professional life. Personally, my first marriage went on the rocks in 1977 after twenty years, leaving two sons, Donald Warner and Philip Lee. Don is a lawyer and corporate executive, Phil an astrophysicist. My second marriage, from 1980 to my demise, was highly successful from beginning to end. Melody Webb has been a wonderful wife, a wonderful care-giver to one who lost almost all his hearing, a wonderful friend, and a wonderful professional colleague. (I tell a much more lengthy story of my life in my 2004 publication, Custer and Me: A Historian’s Memoir, University of Oklahoma Press. Also, since 2011 I have had a web site, which may still be active when I die: www.robertutley.net. )

I was born in Arkansas on October 31, 1929, reared in Pennsylvania and Indiana, and obtained my higher education at Purdue (1951) and Indiana (1952) Universities. What launched by career, actually in two worlds, was a fascination with George Armstrong Custer, launched by Errol Flynn in the movie “They Died with Their Boots On.” This at the age of twelve. The Custer addiction, which lasted until my death, led to six summers (1947-52) as a “historical aide” for the National Park Service at Custer Battlefield National Monument. Those were my college years, and they pointed me toward one of the two worlds–a career in the National Park Service.

The other world grew out of my intense desire to write history–about Custer, of course. A self-published brochure at the age of nineteen launched me toward that world. As I begin drafting this obituary, in the middle of 2014, I have published eighteen  books; [at the time of this update, June 2015, the number stands at 21] more will have been added to the list by the time you read this. Although I began with Custer (and in 1988 published a biography of him), I expanded my interests to include a variety of aspects of the history of the American West. At the same time, as one of the organizers of the Western History Association in 1961, I drifted into association with academics. I did not aim my books at the academics but at the general reader, but the academics approved enough to establish my scholarly credibility. A number of my books have won prestigious prizes, and as a sign of academic approval I hold honorary doctoral degrees from Purdue (1972), Indiana (1983), and the University of New Mexico (1976).

In my early years, I cherished an ambition to make a career in the US Army. Narrowly escaping World War II, I hoped for a commission as an ROTC officer after graduating from Purdue University. High blood pressure kept me out of Senior ROTC. With the Korean War in progress, I finished schooling with an exemption from the draft. Then in 1952 I waived the exemption and was drafted. Basic training and Leadership School at Camp Roberts, California, led to assignment to Officers’ Candidate School at Fort Benning, Georgia. Six months of brutal training led to a commission of second lieutenant infantry in May 1954. I was a distinguished graduate, second in my class, and as such eligible for a commission in the Regular Army. By that time, my military ambitions had weakened. I spent three months as a tactical officer at OCS and then manipulated the system, through friends, to get assigned as a historian in the historical section of the Joint Chiefs of Staff in the Pentagon. There I spent four years, the first three in uniform, the last as a civilian. I relate this long story to make two points: the field-grade officers I worked with in the Pentagon taught me what I should have been taught in graduate school and were responsible for the quality of my historical writing; second, that experience imbued me with a life-long interest in the military, especially the army.

After army service, I made my career in the National Park Service. I served as Regional Historian of the Southwest Region in Santa Fe from 1957 to 1964, when I was summoned to Washington to serve as Chief Historian, 1964-80. I played a major role in the development of the National Historic Preservation Act of 1966 and then in its implementation.

I took early retirement at age fifty in 1980 and returned to Santa Fe to marry Melody. While continuing to write books, I followed her career as a house-husband. After nine years in Santa Fe, Melody switched from history to management and became superintendent of the Lyndon B. Johnson National Historical Park in the Texas hill country. In 1992, she was chosen as assistant superintendent of Grand Teton National Park, Wyoming.  Those years were very enjoyable for me, although they stressed Melody. In 1996 she too took early retirement at age fifty, and we moved back to the Texas Hill Country, settling in Georgetown, 30 miles north of Austin.

From 1977 until 1997, I served on the board of directors of Eastern National Park and Monument Association, twice as chairman. Melody had accompanied me to all the meetings, so knew all about this nonprofit association that supported the national parks, so she was logical chair of the board and served until 2006.

In 2007 Melody and I decided in explore the possibility of moving to a retirement community–a continuum care facility that would support us for life. I insisted that it be in the Phoenix area because that was where all her family lived. We chose what is now (October 2016) called Ví at Grayhawk. We have now lived here since 2009 and have never regretted the choice. We loved our big house in Georgetown, but it had to be cared for, and Melody found no compatible outlet for her need for social interaction. The scene in the exact opposite here.

As of this update (October 2016), I have published my 22nd book, comparing Billy the Kid and Ned Kelly, with Yale University Press. Before that UNM Press published my edited and annotated excerpts from the journals of a frontier army surgeon. I am now working on a book for the University of Oklahoma Press on Civil War generals who went west after the war. For my publications, in April 2015 I was inducted into the Western Writers of America Hall of Fame.

I turned 87 in October 2015, still handicapped by severe hearing loss and severe lack of balance. But not so handicapped that I can’t enjoy Regent cruises. We have taken five since 2011.

In this January 2022 update, I insert the results of a four-day visit to the hospital. It appears that my mortality is definite but we don’t know when. Melody and I agree two to three years. The explanation involves confusing terminology, so I simply insert what Melody wrote Paul Hutton:

Four days ago I took Bob to the hospital with shortness of breath. Since the hospital is overflowing with Covid, it was not an easy decision. I’m glad that I did because it was not simply shortness of breath. While he has had an echo-cardiogram every year for years, nothing serious had been found. This time the technician took special care to get just the right picture. It showed that the right side of his heart has stretched to the right. He has heart failure in the right side of the heart only. Apparently, in 2017 when he was diagnosed with a pulmonary embolism, it caused a serious and quite rare fatal disease that has taken nearly four years to fully materialize. The simple name is Pulmonary Hypertension. The longer name is Chronic Thromboembolic Pulmonary Hypertension (CTEPH). A clearly written description of the disease is https://foundation.chestnet.org/lung-health-a-z/chronic-thromboembolic-pulmonary-hypertension-cteph/

Bob died on June 7, 2022, in Scottsdale, Arizona, following complications from a simple surgery. 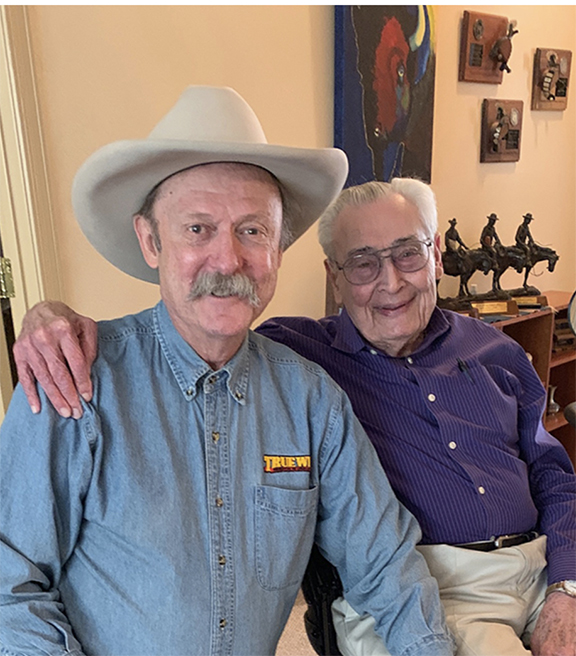 I had the honor and privilege of interviewing the Robert M. Utley, above, about his interview with the 97-year-old Charlie Windolph, who, in 1947, was the last survivor of the troopers who fought at the Battle of The Little Bighorn in 1876. That is one long stretch between Bob Utley talking to Mr. Windolph and me talking to Bob. Amazing!

And, here is that interview:

"It is so typical of Bob that he would have written this in preparaton for yesterday."