When Sharlot Hall Pulled A Gun On Grover Cleveland

Here is a little known story that needs to be illustrated for our Real Women of The Wild West book.

"While Sharlot [Hall] was still in the Marsh Pass area an Indian runner came with a telegram from the Tuba [City] agency for her.  Her beloved mother had been brought, critically ill, from Orchard Ranch to the Mercy Hospital on August 14.  Wasting not a moment, Sharlot made preparations to intercept the train at the nearest station, Winslow.  Commandeering the buckboard and their Navajo guide, Grover Cleveland, she started out late that afternoon to make an all-night dash over the all but invisible wagon track between Marsh Pass and Winslow.  A violent storm broke during the night, turning the normally dry washes which they must ford into raging torrents of muddy water.  Terrified, the Indian driver refused to go on.  Sharlot pulled a gun on him, forcing him to take the buckboard through the swirling waters and on down the nearly obliterated trail until he reached Winslow and the railroad station.  As Sharlot told the story later to her good friend, Alice Hewins of Phoenix, 'she did not know which he was most afraid of, the road or Sharlot.' " 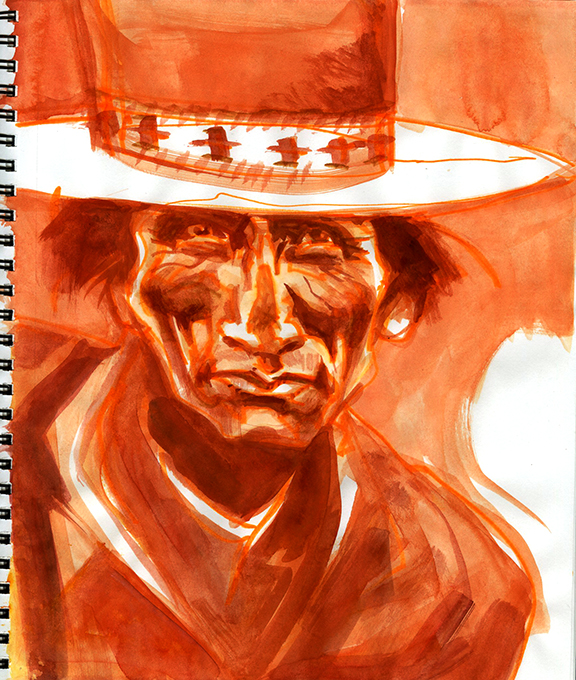 Daily Whip Out: "Grover Cleveland"
Here's What Google Gave Me
Marsh Pass, also known as La Puerta Limita, "The Border Gate", is a gap in Navajo County, Arizona. It lies at an elevation of 6,102 feet / 1860 meters along Laguña Creek. The name of Marsh Pass is thought to come from its location along a chain of swamps and lakes in the pass, that have since been drained by a deep arroyo. The original Spanish name of the pass, La Puerta Limita, indicated the border between the Mexican provinces of Santa Fe de Nuevo México and Alta California to the west. Marsh Pass was a location along the Armijo Route of the Old Spanish Trail between present day Kayenta and the Crossing of the Fathers on the Colorado River. There the route turned northwest toward the crossing on the Colorado River.[3]
In order to illustrate this accurately, I need images of the rough passageways from Marsh Pass down to Winslow. On modern maps, the probable route appears to be Highway 4 down to Second Mesa and then Highway 87 down to Winslow where Sharlot said she caught the Santa Fe (going west to Ashfork and then the spur line down to Prescott).
If I had to guess, Black Mesa traverses the highway from Tuba City to Keyenta, and it appears to have some rough canyons to the south of Marsh Pass and it was probably in that area that the swollen wash and the pistol pulling took place. Here's a modern map of the area. We're looking at northeast Arizona on the Navajo Res. That's Flagstaff, the big yellow mess at bottom left, and that's I-40 along the bottom. 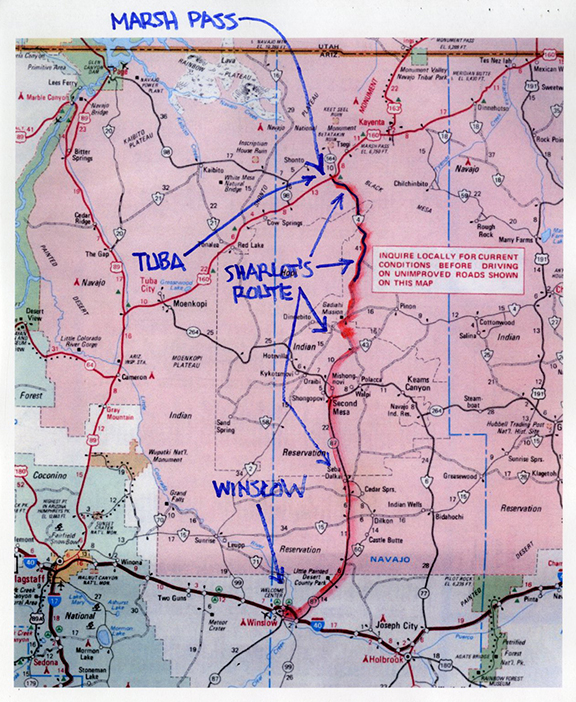 It's a long ride, that's for sure.
Or, maybe the scene is so dark, it won't really matter? 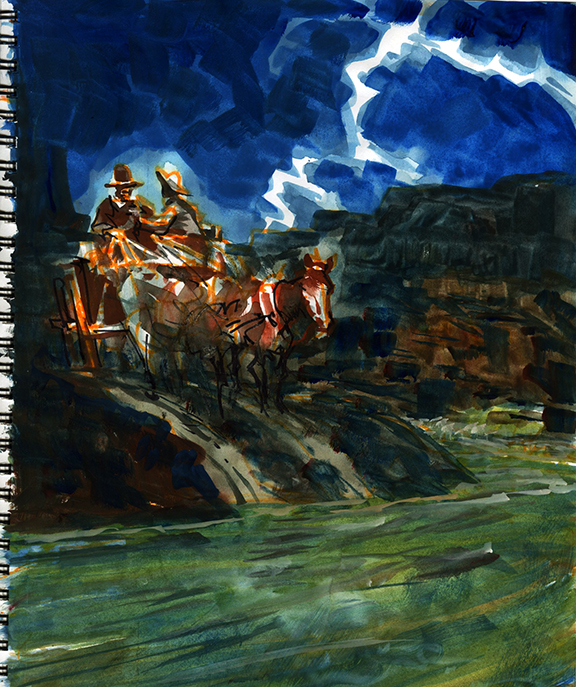 Daily Whip Out Study:
"Sharlot Pulls A Gun On Grover Cleveland"
Special thanks to the Reference Desk Coordinator Tom Schmidt at Sharlot Hall Museum who found the above adventure for me.
"Writing is a form of therapy; sometimes I wonder how all those who do not write, compose or paint can manage to escape the madness, the melancholia, the panic fear which is inherent in the human condition."
—Graham Greene
Posted by Bob Boze Bell at 2:30 PM