For tonight's YouTube video I wanted to talk about the recent discovery of the actual site of the Earp-Brocius Embroglio. What I normally do is write out the entire script here for my blog and then read it several times outloud and try and memorize it as well as I can. Here for your inside viewing pleasure is the narration I wrote for tonight's show.

There is one particular mystery in the Wyatt Earp story that has always bugged me and I can finally say, with some satisfaction, that to my way of thinking it has been solved.

In March of 1882 Wyatt Earp was in a bad way. Not only had all of his dreams of a solid financial stake in the new boom town of Tombstone fallen through, but his favorite brother, Morgan, had just been murdered and his older brother Virgil was maimed in a horrific ambush the previous December. Now, outside the law himself and being hunted by, not one, but two posses full of his enemies, Wyatt Earp and a few close friends, including Doc Holliday were on the Charleston Road angling towards the Whetstone Mountains and a spring he wanted to inspect and possible camp for the night.

I think it's safe to say Wyatt Earp's emotional state was somewhere between massive grief and a slow, boiling rage. 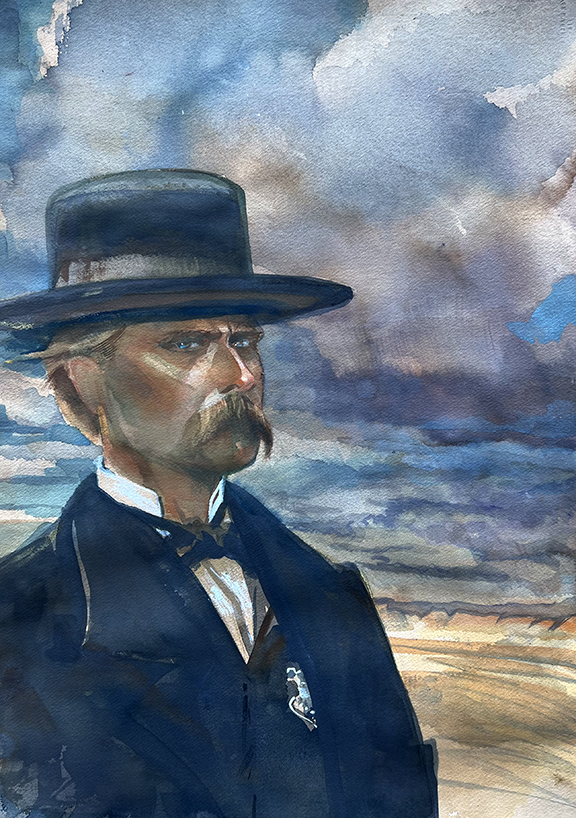 When Wyatt Earp and his posse reached a fork in the trail about five miles from Iron Springs on Thursday afternoon, March 24th, Wyatt ordered his younger brother Warren to wait at the fork for a courier, Charlie Smith, while Wyatt and the rest of his posse, which included Doc, Sherm McMasters, Turkey Creek Johnson and Texas Jack Vermillion would ride on and investigate the area and make camp at the springs.

The events that happened next are controversial, but here is Wyatt's version which he gave to Stuart Lake, just prior to Earp's passing in 1929: "About a hundred yards from the waterhole, the trail rounded a rocky shoulder and cut across a flat shelf of deep sand. Ahead, Iron Springs was hidden by an eroded bank possibly fifteen feet high. Beyond the hollow, where the mountain slope resumed, was a grove of cottonwoods. Between this grove and the waterhole was an abandoned shack, hidden from view by the bluff."

Because of the heat and the climb up the draw, Wyatt had unbottoned his coat and loosened his gunbelts about his waist. The men were weary and hot. Fifty feet from the springs, Wyatt claimed he had a premonition and stopped short, swung out of the saddle, looped his reins in his left hand, and with his shotgun in his right hand, he walked forward on high alert. The rest of his posse lagged behind. Another step gave Wyatt full view of the hollow. As he took it in, two men jumped to their feet, a mere ten yards away. One of them yanked a sawed-off shotgun which he raised to his shoulder, while the other man broke for the cottonwoods. According to Wyatt, the shotgun wielder at the springs was none other than Curly Bill Brocius, the leader of the Cowboys and he fired both barrels, the pellets of which tore through the skirt of Wyatt's coat. Wyatt fired his own shotgun, giving the outlaw leader both barrels, striking Curly Bill "squarely in the abdomen, just beneath the chest wall, well-nigh cutting his body in two." End of quote.

Seven other outlaws burst out of the line shack, with Earp claiming, "I recognized Pony Deal, and, as seven other broke for the cottonwoods, I named each one as he ran saying to myself, 'I've got a warrant for him.'"

Wyatt exchanged shots with the Cowboys claiming he got two more all the while taking fire with the pommel of his saddle being hit. As he finally mounted and rode for safety he felt his left leg go numb. As Wyatt rejoined his compadres he inspected the damage. His saddle-horn was splintered, his coat hung in shreds and there were three holes through the legs of his trousers and five holes through the crown of his hat, and three through the brim. Despite his leg numbness he discovered a bullet had lodged in the heel of his boot. His horse had been nicked in three spots by slugs which had gouged out the hair.

I know what you're thinking: that is some serious BS. Yes, it's unclear just how much of this is Stuart Lake enhancing the near miss fusilade to make Wyatt a bigger hero, or Wyatt himself laying it on thicker than molasses on a cow chip.

After the fight, the Earp posse limped north to Hooker's ranch where they procurred another horse for Texas Jack, days later they made their way to Silver City, New Mexico, sold their horses, took the stage to Deming, then the train north to Albuquerque and on up into Colorado.

Back in Tombstone the fight was first covered in The pro-Earp newspaper The Tombstone Epitaph but the site of the fight was changed to Burleigh Springs, south of Tombstone to perhaps confuse Behan and his posse. Meanwhile, the pro-cowboy newspaper, The Tombstone Nugget flatly stated that Curly Bill hadn't been killed by anyone and offered a $1,000 reward to anyone who  could produce Curly Bill's body. The Eptiaph countered with an offer of $2,000 to anyone who could produce the outlaw leader alive. In today's money that's $28,000 for the Nugget offer and $56,000 for the Epitaph reward! No one ever claimed either reward, leaving the verdict in question to this day. The cowboy version is there was a fight, that Earp stood and fired once while his companions ran away and nobody was hit in the exchange.

Now we get to the mystery of the fight. In March of 1980, armed with a topography map I bought from Wide World of Maps in West Phoenix, I drove to Cochise County in a borrowed truck with my wife Kathy who was eight-and-one-half-months pregnant with our first child. There is something very exciting to me, as a history buff to stand where they stood and this is true whether I am at Iron Springs, Little Round Top or Stinking Springs, New Mexico, or Little Bighorn, Montana. It is always electric and always illuminating. Not true at Iron Springs though. For one thing, it doesn't match Wyatt's description in any way. First of all, you can see all the way across the San Pedro Valley to Tombstone, so anyone riding up to Iron, or Mescal Springs could be seen from a long ways away. Plus, there are no cottonwood trees and it just doesn't fit, at all.

In 1993 I returned with a gaggle of Earp experts including John Boessenecker, Allen Barra, Jeff Morey, Casey Tefertiller, Bob McCubbin, Bob Palmquest, and others, and they all agreed with me. "What the hell is going on here? The fight didn't happen here!"

Fast forward to the summer of 2002 when a helicopter pilot named Bill Evans, who along with his 15-year-old son David, spent most of the 2002 summer riding their dirt bikes all around Rain Valley, a few miles east of Soniota Az, in search of any location that looked even remotely like Wyatt's description of the so-called Iron Springs Fight. I interviewed Bill recently and here is his first person account of what happened.

"Honestly, I wasn't looking for a 'spring' but rather an area which resembled Wyatt's description.  We rode all thru the French Joe Canyon vicinity of Hwy 90 north, (northeast of Mescal Springs),  up onto US Forest Service land just east of Mescal Springs, all around Granite Peak Road and farther north past Empire Ranch, onto Empire Ranch road, both sides of Highway 82 in the Rain Valley vicinity, and around the Mustang Mountains to the South, and to the East, heading down near the Babocomari River.  We hiked into areas with no rideable roads.

"After two months of riding every weekend, I had just about given up, and decided that it really was Mescal Springs; that Wyatt somehow conflated the site and event with another location. On what was the final ride in or around the Rain Valley area, we were headed East through a narrow pass between the  Whetstone and Mustang Mountains. In the lead, I came to a narrow ravine, rode down the west side of it and then up onto the east side, and stopped waiting for my son to catch up. Sitting up on the rim of that ravine, I turned around and saw my son following my path and it suddenly occurred to me I was sitting at the edge of a 15 foot embankment looking down into an old riverbed with mature trees and room for a sizeable encampment. Turning back to the east, and spread out in front of me was a wide plateau 200-300 yards long covered with thick gramma grass. In the distance about a mile further east was Lone Mountain. And to my right at the end of the grassy plateau was a distinctive rocky outcropping on the hillside unlike any of the surrounding geography. My son came up alongside, stopped, and could see the look on my face. Having ridden together all summer looking for Iron Springs he knew the details of Wyatt's description.

"And after discussing each of those significant details we both turned around looking back into the draw and realized that we were standing on the very spot Wyatt had, next to his horse, shotgun in hand, looking down at Curly Bill Brocious. We stood there for several minutes visually taking in all the surrounding area While doing that I recall  thinking to myself, "Isn't that always the way. Just about the time you quit looking for something is when you find it."
—William Evans

And, so, the mystery of exactly where Wyatt Earp's fight with Curly Bill has been solved. It actually happened at Cottonwood Springs and it matches Wyatt Earp's narration to the letter. Well, maybe not the multiple holes in his pants, but the geography matches and I'll take it!

And here's the link to see the show:

Where Did Wyatt Earp Shoot It Out With Curly Bill?

"Hope springs eternal. And, history is a cruel trick played on the dead by the living."