August 26, 2015
Long one down in the Beast, today. Worked on a gaggle of studies this morning, an extenion of the work I did last night. Got into the office at nine, worked on a couple hangouts (Marsh had an answer in ATM that stated Bob Dylan got the gig on "Pat Garrett & Billy the Kid" because Sam Peckinpah dug his music and I knew that was suspect because in Paul Seydor's new book on Sam Peckinpah and Billy the Kid, he says Sam told Bobby Zimmerman he, Peckinpah, was a Roger Miller fan!). Emailed Paul S. to confirm this, left at 10:15 to motor down into the Beast. Stopped at Arizona Art Supply for, believe it or not, art supplies ($95 biz account), then motored on down to Cattletrack Art Compound for a meeting with Brent Bond and Mark McDowell. I'm a big fan of Mark's artwork and all the things they do at the Cattletrack fortress 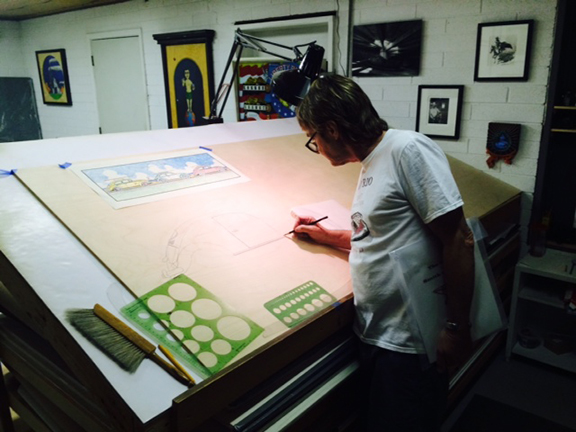 Mark McDowell working on one of his big projects.

Got back in the office at two and worked until five on various projects of my own. Have big plans for a couple of them, but you know what ol' Lokos says:

"Your actions are your only true belongings.
—Allan Lokos