The Nude Duel That Will Not Die

August 2, 2015
Found two unfinished boards on Saturday and worked on them yesterday and today. This is from a Classic Gunfight we did several years back on a legendary pistol duel.

Daily Whip Out: "The Nude Duel That Will Not Die." 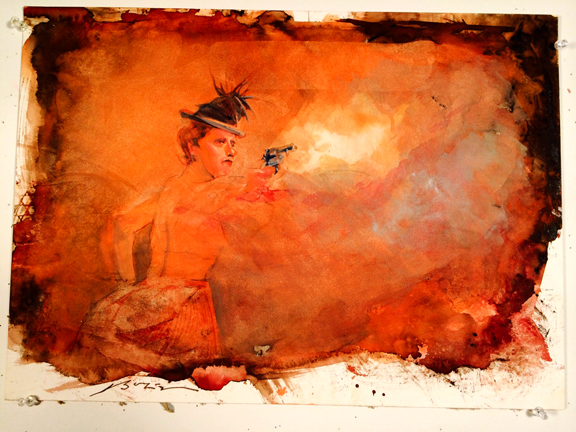 Daily Whip Out: "Well, Is She Naked From The Waist Up, Or Not?"

Immature boys want to know. Of course there was actually a fight in a Denver park between whores and a drive-by shooting (the first in Denver's long history) but the whole naked thing is a myth, but then, you knew that already.

Working on a whole bunch of boards, 21 in all. It sounds manic (and probably is) but I enjoy laying down a wash, putting it aside to dry and grabbing another board and finishing out the brush full of paint. Here's the weekend progress, so far: 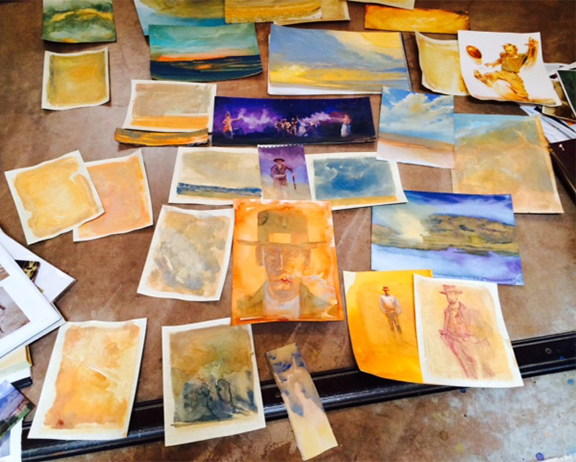 Up there towards the top is the reworking of "The Nude Duel That Will Not Die." I  found it in my Classic Gunfights folder on Friday and thought it needed another night time wash to give it a murkier nocturnal patina. Speaking of patina I dig the old photographic noise in old images, so much so, I attempt to simulate these on a variety of boards and paper.

"In quickness is truth. The faster you blurt, the more swiftly you write, the more honest you are."
—Ray Bradbury