Truthteller at The O.K. Corral

August 3, 2015
The older I get the more I write in my sleep. By that I mean, I dream of words and sentence structure problems and sometimes I wake up with a lead: "Four outlaws got off the train." This is the opening sentence of the section on Hollywood as the Last Outlaw Town in the Wyatt Earp opus we are finishing even as you read this. The scene emulates, or parodies—depending on your point of view—the outlaws at the train station in Serge Leon's Spaghetti Western "Once Upon A Time In The West," with the squeaky windmill and the other High Noon knockoffs (I even knock off the knock offs).

Another byproduct of these nocturnal essay emissions, is I sometimes wake up in the middle of the night, grab my sketchbook and pour out an idea without stopping, then fall back to sleep. These mind dumps can be edifying and sometimes embarrassing. Often, both. Here is an example that happened last night.

Truthteller at The O.K. Corral
Monet knew nothing, that French Bastard. 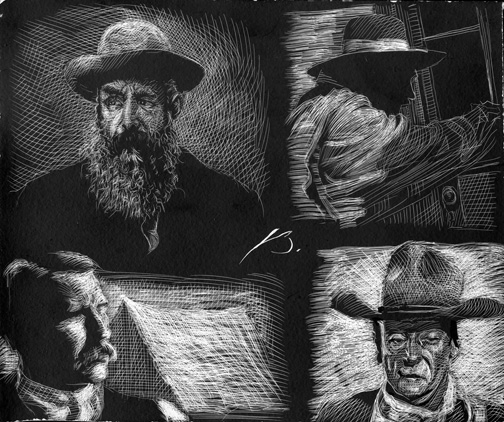 Some claim I have a natural preference in the outcome of the fight because my grandparents lived for a time near Rodeo, New Mexico, but I take no pride in their ignorance.

A sodden miner spread the word.

Led Zeppelin came close, mashing those liner notes. Boyer, that gay blade, found me out, and his attack dog and bail bondsman, pulled my penis from here to Don Dedera's doorstep. Who cares? Apparently, I do.

Frantic nights and Boyer's maidenhead at my back door. Pushing, always pushing. Who knew the truth? Not the ones who claimed it so loudly.

Always with the sex. What does that have to do with gunfire? Everything, apparently.

Buchanen led off his failed campaign there, trumping Trump, triumphing over no one. Behan felt his pain.

Who cares who fired first? Apparently, everyone. Lead answers questions no one wants to ask. Led Zep came close with the spring cleaning deal.

Doc dealt it straight from a borrowed gun, coughing up his entrails ever more. Even he has no shame when it comes to s'mores.

Death dog rat heads lumbering in a row—who cares who told it best? Apparently, I do.

And, who can we turn to when the truth wanders by? Not that French Bastard Monet. All he knows is everything I apparently want to know.
Posted by Bob Boze Bell at 9:38 AM