Marty Robbins On The Cover?

December 9, 2016
As you know we are always looking around for good history and sometimes we find it right in our own back yard. 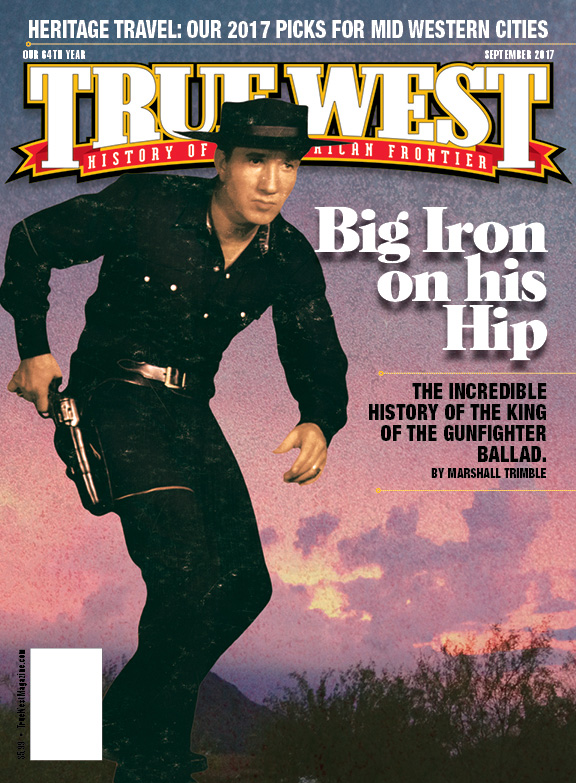 
Our good friend Marshall Trimble has written a feature for us on the true life of The King of The Gunfighter ballad. Here's just a small taste of the wonderful piece:

Big Iron On His Hip
By Marshall Trimble

regular at Vern and Don’s, a local bar on east Van Buren Street in

Phoenix where he made the acquaintance of Frankie Starr, the

featured artist in the band. One evening Frankie came over and said

their guitar player was missing and could he fill in. He later recalled, “I

couldn’t play very well but I could play better than Frankie.”

The gig lasted three hours and afterwards Frankie handed him a

ten-dollar bill. For a guy making a dollar an hour hauling brick Martin

thought he’d been overpaid but Frankie told him that was union scale.

lead guitar player in the band. At last he was making money for doing

Martin to fill in. He later recalled that he was so shy and self-

conscience he couldn’t even look at the audience. He got behind the

microphone, stared at the floor and performed his first song on stage,

Eddy Arnold’s, Many Tears Ago.


The audience liked him but Martin would later say modestly, “I

think they just felt sorry for me.”

Working with Frankie Starr, Martin learned a lot about interacting

and engaging with his audience. It would take a while but engaging

his audience was something that would make him one of country

Frankie Starr was also responsible for Martin landing his first

gig on the radio. Calling themselves the K Bar Boys, they began

singing on KTYL Radio in Mesa. The station had a large window in

front and folks would pull up outside the studio and watch the show.

worker brothers about making a living playing music, advising him to

get a “real job.” One day a friend, Harry Talmachoff, suggested he

shorten his name to Marty Robbins.

He agreed, besides he thought, “Marty Robbins” would look

much better on a record label. Although he never changed his name

legally he would be forever known as Marty Robbins.

That's the history of how he got his stage name. You'll get the rest of the story in an upcoming issue of True West magazine.

—Marty Robbins, "Big Iron On His Hip" from the classic album "Gunfighter Ballads,"
Posted by Bob Boze Bell at 2:56 PM