Walk With A Ridge It Is

December 18, 2016
Tomorrow I hit a milestone, a date I have sometimes thought I would never live to see.

Saw "La La Land" yesterday and it was wonderful (although Kathy didn't really care for it). Written by a 31-year-old kid! I took the theme to be, What is the price for "making it"? This hit me right where I live.

My grandson Weston likes to visit "Cactusland," where Grandpa Ha ha lives. The last time he was here, he and I walked over to Ratcliff Ridge and he marveled at all the big cactus and grandpa taught him how to pee on one. Yesterday, I sent a photo of Ratcliff Ridge to him and asked him what the name of the ridge was. 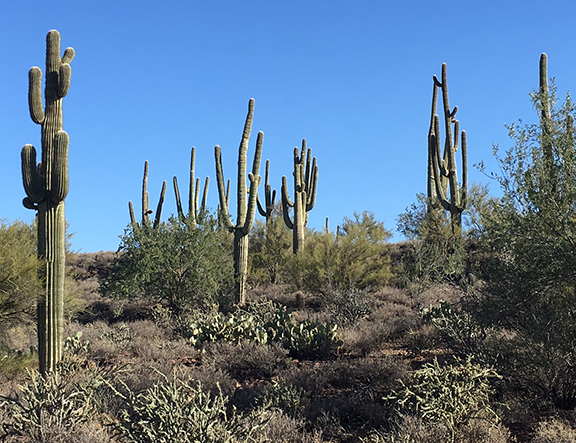 No, Grandpa, it's not Ratcliff Ridge, it's "Walk With A Ridge."


Had a disturbing dream the other night. I was on a bicycle and I decided to ride through a pretty neighborhood in Silver Lake, where my daughter lived for a time before moving to Pasadena and then Seattle. I was pedaling along admiring the old houses when a gang banger on a bike came out of nowhere and grabbed my shirt and tried to pull me off my bike. I managed to stay on the bike and tried to get away,  peddling as hard as I could with him jerking on my shirt and trying to bring me down. Up ahead, another gang banger, on foot, stepped into the roadway and I tried to steer around him, but I couldn't get clear and he grabbed my handlebars, and stopped me, dead in my tracks.

We live in a predatory world, where the strong prey on the weak—and the naive. I was in the wrong neighborhood at the wrong time. Those brutes—whether it be the mongrels, or the Mongrels—have always been here, and always will be.

I've been on this planet for 69 years and 364 days. I know some things, both about the world and myself. Of course, what I know you could fit in a thimble and I often beat myself up for being so damn dumb and naive. In many ways, I can't believe I made it this far. There are forces out there that could crush me like a bug.

One thing is clear: I need a faster bike.

"Creative work is not a selfish act or a bid for attention on the part of the actor. It's a gift to the world and every being in it. Don't cheat us of your contribution. Give us what you've got."
—Steven Pressfield, "The War of Art"
Posted by Bob Boze Bell at 9:02 AM