The Most Famous Western Woman You've Never Heard of

December 22, 2016
Got up today and worked on the most famous Western woman you've never heard of. 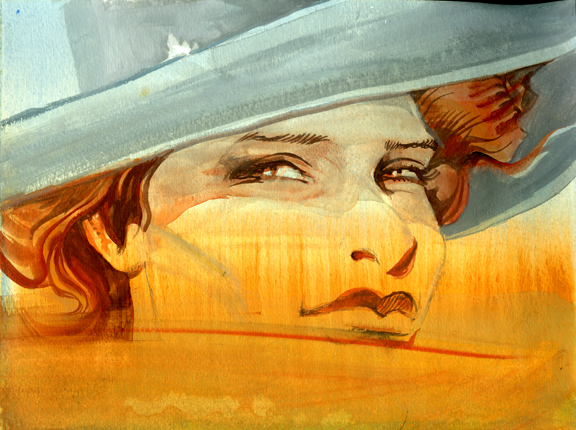 Daily Whip Out: "The Great Western No. 8"

I wanted to capture the snap in her eyes, but this one is perhaps too Bob Peak-ish, or Gibson-ish. Bob Peak was a top illustrator back in the sixties and seventies when I was just coming up, and, of course, The Gibson Girl was a famous type of beauty at the turn of the Twentieth Century. And, if anything, perhaps she's too pretty, and not tough enough. 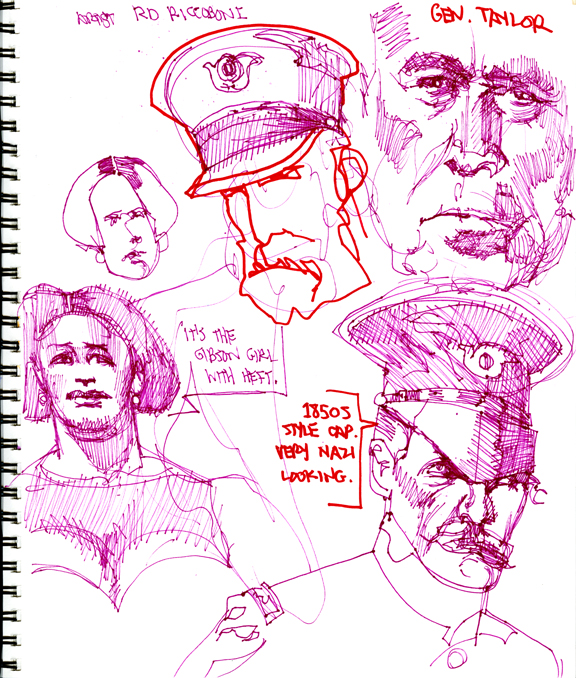 As you shall see, below, Sarah Bowman was a big ol' redhead and I want to hint at her probable freckles, so I also did this sketch this morning before coming into work: 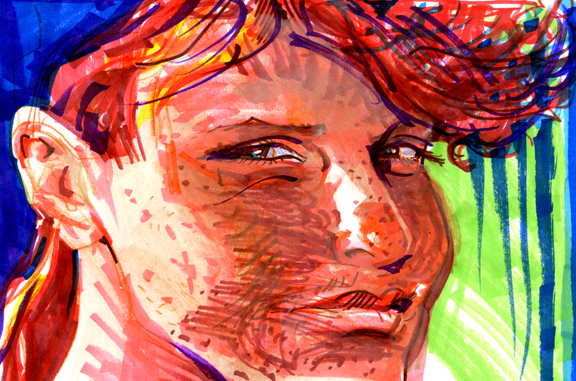 Just a hint of a smile, narrowed-wary eyes, a rougher looking gal, for sure, with a tossled, lioness mane. Closer.
Here, for your entertainment and to make your own comparisons is The Top Secret Writer's eloquent treatment of our gal:

THE GREAT WESTERN
She was the most famous woman on the American frontier – Sarah Bowman, truly larger than life in every way and known to all as the “Great Western.”  Jeff Ake, who met her at Paddy Graydon’s Sonoita saloon in 1856, was awestruck: “They called her old Great Western.  She packed two six-shooters, and they all said she shore could use ‘em, that she had killed a couple of men in her time.  She was a hell of a good woman.”  Ake’s father, Grundy, spoke of Sarah reverently as simply, “the greatest whore in the West.”
Born in Missouri in 1812, Sarah’s maiden name was long ago lost to history. She grew to be an impressive woman over six feet tall and close to 200 pounds. She was blessed with a well-proportioned if ample figure, and an attractive face framed by dark red hair.  Sarah had a great appetite for life and for men.  She married at least three times and the name of her last husband, a German immigrant in the Second Dragoons who was fifteen years her junior, stuck with her.  A fellow soldier was suitably impressed by Corporal Albert Bowman’s bride.  “Today we are reinforced by a renowned female character,” Private Sylvester Matson wrote in his diary on May 9, 1852. “They call her doctor Mary.  Her other name is the Great Western.”  He described her as a “giantess over seven feet tall,” with a scar across her cheek from a Mexican saber wound.  The camp story was that she had killed the Mexican soldier that wounded her.  “She appears here modest and womanly not withstanding her great size and attire.  She has on a crimson velvet waist, a pretty riding skirt and her head is surmounted by a gold laced cap of the Second Artillery.  She is carrying pistols and a rifle.  She reminds me of Joan of Arc and the days of chivalry.”
Her fame was derived from her heroics during the Mexican War and her name came from the largest steamboat then plying the Atlantic. She had become a national sensation for her actions at the siege of Ft Brown at the outbreak of the Mexican War in 1846.  She followed Zachery Taylor’s army to Monterey where she opened a thriving business that catered to the many varied needs of the soldiers.
When the war ended she moved her business north to El Paso where famed Texas Ranger John “Rip”Ford met her.  “On our side an American woman known as the Great Western kept a hotel. She was very tall, large and well made,” Ford related of his 1849 encounter.  “She had a reputation of being something of the roughest fighter on the Rio Grande.  She was approached in a polite, if not humble, manner by all of us.”
From El Paso Sarah followed the army, and her new husband, Corporal Albert Bowman, to Fort Yuma at the Colorado River crossing.  She soon had an establishment across the river from the fort that fed the varied appetites of the officers and enlisted men of Fort Yuma.  In time a little village grew up around her combination dance hall, restaurant, and brothel called at first Colorado City, and finally Yuma, Arizona.  Lieutenant Sylvester Mowry was one of her most ardent admirers.  “I have just got a little Sonoran girl for a mistress,” he wrote a Rhode Island friend in 1855.  “She is seventeen very pretty [and] for the present she is living with ‘The Great Western’ you remember don’t you, is the woman who distinguished herself so much at the Fort Brown bombardment just before the battles at Palo Alto and Resaca.  She has been with the Army twenty years and was brought up here where she keeps the officers’ mess. Among her other good qualities she is an admirable pimp.  She used to be a splendid looking woman and has done ‘good service’ but is too old for that now.”
It was Sarah Bowman who was entrusted with the care of Olive Oatman, soon after that “redeemed captive” was rescued. She soon departed Yuma to relocate to the Sonoita Valley and by the summer of 1858 she and her girls were well established with Paddy Graydon at Casa Blanca.  The outbreak of the Civil War led to the abandonment of the Union forts in Arizona and so Sarah again relocated to Yuma. She was soon doing land-office business as California Volunteers flocked to the area in preparation for the invasion of New Mexico. Raphael Pumpelly, later to be a famous explorer and Harvard professor, was mesmerized.  “Our landlady, known as the ‘Great Western,’ no longer young, was a character of a varied past,” he wrote in his memoir.  “Her relations with the soldiers were of two kinds.  One of these does not admit of analysis; the other was angelic, for she was adored by the soldiers for bravery in the field and for her unceasing kindness in nursing the sick and wounded.”  The eastern dude watched this magnificent woman’s every movement “as with quiet native dignity, she served our simple meal.  She was a lesson in the complexity of human nature.”

She died in December 1866 from a spider bite and was buried with full military honors at Fort Yuma. The Great Western had indeed lived up to her name.
—Paul Andrew Hutton


"You want to focus on something that matters, something that's meaningful, something that hopefully can enrich people's lives. And paradoxically, the more intimate you make something, the more universal it becomes. Art in its finest form elicits empathy, it gets us to see the world through someone else's eyes. . ."
—Director Travis Knight, in The Hollywood Reporter