The Western Vs. "Westworld"

December 11, 2016
Okay, I just watched the last episode of HBO's first season of "Westworld," and I have one thing I need to get off my chest: I hated the hats. 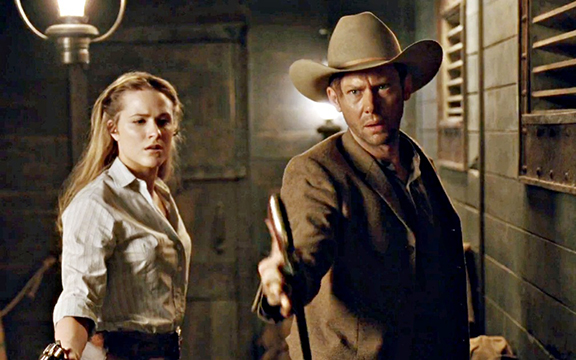 That said, it was kind of the point to the whole damn show. The conceit of the show strip mines the John Ford engineered version of the "settling of the West." it's no accident that one of the chief engineers of the futuristic theme park is named Ford.

According to HBO's in-house numbers, over 11 million people have been watching the series on all platforms (cable, iPads and mobile devices, etc.).

We can agree that the Western story, as created by Owen Wister, Zane Grey and John Ford (especially John Ford!) is a concocted story. It's mostly myth-making legitimized by Frederick Jackson Turner as our country's creation story. I'll have much more to say about the plot and the points made, and not so subtly made, but the bottom line is, this show got people's attention, and since it is a Western, or a half-assed-Western, or, a half-a-wannabe-Western, I believe True West has to step up and weigh in on it. Expect to see more in-depth analysis from our astute contributing editors.

Anyway, back to the hats. They are awful, at least to a historical accuracy fanatic like myself. That the younger version of William wears a big, ol' Who-Shot-JR?-1970s-styled-bull-rider hat just looks silly, to me, but, as my friend Paul Andrew Hutton so aptly puts it, "That is exactly the point. It doesn't matter. Everything is a dream, within a dream."

Here's C. Neil William's take on it: "It's a theme park catering to people's perceptions of the west, and therefore much more about the Western than any real, historical west...and the Western is a screwed-up, hodgepodge of ideas and imagination. So in its way, 'Westworld' is dead on accurate, JR hats included."

Come to find out, according to Sigmund Freud, in his theory of dream analysis, a "hat" stands in for a, well, I'm slightly embarrassed to say this, but it stands in for a "penis." Perhaps this explains why I have always opted for big-brimmed shadetree hat styles.

"Hey, Boze, nice penis compensation on your head, there." In my defense, I have never ducked the accusation of being "all hat, no cattle." Does any of this bother me?

Bottom line: we want to know what you think of the show. So, weigh in and let 'er rip.

"The story that lasts is the best myth. Whoever comes up with the best fairy tail wins. It has nothing to do with what actually happened."
—Natalie Portman
Posted by Bob Boze Bell at 12:56 PM