Billy the Kid & Tupac Shakur at The O.K. Corral

June 24, 2017
So, yesterday I met one of my best models, Jenny Pekarek Smith, at Pita Jungle, across from Desert Ridge, to gift her the big "Pioneer Confusion" painting. 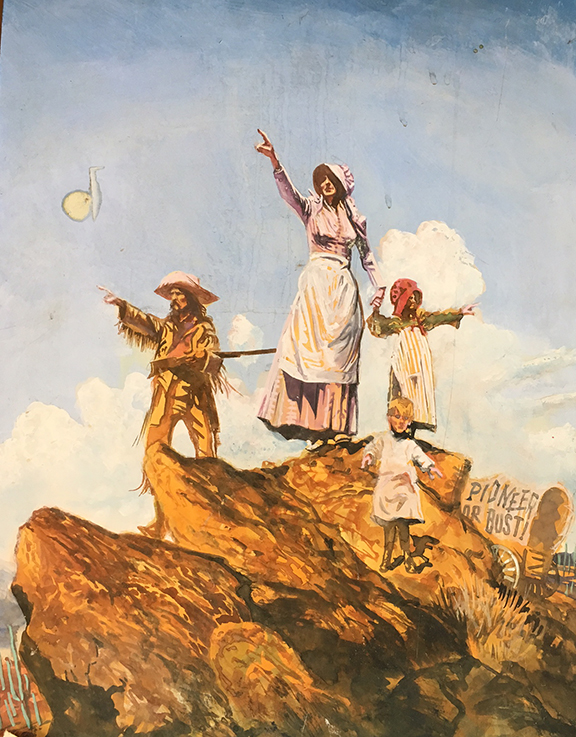 After I left Pita Jungle at one I drove across the street to Desert Ridge mall and walked around. Man, there are SO many closed stores it's scary. Of course it was 114 out, so I had the place to myself. (it's an outdoor mall)

My first stop was Barnes & Noble to support the remaining brick and mortar stores that haven't been killed yet by Amazon. I read somewhere that Amazon now sells 80% of books in the States.

And, of course, my first stop inside the store was to check out the newsstand. 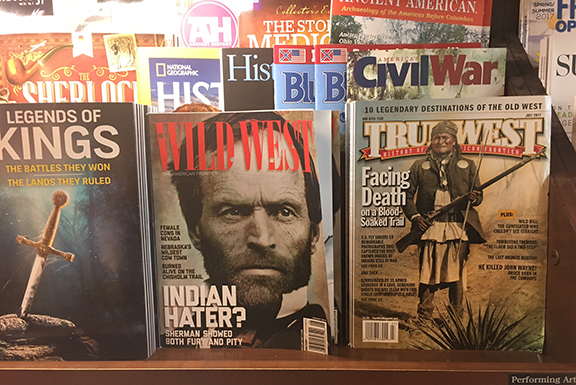 The Indian Hater Faces The G-Man at Barnes & Noble in Desert Ridge.

Good position and, most importantly, full-face-out, as opposed to so many newsstand positions where we are tucked in the back with only a corner of the cover showing. Speaking of Indian haters, I hate that Wild West cover, because it's so strong. Yes, we are competitors and I hate it when they do well. And this is one of the best covers they have done in a long time. Striking, in-your-face, and captivating. Of course, Dan The Man's cover of the G-Man is also strong: he took a tired image that has been run to death and gave it new life. Not easy to do.

I'm always looking for trends and new books, so I loaded up and got some groovy stuff: 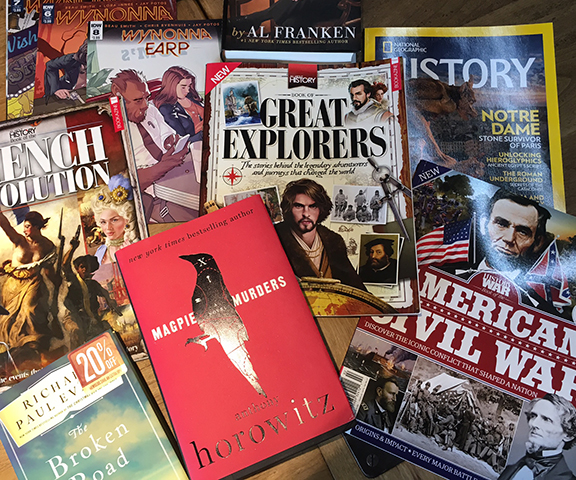 After the book splurge I was in the mood to cool my jets in a movie theater, so I walked the length of the mall to the AMC theaters at the east end and strolled up to the window and said, "What's the next movie I can see?"

The young hispanic girl with the head-set on, behind the glass, seemed rather flustered (I think she was brand new and I might have even been her first customer ever), but she had a shadow-trainer behind her. The trainer leaned over the young girl's shoulder and said "Eyez CC" and I said "What is that?" And she said, "Closed caption for the hearing impaired." And I said "What is the movie about?" And the young hispanic girl didn't have a clue, so the trainer, who was black, leaned over the girl's shoulder one more time with a heavy eye roll, and said, "The life of Tupac Shakur." She said this in a way that told me she didn't think this old, white guy in a cowboy hat had a clue who that even was.

Now, it's true I wanted to blow that snotty, young trainer's mind, but, as is often the case, the actual decision to see "All Eyez On Me" was a little more nuanced. Often in my talks about the O.K. Corral fight I make a point about how many times a day the Earp-Clanton gunfight is re-enacted in Tombstone (that would be every day, every hour on the hour, all day long) and then I muse about who, in our time, will get such attention? I also want to make a point of how bizarre the celebration of the fight in Tombstone would have been to the residents who lived through it, so I say, "I have a hunch it might be the shooting of Tupac Shakur in Las Vegas." This always gets a rise out of the old guys, who think I am being totally ludicrous, but I'm not. I'm dead serious.

So, I did have some interest in seeing how the movie would portray the shooting. Plus, I also think the glorification of Tupac and Notorious B.I.G. (who also has his own movie) is very similar to the myth making process as it involves my Old West outlaw heroes. So, I wanted to see if I could spot a few parallels.

So, here's what I learned. In the myth-making from my era, the Indians are portrayed as savages and the cowboys are brave and honorable. In the Tupac story, the FBI and the cops are savages and the outlaw gangbangers are the ones who have the moral high ground.

Whenever our hero does something deplorable, an excuse is given. Billy the Kid shot Sheriff Brady because he was corrupt and deserved it and when Tupac shot two undercover cops they were beating up a poor, defenseless guy from the hood. (The police version is the two undercover cops were just walking across the street, and, by the way, Sheriff Brady and his deputies were just walking down the street in Lincoln, New Mexico when they were ambushed by Billy and his crew.)

Martyrs are borrowed willy nilly to shore up the cause. In "Pat Garrett & Billy the Kid" when Garrett corners Billy at Stinking Springs, Billy comes out with his arms straight out, emulating Jesus on the cross. When Tupac's mother warns him that great men are always a target by the evil U.S. government and their lives are snuffed out at a young age, his sister jumps up and says, "That's what they did to Geronimo!" I laughed out loud in the theater at this line, since the G-Man lived a long life and would have been hanged by the Arizona authorities if the U.S. government hadn't saved his bacon and sent him to Florida.

When we love a historic character we think all the aspects of our hero's life should be included in the movie. This is probably why "The Assassination of Jesse James by the Coward Robert Ford" is three hours long.  All Eyez On Me goes on for two-and-a-half-hours. Only the die-hards are going to sit through that. For the record, I saw "The Assassination of Jesse James" with maybe four other people in the theater (Kathy went and saw "Larry Clayton") and I saw "Eyez On Me" with two other couples. (Kathy is in Germany so she wouldn't have to see it) Do the math, Mr. Passion Project.

The random location of a senseless act of violence gets fetishized. When the Earps and Holliday walk down to confront the cowboys, they meet in a sideyard, 18 feet wide. Today it is a shrine. On September 7, 1996, Tupac and Suge Knight are stopped at the intersection of Flamingo Road and Koval Lane just off the strip in Vegas when a white Caddie pulls along side and shots ring out. Mark my words, there will be a shrine and daily re-enactments there on September 7, 2096.

The movie makes the claim that the murder has never been solved. But this is suspect, since most Tupac buffs believe Orlando "Baby Lane" Anderson was the shooter. Tupac had attacked him earlier in the lobby of the MGM Grand, walking up and punching Anderson in the face, allegedly because Orlando was flashing gang gear. (he was a Crip) Wyatt Earp attacked Tom McLaury before the fight on Fremont and knocked him senseless with the butt of his pistol because Earp recognized McLaury as being part of the cow-boy gang, who, by the way, headquartered at the Grand Hotel on Allen Street when they were in town. The Cow-boys & The Crips, the MGM Grand and The Grand Hotel, crazy, amazing, no?

I could go on, but you get my drift.

"History doesn't repeat itself, but it does rhyme."
—Mark Twain