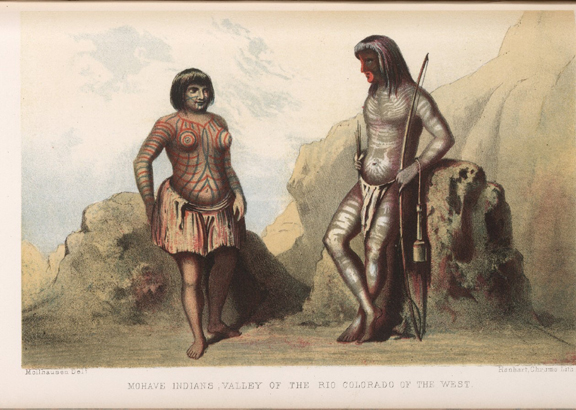 Mojave Indians as illustrated by Balduin Möllhausen. Mollhausen was the artist and topographer accompanying the party led by Lieutenant Amiel Weeks Whipple in the Pacific Railroad Survey Explorations of 1853. In his diary he tells of Mojave mothers bringing their babies to him to paint. He said he painted them up with wild designs, which the mothers loved.


A Wild And Crazy Tribe!
Let's start with the nickname they gave Olive Oatman—Spantsa—which Wikipedia euphemistically translates as "unquenchable lust or thirst." A more literal translation is, "rotten vagina," or "sore vagina." And vagina is the nice way of saying what they really meant. Get the picture?

This ribald sense of humor even translates to the naming of local geography. A promontory point near Parker, Arizona is known by the Mojaves and Chemihuevis as, well, what do you think it looks like? 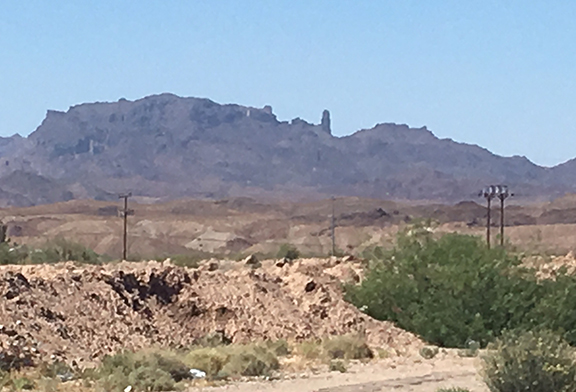 A clever—and accurate—description, if you ask me. The anthropologist, Kroeber studied the naming practices of the Mojave and reported they often used "names of the most undignified sort. . .there is not the least shrinking from obscenity. . ." and that Mojave men were prone to adapting names with sexual connotations "in the hope of attracting or impressing women."

So, what else is new?

Author Brian McGinty ("The Oatman Massacre") gives us this scholarly take on their sexual mores: "The Mohaves were an uninhibited people who engaged in sexual relations without embarrassment. Their traditional dress was scanty and would certainly have been regarded by most Christians as immodest." McGinty goes on to say, "Children habitually went naked, while adult males wore nothing but a breech cloth and perhaps a blanket thrown round their shoulders in cold weather. Adult females wore skirts of strands from the soft inner bark of willow trees but were naked above the waist. The Mohaves had no formal wedding ceremonies: if a man and woman wished to form an intimate relationship, they simply lived together; they were divorced when one or the other left the marriage house. Old Mohaves did not exhort the younger generation to chastity; on the contrary, they encouraged them to 'enjoy themselves' while they could."

Add to that, the Mojave's feelings of superiority: Mojaves felt that the whites they met were puny and uptight and inferior to the Mojaves in every aspect, except one: The only thing they thought the anglos were superior at was in making weapons.

While it's probably a trait we all share (our tribe is better than your tribe), the Mojaves carried some exceptional genes giving their conceit some merit. The head man, Irataba, was over six feet tall, and, according to Whipple's diary notes, his friend Cairook stood six foot six! The average height of anglo males in that era was five feet seven. So, they were big, tall and impressive. And, boy, did they like to have a good time. And, by "good time" I mean having sex.

Enter The Talking Vaginas
When the Whipple expedition entered the Mojave Valley on horseback they had been on the trail for months and each man had a full growth of beard. All the Mojave women giggled when they saw the furred-out Americans and one of the women even approached and wanted to touch the whiskers. When she laughed and said something to her friends, who also laughed, one of the interpreters told Whipple they had never seen such bushy faces (their men were all bare-faced). He said the Mojave women called them "the talking vaginas." Such was the bawdy sense of humor of the Hilarious Mojaves.

"To travel is to discover that everyone is wrong about other countries."
—Aldous Huxley