June 17, 2017
After five years in captivity, it looked like Olive Oatman was finally going home. It was February of 1856 and after two nights of heated negotiations with the Mojaves, in which threats were made on both sides, the head Mojave finally relented and said the captive could go back to the Americans.

However, there was one additional problem: Olive and her savior, an Indian called Francisco who had come to gain her release, had to travel 250 miles south to Fort Yuma, and even though he had help from a brother and two cousins (all four were Yuma warriors) there would be rough sections of the journey where they would have to swim through rugged canyons that choked the passage right down to the water. The area around Parker Dam comes to mind.

According to Olive, they had to swim in the frigid water ten different times in order to make it through. Fortunately for her, in her time with the Mojaves she had learned to swim as the river tribe spent most of each summer in the water to escape the heat and they were known far and wide as superior swimmers. 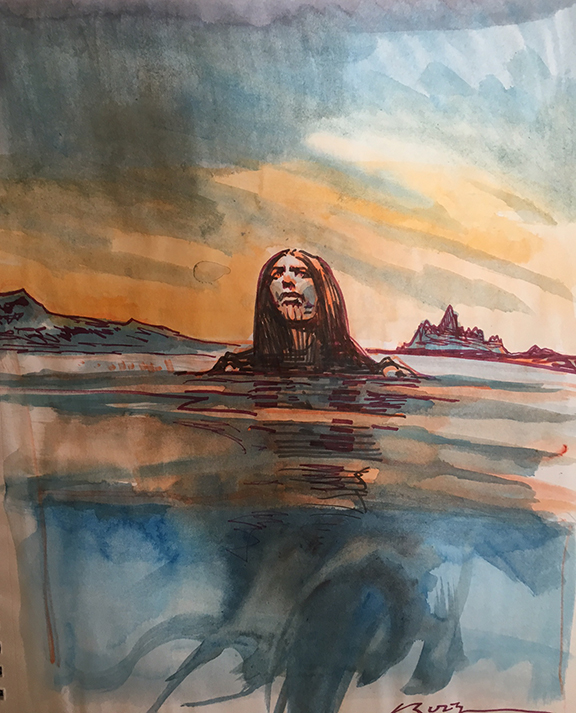 This brings up an interesting dilemma: assuming her guides carried firearms (this is early—1850s, and many of the Indians still carried primitive armament), how did Francisco and his crew keep their weapons dry? If someone has to wade into the Colorado River and swim downstream, for a mile or two, they really couldn't prop their rifles, knives, or even their bows and arrows, on their heads. Could they? It's unclear if they had horses or were all on foot. Of course, horses would complicate the logistics even further. Were they swimming their horses for long stretches? Seems a bit crazy to me. Any ideas?

"You can lead a horse to water, but you can't really make him a flotation device."
—Old Vaquero Saying
Posted by Bob Boze Bell at 10:18 AM