A Little Love for Barren Pretentiousness

December 13, 2017
Sometimes, when I see photographs of the Southwest taken in the first half of the Twentieth Century it makes me happy all over. 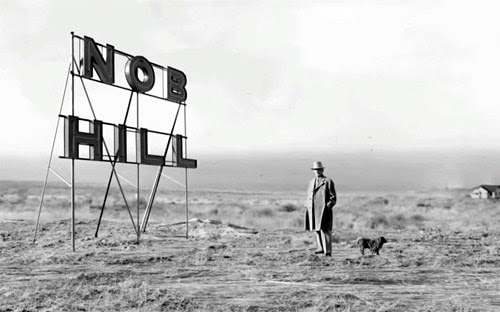 The lonely sign, the disinterested dog, the lone house in the mid-distance with no vegetation, or fence even, gives me a warm feeling for a time that is gone forever.

So much of New Mexico and Arizona looked like this when I first saw it, or rather, when I was old enough to remember seeing it. I have a hunch the feelings this photo produces in me were planted at an even younger age. We traveled often between Kingman and Iowa for the better part of three decades and I saw many scenes like this. In fact, I'm sure we drove right by this sign, or, where this sign was, because it's on old Route 66.

Of course, Nob Hill today is a Hipster address on East Central and looks a lot like Silver Lake, California, or Fourth Avenue in Tucson, or Mill Avenue in Tempe, or South Beaver in Flagstaff, or, well, you get the picture. There are still plenty of barren places in the West but as I totter into my seventh decade, I damn sure miss the ones that have been swallowed up by urbanization.