December 9, 2018
It was twenty years ago this week, I started painting a new cover portrait. 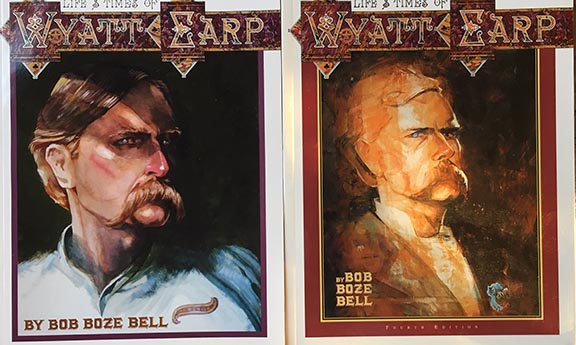 The first through the third edition of
Wyatt Earp, at left, and the fourth.

December 10, 1998
Started a new cover painting of Wyatt Earp for the fourth edition, going on press soon. Also finishing the timeline for my next book, "Bad Men."

When I was in junior high, we played Parker and on the bus trip from Kingman down there (this is in 1961, prior to Lake Havasu and we had to come in via Needles and Vidal Junction), as we approached the Colorado River from the west I looked out the bus window and saw this giant cutout of Wyatt Earp and this shack was there and I thought to myself, "What was Wyatt Earp doing way out here?" Well, it turns out Wyatt Earp wintered along the Colorado River and the Vidal area for 22 years, while he only spent 22 months in Tombstone!

This was in the small community of Drennan, which later changed its name to Earp, California.

"How many a man has dated a new era in his life from the reading of a book?"
—Henry David Thoreau