June 20, 2019
One of the striking things about Tucson is that you can be in the middle of the sprawling metropolis and still feel like you are out in the country. This is the view out my hotel window at the Hyatt on east Broadway. 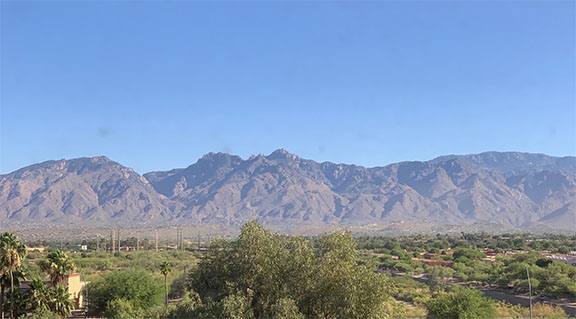 This morning I was talked into taking an old-time photo downstairs in the lobby of the hotel. The concessionaires were set up to take advantage of the Western Writers of America Convention and they must have thought—correctly—we'd like to "dress up" Old Westy and have our pictures taken. However, I declined all the prop clothes, and when they asked me if I wanted to pose with a forty-five or a rifle I said I would rather hold my sketchbook because that is my weapon of choice. On the other hand, when the photographer asked me if I wanted to hold a bundle of dynamite I agreed. I put the "TNT" in my coat pocket and put my boot up on the strongbox. The smirk is not authentic, but the unlit fuse is. 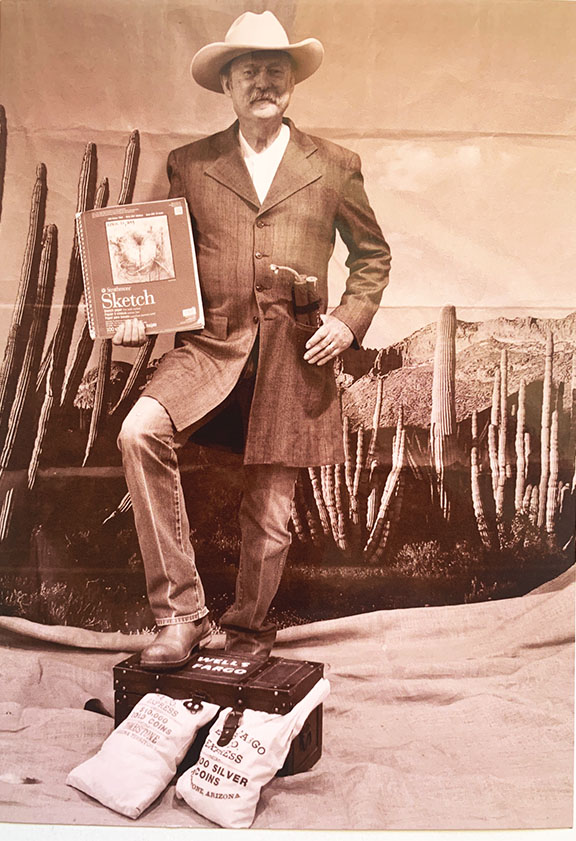 At ten thirty I attended a session on Western comics featuring my comix comrade Jeff Mariotte. In fact it was Jeff's graphic novel series "Desperadoes" that billboarded the panel discussion. 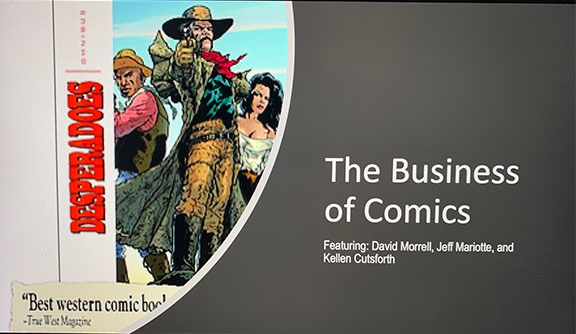 Note the True West plug at bottom left. On the panel with Jeff was David Morrell who wrote "First Blood," the story that became the "Rambo" franchise. At the end of the session I asked Mr. Morrell to give us the inspiration and genesis of the story and he painted the back story of how violent 1968 was in America with the assassinations (MLK and RFK) and over 200 riots, including the Chicago convention riots and Detroit and Washington DC riots, mere blocks from the White House. When Morrell watched the news and saw Walter Cronkite reporting on the Vietnam War and then the rioting he recognized they weren't different stories, they were the same war and he wondered about a returning vet having a conflict about what he had become. His inspiration for the vet was Audie Murphy, who returned a hero from WWII, but damaged. Originally, Steve McQueen was scheduled to play the lead, according to Morrell, but the studios didn't think audiences would buy the 40-year-old as a returning vet. The irony is that "Rambo" is being rebooted even as you read this (#5) and will be played by the 71-year-old Sylvester Stallone. Everyone laughed at the irony.

"I believe it is possible to tell stories about the vanished past that bear on the immediate present. Awaken the dead and make whole what has been smashed."
—Walter Benjamin