June 7, 2019
You may be wondering, as I was, where the hell did the original drawing of the Heatwave Cafe end up? 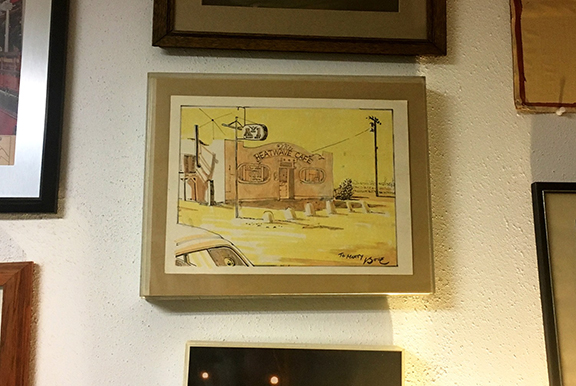 This was gifted by me to Marty many moons ago. Marty has just retired from radio after a fifty year run!

Speaking of the Heatwave Cafe, I am in the process of reviving this guy: 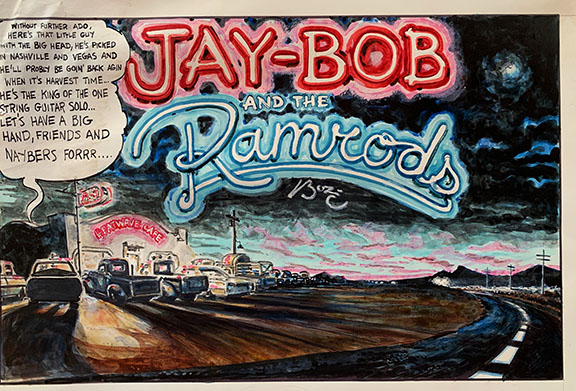 "The Return of Jay-Bob and the Ramrods"

If you'll remember, we last saw Jay-Bob live at the Heatwave Cafe back in about 1976. Here's what has happened since.

His shortness—he's five two—probably saved his life more than once because honkytonk bullies couldn't bring themselves to punch that low. On the other hand, perhaps making up for his size, Jay-Bob has a massive ego, which he fails to hide, even to this day. His long suffering wife, Mert, still thinks he has a shot in Nashville, even though, at 83, the little git-picker has arthritis so bad he can't do more than three chords at a time without stopping to rest. He stopped smoking in '87 but it was too late to save his lungs.

Jay-Bob always hated the Beatles and the Stones and everyone who came along afterwards, especially Eric Church and Hank Williams, Jr.

His favorite saying, at every gig he has ever done, is, "Close enough for government work," which he says with a chuckle during each and every tuning.  The fact of the matter is, he isn't even close to being tuned and never has been.

The legendary steel guitar player Buddy Piles, once threatened to beat Jay-Bob to a bloody pulp, by unscrewing one of his steel guitar legs and waving it like a baseball bat at Jay-Bob's head while Jay-Bob butchered "Take The Ribbon From My Hair" for the umpteenth-hundred time. Buddy was restrained by the drummer, Snowy Keplar, and lead guitarist, Richy Fenderson, and had to be physically removed from the Moose Lodge on east Wilmot Road in Tucson. The two haven't spoken since, but rumor has it, Buddy will be on stage at the memorial for Snowy at the Heatwave Cafe.

"Some men tell you all they know, and keep on talking."
—Honkytonk Sue