June 28, 2019
It was 47 years ago today, Dan The Man Harshberger and I made a momentous decision. 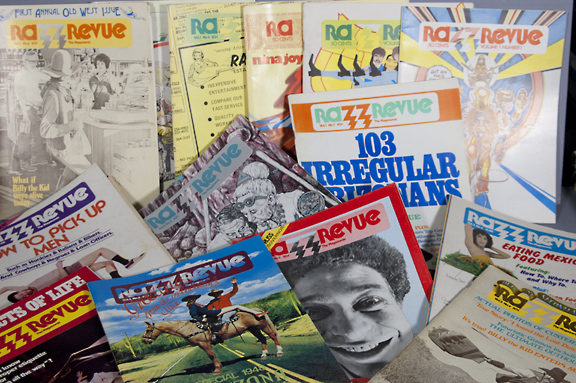 All 16 issues of the Razz Revue on display

"On June 28th, 1972, we decided to produce something that would be a collector's item and worth a lot of money someday. We haven't decided what yet. In the meantime we created and published the first issue of Razz Revue."
—My first editorial in the first issue, Vol. 1, No. 1

We are now working on issue #17. Yes, we had a bit of a dry patch but doesn't everyone? As our Kingman Junior High School basketball coach liked to say, "Grandma was slow, but she was old."

Or, as my father, Allen P. Bell, was fond of saying, "Better late than never."

Or, as my muse, Kathy Sue Radina, puts it, "This is a totally lame project."

"The arc of history bends toward delusion."—Stephen Kotkin
Posted by Bob Boze Bell at 8:24 AM