A White Guy Dressed Like An In-din at The Battle of The Little Bighorn?

December 16, 2019
I'm hot on the trail of the Sharpshooter Ridge shooters. Here's what got me riled up. After my interview last week with Robert M. Utley, I decided I am going to do a Classic Gunfight on Charlie Windolph and the fight on Reno Hill during the Battle of The Little Bighorn. This will support Bob's interview with Windolph about the battle and also help fill in some gaps in the story.

In that fight, the trooper next to Charlie was killed with a shot through the heart and Windolph's Springfield rifle took a bullet to the stock, shattering it, and wounding him. Windolph tells of the shooter being out of range of their rifles (600 yards). So I sent the following request to my good friend, and former park ranger at the Little Bighorn. He lives in Rapid City, South Dakota.

Jim Hatzell Request
Hey, Jim, I want to do a portrait of Charlie Windolph holding the shattered stock of his rifle, as if he posed for a photograph after the Little Bighorn Battle with his new sergeant stripes and his battered Springfield. Of course,  I want him to be wearing the appropriate jacket and uniform he probably wore that day,  but more importantly, how would a shattered stock look? Any ideas? 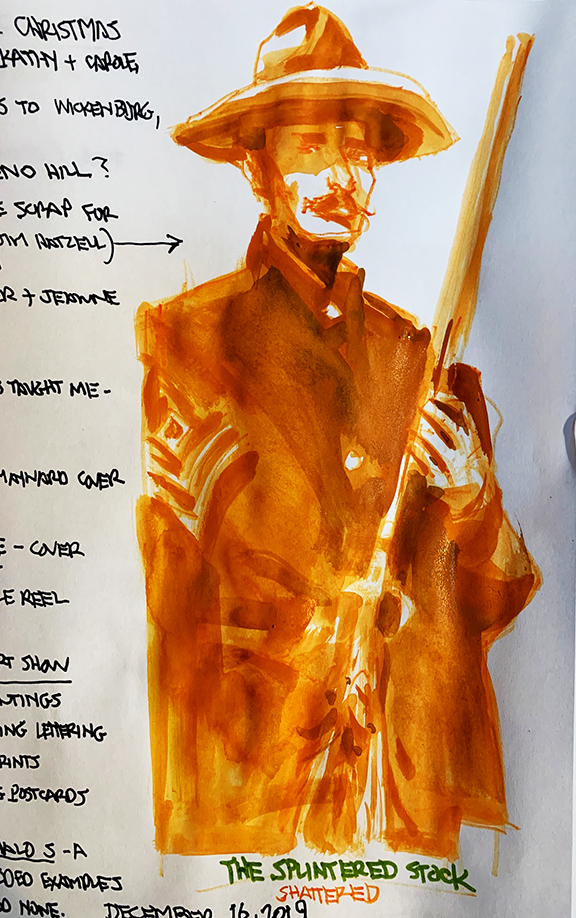 I got this reply from Jim:

"The original 1873 Springfield carbine had a serious design flaw with the stock. They were made too skinny and were very prone to breaking in that spot. I myself had a wreck on horseback in Wyoming and came off into a pile of rocks and my carbine broke in half right at that point. I was hurt pretty bad and did not take any photos of the broken weapon. The carbines were modified to take a stock that was much stronger. I'll see if I can find a photo that shows this."
—Jim Hatzell

Jim also sent me a flurry of correspondence from his historian friends weighing in on the subject of Sharpshooter Ridge.

"Bob is right about the fact that it is racist to say the warriors could not hit much. The only mention of that is Edgerly who noted that when warriors poured over Weir Point and missed him. They did not miss Vincent Charley. Mute point and observation. There was a white guy dressed like an Indian in a tree burial near Squaw Ravine (to the west of it). Showed up in a map that is not on my book. No way to match him to Sharpshooter. Windolph talks about a different Sharpshooter to the south of his position with H company. Do not confuse the two.
Important to remember Windolph was with H Company farther away than Ryan by about 100 yards. The maximum range of the Springfield could be longer than 600 and quite easy to hit Sharpshooter if volley fired.
I have taken crowds up on top of Sharpshooter Ridge and taught them something Bob needs to know. The M company line was 600 yards away and the line of men lying down was perpendicular to the sniper. 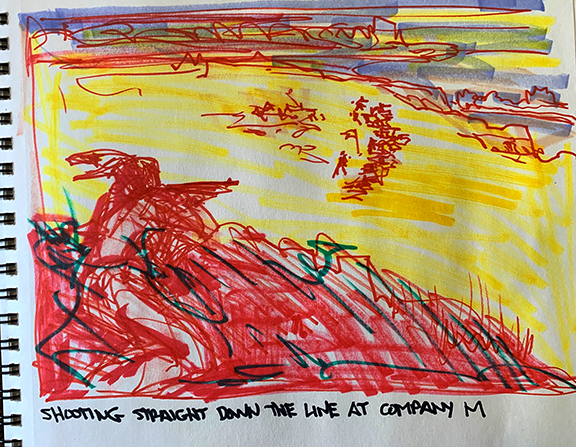 "Shooting Down The Line" 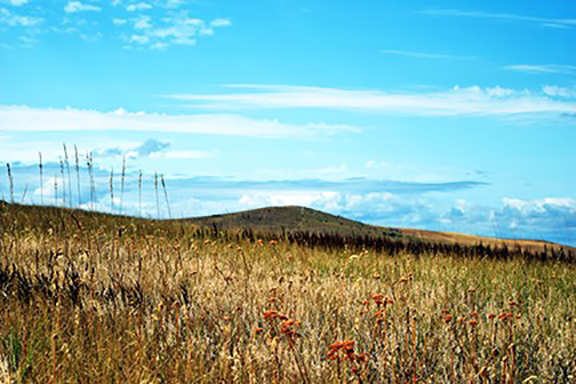 A modern photo of Sharpshooter Ridge

You and I could have hit soldier after soldier if you got any type of line of sight lined up. You couldn’t miss basically as you were looking at a solid blue line of blue coat bodies in a straight line lying side by side. It was like standing next to a skirmish line and shooting down it...you are going to hit someone even if you are not a good shot. Readers think that the sniper was hitting soldiers looking at the hill, but that is incorrect. You might remember Ryan said they pivoted right and turned and fired. He had been receiving flank fire from the hill. With a good rifle all you had to do was rest it on a rock and shoot straight and you would hit something. You were looking at one long line of soldiers. This is an equation unknown except for me and the few I have taken up there."
—Michael Donahue

Now, about that white guy dressed like an In-din who was found on a tree burial? What the hell is that about? Little Big Man, indeed!

After the Battle of Little Bighorn, Springfield Armory was assigned the task of providing a cleaning rod for the carbine version that could also be used to remove stuck cartridges. A three piece steel rod was designed that fit into the butt. This required a new butt plate specifically for the carbine, as the longer rifle already included a ramrod and did not need these modifications.

"You felt like you were somebody when you were on a good horse, with a carbine dangling from its small leather ring socket on your McClelland saddle, and a Colt army revolver strapped on your hip; and a hundred rounds of ammunition in hyour web belt and in your saddle pockets. You were a cavalryman of the Seventh Regiment. You were a part of a proud outfit that had a fighting reputation, and you were ready for a fight or a frolic."
—Private Charlie Windolph, "I Fought With Custer"