December 21, 2019
So, I want to illustrate Private Charlie Windolph and the three other "German" troopers who were ordered by Major Benteen to draw fire, so the water carriers could descend down to the river and retrieve much needed water for the pinned down soldiers on Reno Hill. 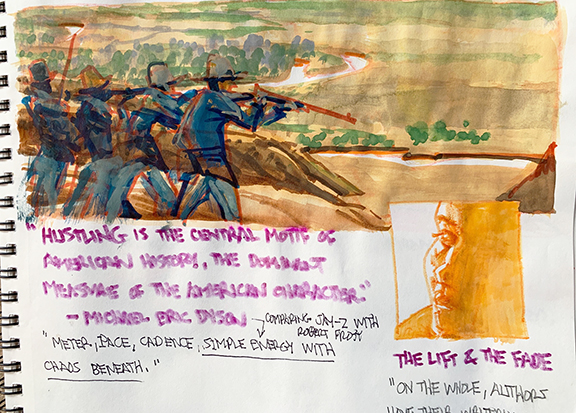 George says they "stood there" and fired down at the Indians below and I am tempted to draw them standing tall, all four of them, and firing down, but as I am doing the sketches I just can't help but think this is a tad too heroic—and, perhaps stupid? Might one of them, at the very least, be down on one knee? With another one crouching and moving to get another shot off? I was just curious about what the longtime researchers and historians would think of this, so, I asked them. 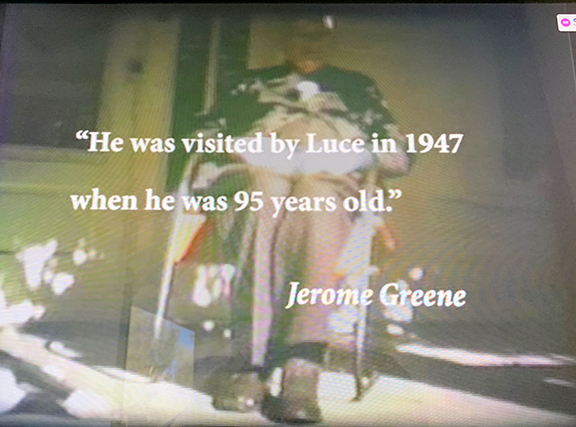 Thanks to Bob Reece, this is a screen grab off of a 1940s film taken by Luce of Charlie Windolph. This is the same porch, Robert Utley, met Charlie on a year, or two, later.

"We can only go with the historical record by Windolph...'we were to stand up and not only draw the fire of the Indians below, but we were to pump as much lead as we could into the bushes where the Indians were hiding, while the water party hurried down to the draw...None of is four were wounded, although we stood exposed on that ridge for more than 20 minutes, and they threw plenty of lead at us.' Po 104-105 'I fought with Custer.' Sounds to me that Benteen ordered them to stand."
—Michael Donahue 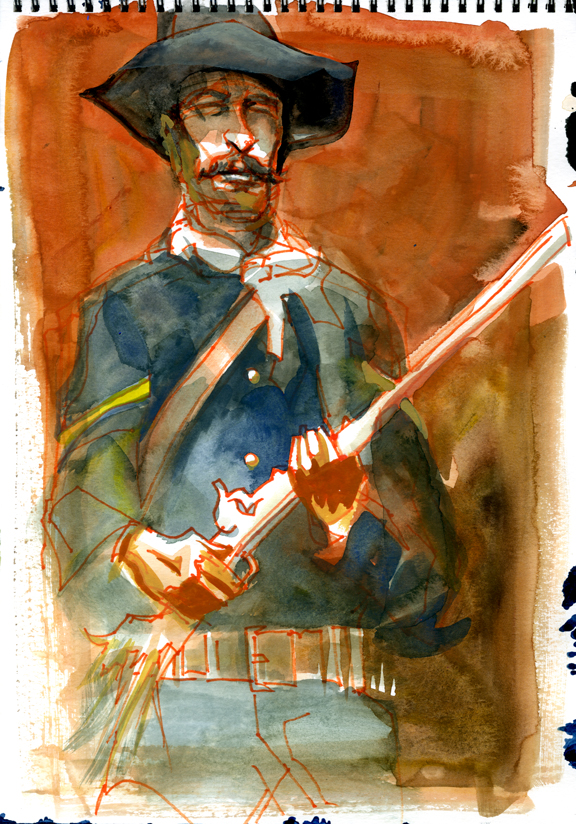 "Charlie says that the purpose of the four was to draw the fire of the warriors in the brush along the river, warriors who would otherwise fire at the men coming down the ravine to secure water. That would require all four to stand up."
—Robert M. Utley 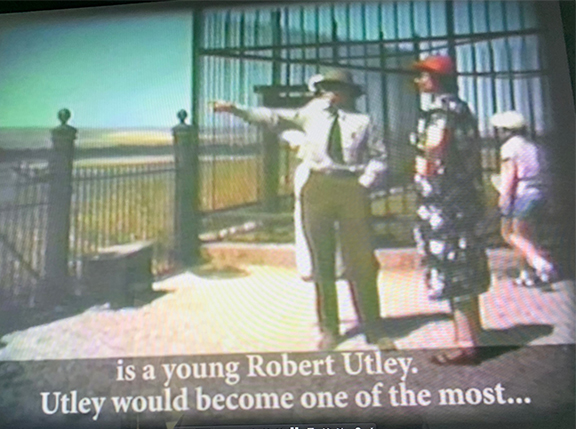 From the same film Bob Reece sent me.

Then, Robert Utley sent me an interview with Charlie and here are Windolph's actual words:

"Finally Captain Benteen called for volunteers. I think there were seventeen of us altogether who stepped forward. He detailed four of us from 'H' [Company] who were extra good marksmen to take up an exposed position on the brow of the hill, facing the river. We were to stand up and not only draw the fire of the Indians below, but we were to pump as much lead as we could into the bushes where the Indians were hiding, while the water party hurried down to the draw, got their buckets and pots and canteens filled, and then made their way back. It just happened that the four of us who were posted on the hill were all German boys: Geiger, Meckling, Voit and myself. None of us four were wounded, although we stood exposed on that ridge for more than twenty minutes, and they threw plenty of lead at us. Several of the water party, however, were badly wounded, although we kept up a steady fire into the bushes where the Indians were hiding. Each of us was given a Congressional Medal of Honor."

"To us troopers it was a good deal like going on a prolonged picnic."
—Charlie Windolph describing the Black Hills expedition, at least in the beginning

"We'd make great campfires and almost every evening there'd be a band concert. General Custer was mighty proud of our Seventh Regiment band. They were mounted on white horses and he had them along on all his expeditions and campaigns."

"We made only fourteen miles that first day, and camped on Heart River."

On the second day out they only made about 11 miles because of heavy rain. "We had our own beef herd along, and always they'd slaughter enough beeves for the following day's use."

"I don't believe many of the troopers were very worried. We knew there'd be some hard fighting, but a soldier always feels that it's the other fellow who's going to get it. Never himself."
—Charlie Windolph, reflecting on the events of June 22-25

"We were tired and dirty and hungry. Our horses hadn't had a drink of good water since the day before and we weren't much better off."
—Charlie Windolph, on the events of Sunday morning, June 25, 1876

"We were trotting briskly now, and there was a good deal of excitement. Horses seem to know when they're heading into trouble the same as men do and some of the mounts were anxious to run away, tired as they were."
—Charlie Windolph, on the approach to the Little Bighorn

"They'd had a a lot of men killed, and it had only been the grace of God, and the bad aim of the Indians, that had let them escape across the river with their lives."
—Charlie Windolph, describing the disorganized retreat towards Reno Hill

Most of the Indians who repulsed Reno's charge and followed the commander and Benteen's men up on the ridge, disengaged and galloped to the northwest to join the fight with Custer. "Except for an odd hostile shot, fired from a distance, there was no firing near us now. . .we could hear the sound of distant firing down through the hills and valleys from that direction. Custer must be down there."

"As I recall, Reno had seven wounded men, some of them in pretty bad shape. But altogether he now had around 310 effective, which was a little more than half the total number in the regiment. Custer had around 200 men with him."
—Charlie Windolph

"Hurriedly Reno, with Benteen helping him with advice and suggestions, posted his forces for the coming attack. In the center in a slight depression the horses and mules were staked out, and an inadequate little field hospital was established. But it was impossible to shield the men and stock from the Indians firing from a hilltop off to the east. Animal after animal was killed, and men were hit. It was tough not to be able to do something." 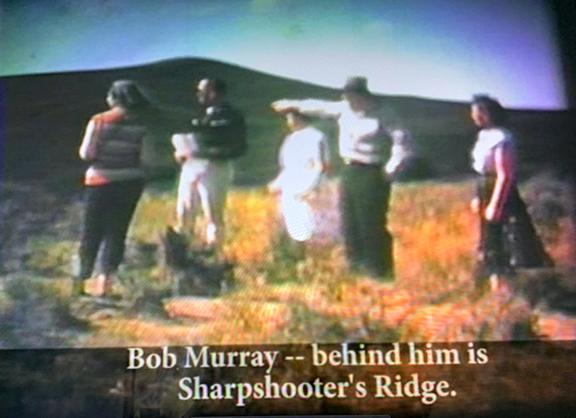 Park ranger Bob Murray showing tourists in the 1940s, the Reno defense positions, and yes, that is Sharpshooter's Ridge in the background where so much of the deadly fire, described above, was coming from.

"My own Troop 'H' was posted to the south, in a dangerous position, bordering the river. There was higher ground behind us and we were as helpless as the animals and wounded men to protect ourselves from fire. But we were not yet fully aware of our peril as we hurriedly piled up such inadequate barricades as we could find. We used pack saddles, boxes of hard tack, and bacon, anything we could lay our hands on. For the most part it wasn't any real protection at all, but it made you feel a lot safer."

"There was no full-fledged charge, but little groups of Indians would creep up as close as they could get, and from behind bushes or little knolls open fire. They'd practice all kinds of cute tricks to draw our fire. Maybe a naked redskin would suddenly jump to his feet, and while you drew a bead on him he'd throw himself to the ground. Then they'd show a blanket or a headdress and we'd blaze away, until we learned better."
—Charlie Windolph, in his classic book, "I Fought With Custer"
Posted by Bob Boze Bell at 9:32 AM