Who Was The Mysterious Sniper On Sharpshooter's Ridge?

January 7, 2020
Tommy Bell and family have been here for for two weeks and they return to Thailand this afternoon. Grandma Goose is accompanying them to LA to help them board an international flight back to Asia. She returns from LA on a midnight flight to Arizona.

That is called Love, with a capital L.

Meanwhile, I'm trying to condense and make sense of Private Charlie Windolph's narration of the Reno Hill fight at the Little Bighorn for the next Classic Gunfghts. I'll probably start here: 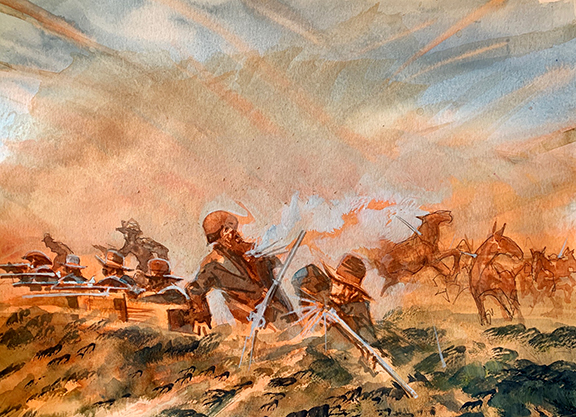 Raining Bullets
Private Charlie Windolph of H Company hunkers down as a hail of arcing bullets rains in on Reno's command. Private Jones is hit in the heart and dies instantly while Windolph has his rifle butt stock split in half by a bullet.

I want to let The Last Man Standing On Reno Hill tell the story as much as possible.

So, what is all this talk that the Indians at the Little Bighorn fight were not good shots? I grew up with In-dins and they are as good as any white guy at sports, if not better. It has always seemed rather racist to me. So I asked one of the experts and here is what he has to say:

"You are right about the fact that it is racist to say the warriors could not hit much. The only mention of that is Edgerly who noted that when warriors poured over Weir Point and missed him. They did not miss Vincent Charley. Moot point and observation. There was a white guy dressed like an Indian in a tree burial near Squaw Ravine (to the west of it). Showed up in a map that is not on my book. No way to match him to Sharpshooter's Ridge. Windolph talks about a different Sharpshooter to the south of his position with H company. Do not confuse the two.
"Important to remember Windolph was with H farther away than Ryan by about 100 yards. The maximum range of the Springfield could be longer than 600 and quite easy to hit Sharpshooter if volley fired.
"I have taken crowds up on top of Sharpshooter's Ridge and this is something you need to know. The M company line was 600 yards away and the line of men lying down was perpendicular to the sniper. You and I could have hit soldier after soldier if you got any type of line of sight lined up. You couldn’t miss basically as you were looking at a solid blue line of blue coat bodies in a straight line lying side by side. It was like standing next to a skirmish line and shooting down it...you are going to hit someone even if you are not a good shot. Readers think that the sniper was hitting soldiers looking at the hill, but that is incorrect. You might remember Ryan said they pivoted right and turned and fired. He had been receiving flank fire from the hill. With a good rifle all you had to do was rest it on a rock and shoot straight and you would hit something. You were looking at one long line of soldiers. The sidewalk is clearly seen from the hill and where M company was lying. This is an equation unknown except for me and the few I have taken up there. Hope this clarifies."
—Michael Donahue, author of "Where theRivers Ran Red: The Indian Fights of George Armstrong Custer" 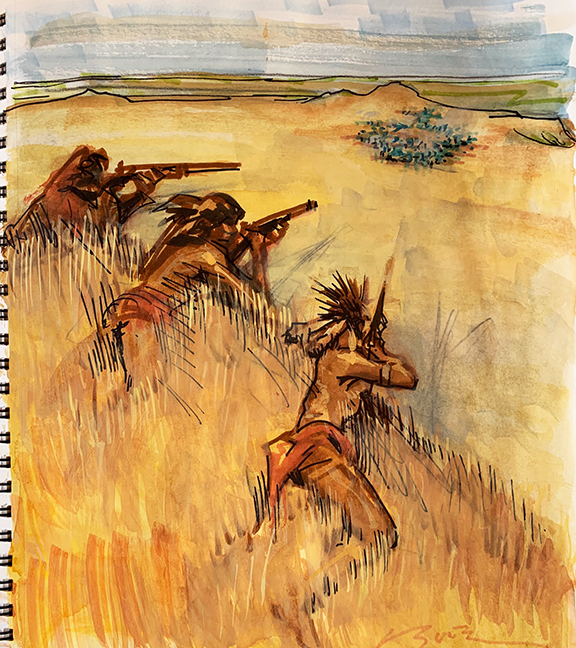 Rifle Range
Just to put all of this in perspective, a Winchester has about a 300 yard range (for accuracy), while a Springfield has about a 600 yard range and Windolph's narrative mentions a bluff where the Indians are firing from being approximately 900 yards away. That is 9 football fields away! Still, as Michael Donahue points out, if you are arcing your shots and your target is a hundred yards wide and five hundred yards deep, you are bound to hit something or someone.

"Suddenly we caught glimpses of white objects lying along a ridge that led northward. We pulled up our horses. This was the battlefield. Here Custer's luck had finally run out."
—Charlie Windolph who volunteered to ride along the bluffs from Reno Hill to see what had happened to Custer