How Do You Pronounce "Ake"?

January 31, 2020
We all know what a minefield it is to pronounce Western names and places. It's not A-Joe, it's Ah-hoe. It's not Mongolian, it's Muggy-own.

It's even crazier how place names are mangled by the locals until it becomes the law. The locals pronounce it as Dew-boyce, even though the place is a French term, Dubois, and the French pronounce it as Duwb-wah. And here in Arizona it's pronounced Press-kit by the locals even though the historian it's named for pronounced it as Press-cott. In New Mexico, the locals have mangled Henry David Thorough's last name to Threw. And even when you remind them their berg is named for Henry David Thorough, who pronounced it as Thoe-row, they insist on the mangled version. Go figure.

All of which brings us to a curious name in the margins of history. I'll let Matt explain:

"Between gigs with John McEuen (the longtime banjo guy with the Nitty Gritty Dirt Band) I produce audiobooks for Simon & Schuster. I'm working on one now called THE THREE CORNERED WAR, and it has a lot of Arizona names in it... and I'm having special trouble with one of them. Do you have any idea how the "Ake" in Felix Grundy Ake, or the Ake-Wadsworth wagon train would be pronounced? I'd be much obliged... hope all is well!
—Matt Cartsonis 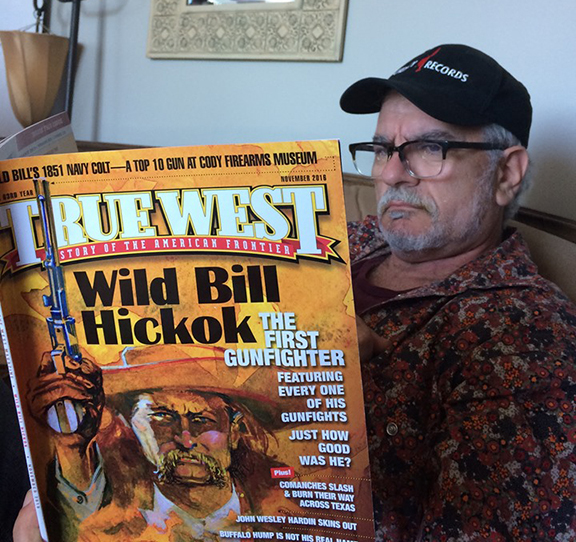 Matt Cartsonis With His Fave Mag

I have always pronounced Ake as a rhyme of Jake, but then I have never heard anyone say it out loud, which is one of the liabilities of reading.

In the Billy the Kid story, I always assumed Tunstall's bunk buddy, Widenmann was pronounced Wide-en-man, until I had a roommate in college with the same name and spelling and his family pronounced it as Weed-ah-man.

So I sent out this question to my historian friends and they all concurred that it's Ake as in Jake for the go to pronunciation.

Still, there have been many times we historians have been subverted and proven wrong by family pronunciations and there but for the grace of God, go I.

"Grace is the WD-40 of life. It changes us, heals us. Get your sense of humor back. Laughter is carbonated holiness."
—Anne Lamont