The Kid Had to Be Restrained

We're waiting for printer proofs on the BTKIII book and, unfortunately for my production team, every day they wait is another day I find something better to go in the book. I call it "trading up," but I have a feeling my staff calls it something approaching fed up.

Found an early scratchboard (circa 1995) looking for something else this morning. Thought it had some potential, so I re-tweaked it. 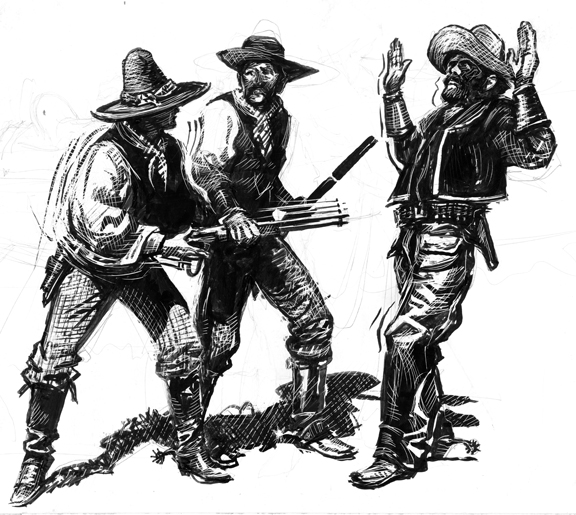 "The Kid Throws Down"

Illustrates when the Kid had to be restrained from shooting Morton and Baker (the two were in the posse that shot and killed Tunstall) after they surrendered on the condition they not be harmed, on March 6, 1878.

Postscript: The Kid and the rest of the posse had their way with the two prisoners later, on the way to Lincoln. Both were shot and killed. Sent it off with a Section tweak to my production manager, Robert Ray. I'm sure this thrilled him beyond belief.

Still noodling the concept of a polarized nation and how that effects, or, better yet, how that is reflected in the West. 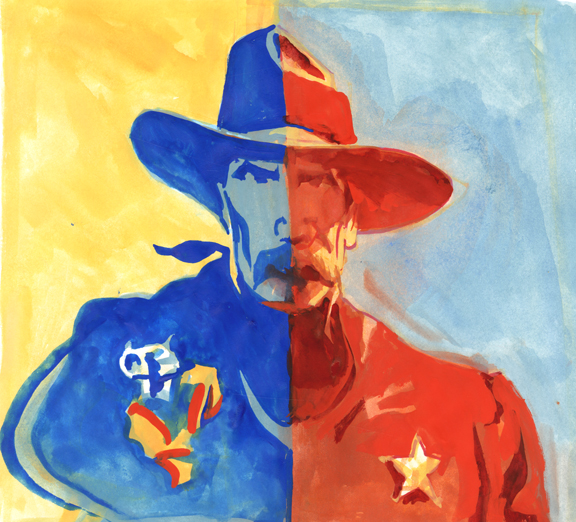 Not there yet, but I think there's a poster in there trying to get out. Perhaps he's trading up?

"I would not want to be cremated. It seems impolite. I feel the least I can do at my own funeral is show up. Everybody I know is going to be there. I want to be there too. Dead as a door nail. Laid out like a six-foot sub. At a regular funeral, there's still a chance the person could wake up. Not at a cremation. A cremation's like, 'That ashtray's full. This party is over.'"