I don't know about you, but I am looking for hope in these bleak times. This photo gives me some. 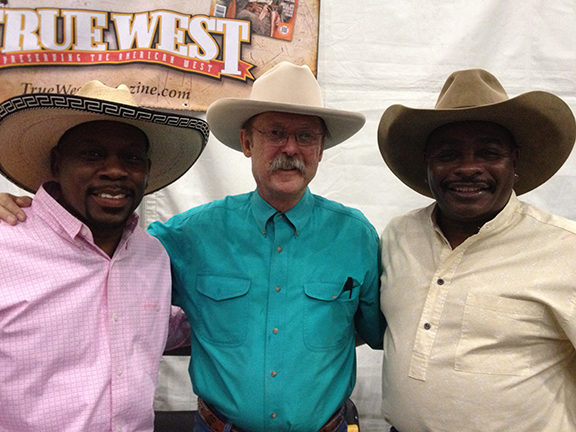 Photo taken at Festival of The West back in 2016. These two cowboys asked me to take a photo with them and I was honored. On the spot, we nicknamed ourselves, "The Brothers From Another Mother."

Another flashback journey in the Age of Covid.

On October 4, 2017 the artist and teacher, Ann King, invited me to come speak at the Mohave County Community College on Hilltop, outside Kingman, Arizona. Since I had an appearance and speaking gig at the Lone Pine Film Festival in Lone Pine, California the next day—and so did Dr. John Langallier, the historian and ex-director of the Autry Museum and Sharlot Hall—he decided to hitch a ride with me. And, so he had to endure my talk to a combined group of Kingman and Lake Havasu art students, in person and on a video link. The talk went fine and before we blasted off for Bullhead and on to Death Valley and Lone Pine, John and I decided to grab a bite. Virtually every place I knew about was closed (some for good) so we ended up in downtown Kingman at a deli I had never heard of. As we were waiting for our order, a truck pulled up outside and two people got out who I immediately recognized. When they came in, we all did a double take and we laughed and laughed and took this photograph of a very unlikely encounter in my hometown.

L to R: Dave Daiss, BBB John Langellier
and Doreen Daiss at Siren's Cafe
Dave and Doreen were our neighbors down the creek for a dozen years and he built the True West World Headquarters, in 2002, and he was a co-publisher back in the early 2000s before selling out and moving to a ranch outside Elgin, Arizona. That they would be on the road and we should land at the same deli at the same time is just off the charts crazy.
My son Tommy is a nickname machine. He gives everyone funny nicknames. For his parents, he calls us "The Gooses," as in "Mother Goose" and the "Goosensteins," when he's feeling playful.
Zany Quarantine Encounters of The First Kind
So, three nights ago, Mother Goose and I see a silhouette with a flashlight traipsing across our driveway in the dark and so I go out to intercept him. Big burly guy with a mask on, and gloves, with a box in his hands. I don't open the gate, so he pushes the box over the top and says, "Are you the Goose?" I admitted I was. And then, the kicker, "Are you over 21?" To which I said, "Yes, barely," and he handed me the box and walked off. It was a box of wine from Deena Bean (another T. Bell nickname). Funny, huh?
"Why is the word, 'mail' even in email? Is there any similarity between email and whatever the hell is going on in the Postal Service? One is a digital fiber optic, hyperspeed network and the other is this dazed and confused distant branch of the Cub Scouts, bumbling around the streets in embarrassing shorts and jackets with meaningless patches and victory medals, driving 4 miles an hour, 20 feet at a time on the wrong side of a mentally-challenged Jeep."
—Jerry Seinfeld, "Is This Anything?"
Posted by Bob Boze Bell at 9:28 AM