"Lust for Life" And Marriage Advice

Memories of old, free-wheeling trips keep bubbling up in this time of Covid. 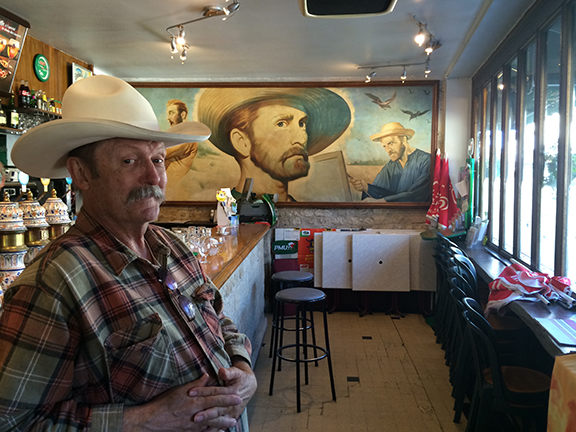 This was the last stop on the Van Gogh Art Tour in September of 2015. Kathy planned this trip, as a gift to me. We flew into Amsterdam to take in the Van Gogh Museum, then we took the train to Neunen, where Vincent spent some of his childhood, then on to Brussells, and Paris (where we met Dan and Darlene Harshberger), and we took in Montmarte and other artist haunts in the City of Lights, then we all took the train to Arles and saw the site of the Yellow House, then back to Paris, and on to the village north of Paris, Auvers sur Oise where Vincent died mysteriously (suicide or shot by a local yokel?) and the cemetery where he is buried alongside his brother Theo. This is a bar, above, in the center of the village that features a mural of Kirk Douglas, as Vincent, from the movie, "Lust for Life."

"Marriage is a beautiful thing full of fascinating moments. I actually saw this the other day. Husband in the car. Wife on the street. He's picking her up after work. And he did not bring the car to a full and complete stop for her to get in. She had the car door open. She was hopping with one foot, trying to get some kind of leverage on the armrest of the door. You can only imagine the spirited exchange of ideas that took place inside that car the rest of the drive home.

"But that's what marriage is. It's two people. That's it. Trying to stay together without saying the words, 'I hate you.'
"Which you are not allowed to say. Don't say that. You can feel it. That's okay. Just don't let it come out. Say something else. Anything. Say, 'Why is there never any scotch tape in this god damn house?'
"'Scotch' is 'I,'
"'Tape' is 'hate,'
"'House' is 'you.'
"But it's better. it's better to say, 'You know, no normal human being leaves a bathroom floor that wet.' Than, 'You're stubbing out my soul like a cigarette butt.'
"You just don't say, 'I could kill you right now.'
"You say, 'You're so funny sometimes.'"
—Jerry Seinfeld, "Is This Anything?"
Posted by Bob Boze Bell at 9:07 AM