As I mentioned yesterday, we love "1883" in our house. Kathy, especially, is in love with Elsa and the emotional resonance of the story. I can't remember the last Western we watched and enjoyed so much together. All that said, I raved about Elsa's wonderful hat, but there are some clunkers in the show. Case in point: 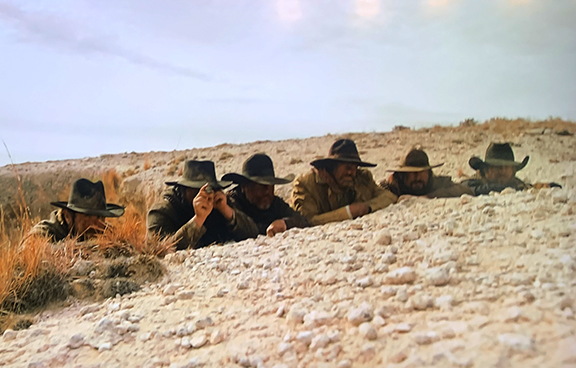 This scene of Commancheros preying on the wagon train is pretty weak. Half those hats look like they grabbed some bull riders from a PRCA event in Lubbock and put them in the shot. Way too modern for a period piece, especially the hat on the far right. Plus, to my eye, they all appear to be anglos and the beauty of the historic, actual Commancheros, is that they were mixed-race gangs. As Josiah Gregg put it, "These parties of Comancheros are usually composed of the indigent and rude classes of the frontier villages, who collect together several times a year, and launch upon the plains with a few trinkets and trumperies of all kinds, and perhaps a bag of bread or pinole." Most were from New Mexico, and they were a motley crew, consisting of Hispanics and ne'er-do-wells of mixed ethnicity which included Navajos, Comanche, Apache and Kiowa, along with a few renegade anglos.

Now THAT could have been such a cool scene. And here's how they should have looked.

This is how you spread out the headgear and mix up the gear, making it more hodgpodge, random, not uniform. And this is how I would have staged the fight.

A Ridgeline Defense during the Mexican Revolution
Look at that kid, second from left, hanging tough with his father and uncles! Yes, I know, I am asuming the lad is with kin, but dang, that is a mere boy on the front lines. May be posed, but those three on the left seem mighty serious to me. Anyway, this is how I would have staged the Commanchero scene in 1883. More Mexican and less Texas Ranch Rodeo.
"The Oscar is in the details."
—Old Hollywood Saying
Posted by Bob Boze Bell at 2:02 PM