The Restless Eyes of Crazy Horse

Thanks to some serious Crazy Horse fans and scholars (that would be you James Mills and Bradley Ross ) I have a little better description of the legendary Crazy Horse. He was known to have "light, brown hair and complexion" (counter intuitive, but okay) and he painted lightning streaks on his cheeks before battle and he had a serious scar above, or around the mouth area, when he was shot at close range by a very angry warrior who didn't appreciate Crazy Horse's amorous attentions to the angry warrior's wife.

"Crazy Horse did have fairer skin than the average Lakota and had dark brown curly hair. He was described by those who knew him, as in his fellow Lakota (including one of his best friends’s younger brother) as a slight, slender man, about 5’8 or 9” tall, with a thin face and small aquiline nose."

Also, according to a woman who met him, Susan Bordeaux Bettelyoun, Crazy Horse's eyes were "hazel." A newspaperman who encountered him in 1877 said he eyes were "restless." Okay, so a composite of all this is perhaps closer to here: 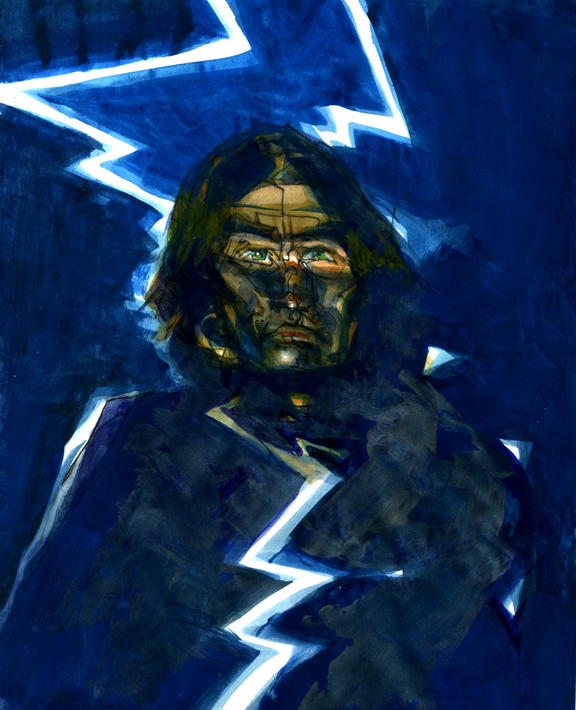 "The Restless Eyes of Crazy Horse"

Okay, so let's back this up. Eye Witnesses and kin describe Crazy Horse as having brown, curly hair, light complexion, a narrow face and nose—hazel eyes—and small in stature. Wow. If I didn't know better, I would say he was an apple: red on the outside, white on the inside. But that's history. When you expect it to go one way, it invariably goes the opposite way. And, here's the kicker: if I literally illustrated Crazy Horse to match this description he would look more like Pauly Shore than the greatest Lakota to ever walk the earth.

"History is too important to be left to historians."