I Swear. You Swear. We All Swear. But This Is Where Cowboys Don't Swear

I think it's safe to say most of us are more profane than our parents, or, certainly earlier generations. I know I swear quite freely in conversation with friends, and at work—especially at work—and for some reason, when I am talking outloud to myself. When I am on my daily walks, I talk a blue streak, usually about some dumb thing I did, or said. Some times my dog Uno looks up at me, like, "Are you alright?"

Some might see this all as liberating and make the argument that today we are freer to express ourselves without judgement or the silly rules of polite society. I half-buy that, except for when I was with my kids, 6 and 9, on a Salt River Tubing bus and some teenagers in the front of the bus were loudly cussing up a storm with the centerpiece being the F-bomb in all its ridiculous permeations. The bus driver finally told them to "pipe down," but, of course, that made them even louder and more profane. At that point I didn't see it as liberating, just coarse and inapropriate. 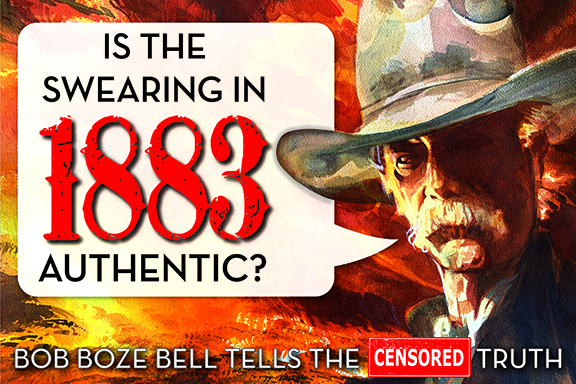 Which brings us back to the swearing in "1883." I have posted several takes on this cussing phenom down through history and in Westerns of late, and the response has been astounding, with over 180,000 views and over 700 comments. Let's see if I can distill down what I heard you say and what I believe to be true: The usage of the F-bomb in a Western is off putting because it sounds too modern and coarse for a cowboy to be using. Some linguists have postulated that the over-usage of the F-bomb as a verb, adjective and everything in between is a by-product of WWII when "The Greatest Generation" needed extra octane when it came to describing and surviving savage war conditions. If true, and I tend to buy it, then the usage of the word in a Western is not authentic to Old West times.

Here's a good rule of thumb: if you hear a cowboy use the word Ma'am in a sentence, he will not say swear words of any kind in front of women and children. He just won't. It is not condoned in his culture, past and present. And, it is not coddled and it will not be tolerated even by the roughest of the breed. Especially by the roughest. Yes, he will swear on the range with other men, perhaps even using the F-bomb, but if a woman shows up, he will clip his lip, pronto. This is true today, and, by all accounts, it was even more true back in 1883. 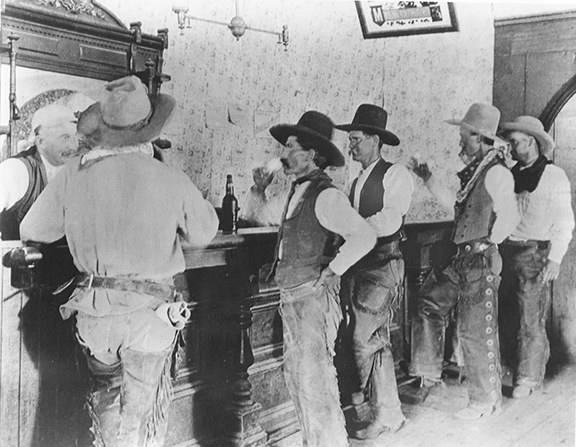 Tascosa Cowboys Belly Up to The Bar

Cowboys lined up at the bar in Tascosa, Texas. You can be sure the language was salty, but you will notice there are no women present. This was the rule back in those days. Saloons were almost without exception, male exclusive. Some progressive bars, like in Tombstone, had club rooms for women with a separate entrance. But if a woman did come in the saloon, a cowboy would often yell out, "Church!" which was a signal to clean up the language. Also, note, they are wearing their hats indoors, proving the old adage, the past is a foreign country. They do things differently there. 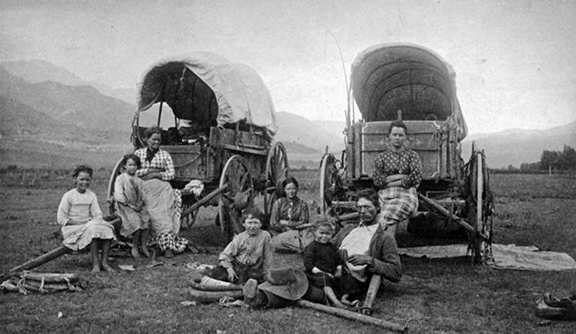 A good photograph of a wagon train family, resting after a hard day on the trail. A cowboy would never swear in front of these people. It was not condoned and if some crude person did, other cowboys would shut him up. That was the rule. Period. To the show's credit, Taylor Sheridan had a scene where the camp cook got too salty and used the F-bomb and he was redressed by an irate mother (Faith Hill). Now THAT was damn sure accurate!

"If you must curse, please use your own name."