When we think of Wyatt Earp and Bat Masterson as legends and icons most people naturally assume that at the start of the Twentieth Century, as interest grew for heroes of the Old West, a writer found the two aging lawmen, wrote down their stories and the numerous books and the glut of movies and TV shows followed right along. Well, that's about half true.

For starters, both men were about as brave as one can be without being a psychopath. One was from a working class Irish family in Canada and the other boy was from Pella, Iowa, via Illinois. Did the Irish lad William Barclay "Bat" Masterson, say "aboot" and did the Iowa farm boy, Wyatt Barry Stapp Earp, say, "I 's'pose"? Hard to say, but with the strong regional dialects being prominent in those days, it's possible.

Fast forward: by the time they were in their twenties they were working together as lawmen and we have the photograph to prove it. 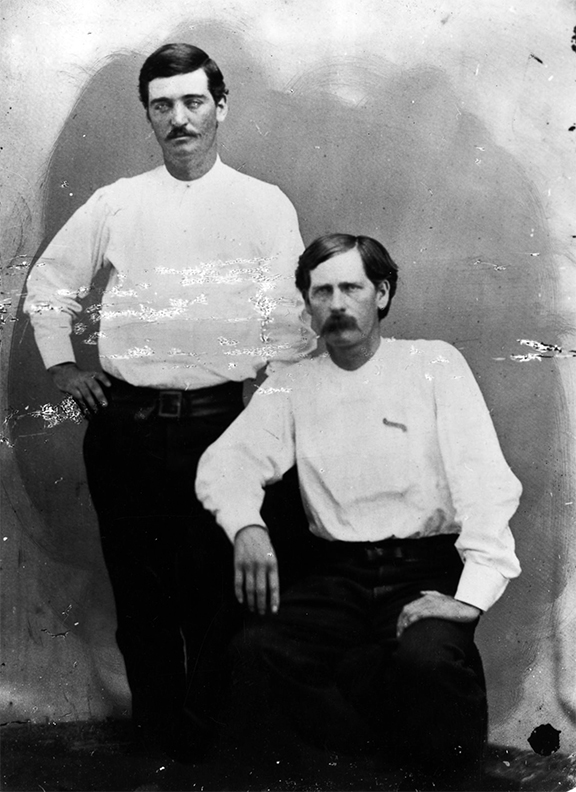 Bat is 23 in this photograph and Wyatt is 28. They made a good team and enforced the law during the wild cattle drives that crash-landed in Dodge every summer, and unleashed gangs of Texas cowboys who were ready to whoop it up and take out their youthful enthusiams and prejudices on Kansas Yankees, while the cattle were loaded on railroad cars to be taken eastward.

Note the soft, leather gunbelts which appear to be part of a uniform? The badge we can see on Wyatt is also very unique with the sliver of a shield, as opposed to a five-point star badge or flat shield prominent in most photographs of the American frontier era.

Both young lawmen were known to be adept at "buffaloing" malcontents in Dodge by using the butts of their six-shooters as a club and hitting cowboys upside the head to subdue them. One oldtimer told about being in a pool hall when Earp demanded a trouble-maker come outside. When the Texan refused, Wyatt entered the hall, waded right into the gang of cowboys assembled and "buffaloed" the miscreant, dragged him outside and arrested him. Now this took some major "sand," and if you want to know what that might be like today, simply go into a biker bar, jump up on a pool table and announce that only "wussies" ride Harleys. You'll have a pretty decent idea of what Wyatt and Bat were dealing with on a daily basis during those rowdy cattle seasons in Dodge City, Kansas.

After the 1879 season, the Earps headed west because "Dodge had lost its snap," was how Wyatt put it. After a stint in Prescott, Arizona, they gravitated to the new strike in the southeastern part of the Arizona Territory, called Tombstone. Wyatt was tired of "lawing" and was in town to make money, investing in a mine and trying his hand at various capitalist activities. He also kept his hand in dealing faro at the Oriental Saloon and soon wrote Bat to come quick because faro dealers were making up to $25 a shift, while cowboys made $30 a month!

Bat came out in in the spring of 1881, and spent some quality time in the gambling halls of the Town Too Tough to Die. It's interesting to speculate what might have been different in the altercation of October 26 of that same year with the cowboys at the O.K. Corral, if Virgil had called on Bat to assist his brothers, rather than Doc Holliday. It's tempting to think violence would have been avoided, with both Wyatt and Bat having ample experience with just that situation, but we'll never know. But before that event came down, Bat received word that his brother Jim had threats against his life back in Dodge City. So, the loyal brother left Tombstone and traveled the 1,100 miles, the last part by rail, back to Dodge and, as the train pulled into the station, he jumped off on the opposite side from the depot, and almost immediately got into a gunfight with two of the guys who were threatening his brother, wounding one of his assailants (although Al Updegraph later claimed he was hit by someone else), Bat was arrested and forced to leave town with his brother. Later, Luke Short who had bought the Long Branch, got sideways with the town fathers when he attempted to bring in female "singers" who weren't actually singers, but you know. Anyway, Short's friends, including Wyatt Earp, Bat Masterson and others returned to Dodge in 1883 to intimidate Short's adversaries, which they did, and then they posed for a famous photograph, known as the Dodge City Peace Commission. 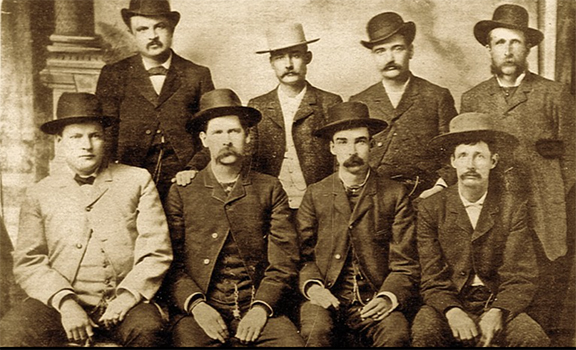 Short was able to recoup some of his losses and leave town with some grace. After this Bat gravitated to Denver, and then on to New York City. Wyatt bounced around the West from Idaho to Alaska, and all up and down the Pacific coast from San Diego, Los Angeles, to San Francisco and on to Seattle. They may have run into each other at a prize fight, or two, but for all intents and purposes they never saw each other again, and yet, even though they were basically on opposite coasts, Bat's influence started the gears rolling forward and before Masterson died in 1921 he had planted the seeds to the legend that would carry Wyatt Earp, after his own death, to the pantheon of Western icons. Wow.

"Wyatt Earp has excited by his display of great courage and nerve under trying conditions, the envy and hatred of those small-minded creatures whith which the world seems to be abundantly peopled, and whose sole delight in life seems to be in fly-specking the reputations of real men."