June 10, 2010
Been talking to some of my regional publishing friends, and, knock on wood, things are looking up around our neighborhood. Our business is up 40% over last year (June issue is traditionally our weakest performer). And the word on the street among my compadres is that money is loosening up for advertising in several categories. In print!

Went home for lunch and worked on a bank of hands reaching for the sky. Going to marry it to a flying skeleton piece I did several weeks ago: 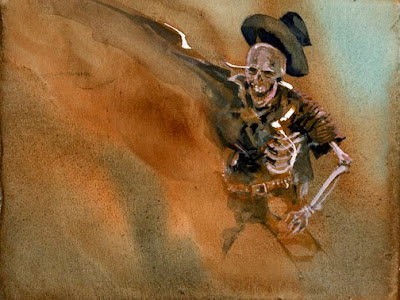 I call this "Billy The Kid Just Out of Reach," which is just how the dang Kid has been, both in life and in the grave. And here it is with the scratchboard hands married to it: 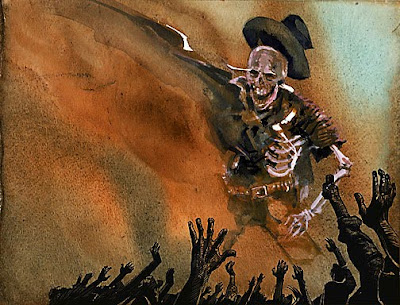 We're also working with a certain Kid buff on the Fort Sumner death angle, working from his research which shows that the Maxwell house probably did not have an outside door from Pete Maxwell's bedroom (it was accessed from a central hallway). This is totally different than my research, but then I went there in 1991 and had the late Joe Bowlin show me the Abreau house, which allegedly was exactly like the Maxwell house so I used that configuration. However, the army floor plans for the fort clearly show a central hallway and only windows on the outside. This changes the dynamic of the Kid's final movements and adds even more fuel to the fire for those who think Billy was in Paulita's bedroom, heard someone talking out on the porch (Poe and McKinney), came across the hallway in his stocking feet and asked "Quien es, Pete?"


It has never made sense to anyone I know that the Kid would be walking across the parade ground in his stocking feet. And for those of you who think he did, I have two words for you: stickers and cowpies.


No, the scandal was too great (Pete's sister Paulita was only 15!) and they had to get the Kid out of that house in order to preserve everyone's honor and dignity. It was just unseemly. And, also unrealistic. ha.


If this doesn't make any sense to you, don't worry, Gus "The Mapinator" Walker is working on a concise map even as you read this. Still, it won't be perfect and I can already hear the teeth grinding amongst my Kid friends, but then when it comes to perfection I kind of go along with ol' Wolfgang: