June 15, 2010
Spent all day working on the death of Billy the Kid. Gus Walker did a great map of the death scene in Maxwell's bedroom. We incorporated a new find, by Gregory Smith, who found the original floor plans for Fort Sumner in the National Archives. Fred Nolan provided a sweet bit of a 1942 interview with Kid Dobbs. Really puts an interesting new spin on everything.

See, this is one of those runny jello moments, as it applies to history. In 1991, I was hard at work on finishing my first book on Billy the Kid. I sent a floor plan of the Maxwell house (which was drawn, or extrapolated from the Abraeu house, since the Maxwell house was long gone) to five Kid experts and asked them, "Where was the bed? Where was the door? Where was Garrett? And where was the Kid? All five came back completely different. But, extrapolating between them I managed to create a scenario in my mind that made sense and that's the way I drew it in my subsequent 1992 Illustrated Life & Times of Billy the Kid.

With the finding of the original floor plan all my due diligence was overturned in a heartbeat. The doors are completely different and the hallway has flagstone! Really?! Flagstone? Are you kidding me? Is there also a sliding glass patio door? You can't make up anything more outrageous than the truth, can you?

An old college friend, Tim Coury, came out today and told me he was cleaning and found some stuff I might want. Here's a photo of me eating a taco in 1968, plus me and Tim and his girlfriend (later wife) Annie, on rented Hondas in 1968: 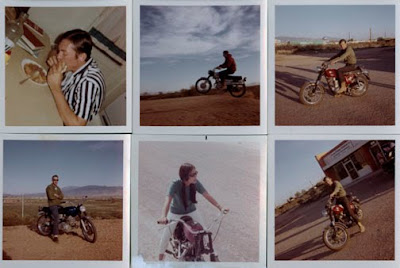 And here's a cartoon strip I created, called Dick Matric, which ran in the University of Arizona Wildcat newspaper in 1967: 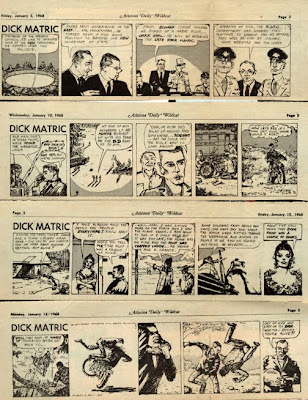 Yes, the comic featured my neighbors, Tim Coury and Hank Widenmann, so that's why Tim saved them.


Tim, for some reason, also saved a notebook of mine from a Sociology class. As you might expect, the notes start out very serious, but then, day by day, more drawings appear in the margins until, well until this: 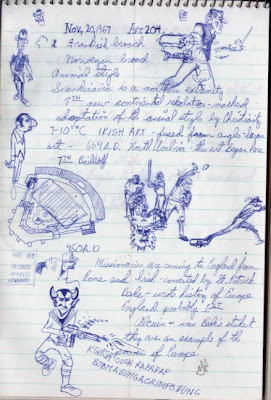 No surprise, and no degree.

"I'm going back in time. Next week I'll be playing vaudeville, and then I'm going to be a steamboat captain."
—Conan O'Brian, in his "Legally Prohibited From Being Funny On Television Tour"
Posted by Bob Boze Bell at 5:22 PM