June 21, 2010
Had a nice quiet Father's Day. Went into the Beast last night to see The Girl With The Dragon Tattoo at Harkins' Camelview 5. This is the Swedish language version with subtitles of the mega-successful trilogy (Hollywood is making an English speaking version even as you read this). Enjoyed it, very sadistic and sexually violent (those Swedes!) but it has a new kind of female lead who I can't imagine Hollywood allowing, say, Sandra Bullock, to be so morally ambiguous (same thing happened to the English version of La Femme Nikita where a French speaking stone cold killer gets watered down to "appeal" to American tastes). It was long, though and Kathy said they were quite true to the book.

Cinematic Scenarios
Worked quite a bit on a variety of cinematic scenarios, like this: 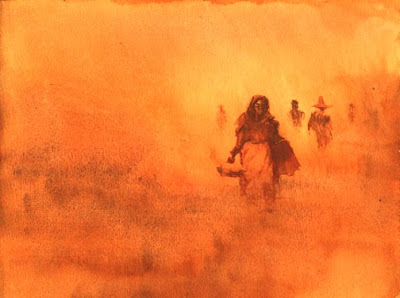 This is a sequence of Los Muertos villagers, who Mickey Free encounters, walking through the dust stirred up by red-eyed Mexican cattle on the dry lake bed beyond the road to Fronteras.


Meanwhile, here is a frame from the sequence of General Crook's massive, punative expedition into Mexico against Geronimo: 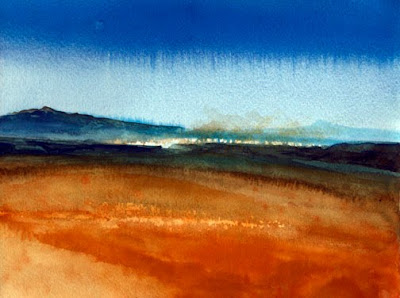 And, here's a scene from Cole Younger's troubled dream of bloody, Minnesota cornfields: 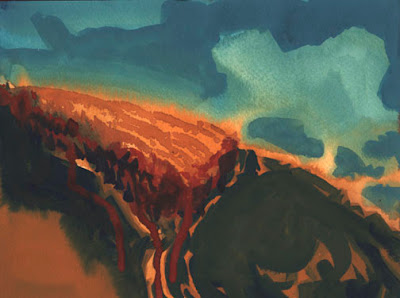 Bad news from Hollywood: the new Jonah Hex Western opened last Friday and "bombed" with "just $5.1 million." Ouch! We really wanted it to do well. The review I read said it looked good but was just a tad short on story. Gee, I wonder what ol' Elbert has to say about this?