June 25, 2010
Like October 26, July 14 and 9•11, today is one of those dates we history buffs notch and reflect on what happened out in the middle of Nowhere, Montana in 1876. A perfect storm of what-can-go-wrong-will-go-wrong. To me, the craziest part of how perfect it was, is that after Reno's charge, Crazy Horse spent an hour getting his makeup on before entering the battle, and they still won. Just bizarre and amazing. But then, the whole thing is crazy extraordinary in every detail.

Apache Endurance
Working on a new batch of True West Moments and I'm going to feature the Apache woman (I believe her name has been lost to history) who was captured by Mexican slave traders in the 1870s, sold and shipped from the mainland of Mexico to Baja, where she was purchased by a rancher in the mountains. She worked as a servant for some time, but began hoarding food and planned her escape. She left in the middle of the night, heading east to the Sea of Cortez. Once she located the water, she turned left and outran, and out-foxed the hunting parties sent out to catch her. She made it to Yuma Crossing, and waded across the most shallow part of the Colorado River (she couldn't swim), and from there joined a couple other Indian women as they traveled up the Gila River. They were attacked by another tribe and her companions killed but she made it all the way back to the White Mountains of eastern Arizona to her family. She was rescued by her brother-in-law and in Apache custom they must not look at each other face to face, but they allegedly made an exception in this case and she made it home after a extraordinary run (how many miles is it from the interior of Baja, say San Felipe, back to Fort Apache? 500 miles?). 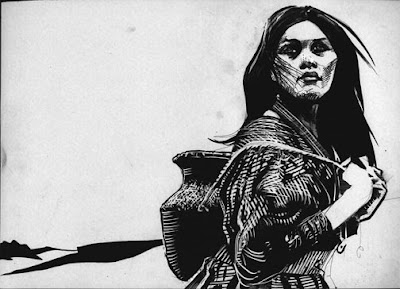 Now, here's where I need your help. Where did I get this story? Ha. Was it in Bourke? I know it's in the Geronimo library somewhere, but I can't place it. Let me know if you know where this story came from so I can substantiate the main points. Thanks.

"Move and the way will open."
—Old Vaquero Saying
Posted by Bob Boze Bell at 10:44 AM