June 11, 2010
I've always been fascinated by band names and where they came from: "The Beach Boys," "The Beatles" and "The Stones", for starters. And "Nirvana", "Pearl Jam" and "U2" for the next wave (true, I realize these bands are at least three waves ago).

Cowpies & Cockleburs
The name of a band? In today's parlance, "Not hardly, geezer dorkster." We seem to have turned a corner for band names. When I was starting out it was all cars and things: "The Novas," "The Chevelles," "The Deltones", or, straight ahead names, like "The Five of Us", and "The Ducktails." As the sixties morphed into the seventies and then burned into the eighties and nineties it got harder and harder to come up with something new or original (one of my favorite band names from the eighties was "Moose Dicks From Outer Space"). And, don't tell anyone but in the late sixties I was in a band named "Central Heating".

But, the new names I'm hearing and reading about seem to be segments of sentences, like this one: "What Laura Says." Really, what does Laura say? Oh, you say it's the name of an indie-pop Tempe sensation? Okay. And, how about "Jimmy Eat World"? Or, "Yourself and the Air", or "School of Seven Bells"? These are band names and I'm not making these up, folks. These names make Roger Clyne & The Peacemakers seem absolutely ancient by comparison. And, if these are any indication—By Comparison—will soon be a name of a band, if it isn't already.

This musing led me back to a story idea I had twenty years ago, called "The Last Baby Boomer," wherein some poor sap is still around in 2050 and all of his Beatle references, all of his Stephen Colbert references, all of his Jerek Deter references are lost on a clueless populace. Now, that would be lonely, and, someone, perhaps reading this, is going to be that person.

Given our penchant for attention, I do imagine there will be some cheering when the last Boomer croaks. Ha.

When the crew from the Outdoor Channel was taping in my studio, the producer picked up a stagecoach piece in my unfinished pile and started raving about it. Here it is: 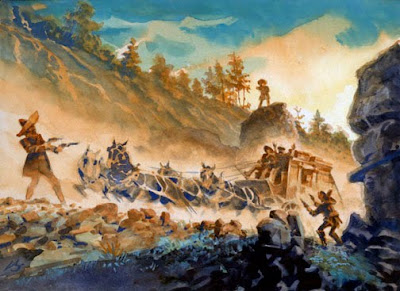 This is a set piece for an unfinished opening sequence in El Kid, my proposed story about Billy the Kid after he left Lincoln and before his capture at Stinking Springs. No one has done much from this period. I have very good photo reference utilizing master vaquero Lee Anderson and Bill Glenn as models. May reattack this concept. Here's another frame from the sequence: 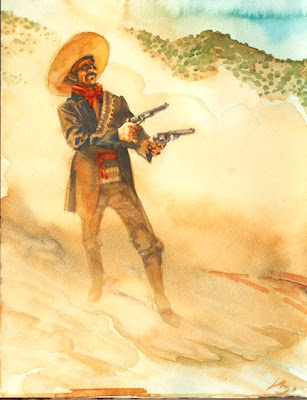 "Manos Arriba!" Which I believe means "Hands Up!" in Spanish. Manos Arriba would be a good band name.


First I need to finish the big, ambitious Digging Up Billy the Kid painting. Spent about an hour on it this morning before I came into work. Hope to finish it this weekend.

One of my biggest stoppers is I want both to be perfect. Gee, I wonder what ol' Olivier has to say about this?

"Striving for perfection is the greatest stopper there is. You'll be afraid you can't achieve it. . .it's your excuse to yourself for not doing anything. Instead, strive for excellence, doing your best."
—Laurence Olivier
Posted by Bob Boze Bell at 10:17 AM