June 16, 2010
I've been inundated with visitors the last couple of days. This morning Alan Tapija and Tom Acuna came in, and later, in comes Mike Roberts from Pittsburg. He was a suite mate from Cochise Hall at the U of A in 1965. Mike was a football player and got kicked off the team for throwing a smokebomb in Apache Dorm. They transferred him to Cochise. I took him to Kingman on Spring Break and he almost got into a fight at the local pool hall when he sunk the nine ball twice, on the break. The local hustlers thought he was a cheat. Ha.

One Door Closes, Another Door Opens
In 1991 I traveled on a research trip to Fort Sumner to meet Joe Bowlin who owned Bowlin’s Trading Post at Taiban, not far from Stinking Springs. Joe also owned the Billy the Kid Museum and was president of the Billy the Kid Outlaw Gang at the time and along with his wife Maryln, a tireless proponent of all things Billy the Kid. We spent the day seeing all the sites, from Stinking Springs, the Brazil-Wilcox ranch, the Yerby ranch, Sunnyside (really disappointing!). One of my goals for my illustrated book (published in 1992) was to accurately illustrate the events leading up to the Kid’s death. Of course, Old Fort Sumner itself was long gone, but Joe took me to the Abreu house nearby which local folklore said was built to the same specs as the Maxwell house at the fort. I took a series of photos for art reference and had Joe pose in the doorway of the corner room. I was struck by several things: that was a very small room (20’ X 20’ according to the army floorplan) and it made sense to me that there would be outside doors to all the rooms along the porch. As is often the case when I visit the actual sites where history has happened, it starts to make sense. This was the case at the Abreu house, and I built my narration from this building. Here is a photo of Joe sitting on the porch of the Abreu house: 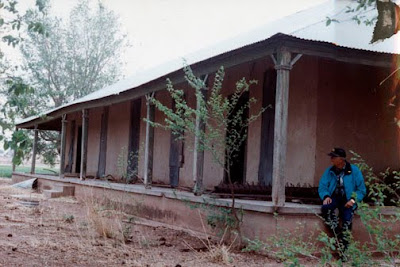 And here's Joe standing in the doorway of that tiny room: 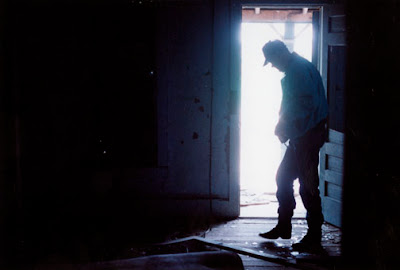 Unfortunately, conventional wisdom is often misinformed, and that is what happened when Gregory Smith discovered the original floorplans for the fort buildings in the National Archives. Apparently there were no doors along the porch, all windows. Now, it is possible that the Maxwells created doorways along the outside wall, but if there wasn’t an outside door to Pete’s room it certainly forces us to look at the event with new eyes. Joe Bowlin passed away in 1993 and Maryln in 2008.

Speaking of Billy the Kid, in the early nineties when I was drawing my first scenes for the book, I put the arm on several neighbors to re-enact the killing of the Kid. One of my neighbors was perfect for Pat Garrett. Three time Olympic Gold swimmer Charlie Hickox was six foot four and he agreed to come down and "play cowboy." Charlie was also a ferocious basketball player and I hated guarding him in pickup games at the Cave Creek school.

I tapped my neighbor across the street, Ed Donaldson, to play Pete Maxwell, and I went outside the neighborhood to get Gary S. (who is 5 feet 7) to portray the Kid. Here we are, in my bedroom, recreating the scene of the Kid approaching Pete's bed: 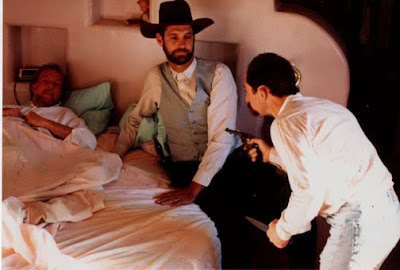 In the dark he can't see Garrett. (this is Garrett's version and, as Steve Sederwall points out, "Wait a minute, Garrett can see the Kid has a knife in the dark, but the Kid can't see a six foot sheriff?"). Anyway, I don't think Pete Maxwell had an alarm clock radio behind his head, but then I don't think he had an Alamo style headboard either (I tease Kathy that it's the Last Stand Bedstead).

"We seldom stop to think how many people's lives are entwined with our own. It is a form of selfishness to imagine that every individual can operate on his own or can pull out of the general stream and not be missed."
—Ivy Baker Priest
Posted by Bob Boze Bell at 11:47 AM