June 17, 2010
Big Billy issue going to the printer today. Lots of reaction from all my Billy pards, like this one:

BBB: As you can imagine, I'm hopelessly addicted to your blog and have been reading with great interest your door/no door theories. Garrett writes that the door to Pete's room was about 20 feet from the end of the porch. Poe writes that the Kid stepped from the porch into "the doorway of Maxwell's room," not into a hallway. There is a circa 1882 photograph of the Maxwell residence (illustrated in your fine book) that shows a door where it should be. And then there is the large Charles Foor map drawn in 1927 that depicts Fort Sumner as it appeared when Foor arrived there in October of 1881. Foor was Fort Sumner's local historian of sorts for many years, and he knew Garrett. On this map, Foor drew the route Billy took that fateful night of July 14, 1881, and he has the Kid walking around the perimeter of the parade ground and into that very same door to Maxwell's room.

As far as the military floor plans, I have not seen them, but if there was indeed no doorway when the structure was first built, the Maxwells had many years in which to convert a large, deeply recessed window into a door. Mike Pitel, who created the Fort Sumner historic brochure for the New Mexico Tourism Department, and who has spent a good deal of time researching all things Billy, pointed out to me that Maxwell had made $10,000 in improvements to Fort Sumner by 1872, which was reported in the Willison Survey of that year (see attached).

Now, regarding the stickers and cowpies problem, I'll go back to the Foor map. Foor does not have Billy walking diagonally across the parade ground; he has him walking around the perimeter, where it was undoubtedly hard packed from numerous wagon and buggy tires, the iron shoes of horses and mules, and the harsh New Mexico sun. And as it was a bright, moonlit night, I think a pile of horse dung would be pretty easy to spot (maybe that's why Billy didn't see Poe and McKinney initially, he was watching where he was stepping!). I also think there's a bit of a "sissy factor" when we look back at that time. As pampered 21st-century Americans, we find it hard to believe that someone would walk out on the dirt in their stocking feet. But Billy had spent many a night camping out on the trail. I seriously doubt that he and his associates would refrain from removing their boots for fear of encountering a pesky sticker.

I'll add in closing that there are many things in our world that don't make sense, so it should come as no surprise that sometimes history doesn't make sense -- but that doesn't mean it didn't happen. Remember, John Poe had such trouble making sense of the events of that night that he eventually threw up his hands and proclaimed that Billy's death had been foreordained. Of course, the strange, illogical, and hair-raising aspects of Billy's death are what make that night so fascinating, and why we'll be discussing it for a long time to come.
—Mark Gardner, author of the new Billy book: "To Hell On A Fast Horse"

And speaking of Lucien Maxwell and his buying Fort Sumner, got this from Steve Sederwall, which is the public auction poster advertising the sale of the buildings. Lucien Maxwell reportedly paid $5,000 for the layout: 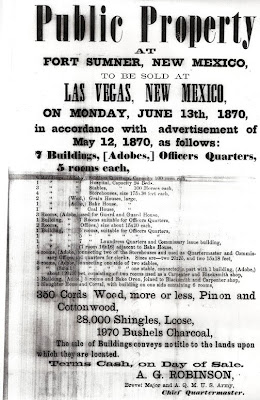 Steve wants to make sure I credit Dave Turk for finding this gem. I don't believe it's ever been seen. I love this kind of stuff. The arguments, the new finds (it's amazing!).
Posted by Bob Boze Bell at 1:19 PM