June 14, 2010
Worked all weekend on the big Digging Up Billy the Kid painting, although I did take off yesterday afternoon and, along with Kathy and Deena, went to a movie down at Harkins', Scottsdale Road and the 101 (Get Him to The Greek, so-so, 7). Afterwards we had dinner at Gordon Beirsch (sp?). Nice talking to the girls.

Got up at 5:30 this morning and got out to the studio at six. Really wailed on the painting. Here it is before I started: 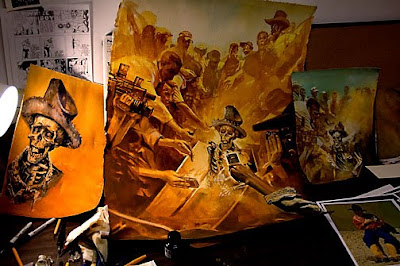 Added eight more figures: Steve Sederwall, Ms. Cooper, Paul Andrew Hutton, Bill Richardson, Drew Gomber, Fred Nolan and a couple more I can't ID for obvious reasons. Finished at nine, drove it to the office where Robert Ray shot it, scanned it, tweaked it and dropped-shipped it to our art director Dan The Man Harshberger. Issue goes to the printer on Thursday. Can't wait to see what Dan does with it.


Speaking of Kingman childhood friends, got a request from a center fielder with a great arm, Roland Serrano, who wants to see one of the new True West Moments. Here is upcoming schedule:

Times are approximate and are Eastern/Pacific zones

"The man who makes no mistakes lacks boldness and the spirit of adventure. He never tries anything new. He is a brake on the wheels of progress."
—M. W. Larmour
Posted by Bob Boze Bell at 11:03 AM