A Jackass At Midnite

March 17, 2017
Here's where we are on the jackass front. Originally, for our May issue, I had the bright idea to lean on the word—Jackass!—with a vengeance. After all, we were covering mules and donkeys in the Old West and the word is completely legit in this context.

We had Deb Kidwell's byline on the cover as "The Jackass Lady" (full disclosure: Deb herself prefers this moniker) and I had my editorial titled, "Jackass Nation." Plus, the original title of the feature was "The History of Mules And The Jackasses Who Love Them."

About a week ago, my partner, Ken Amorosano, took me aside and said, "I know you are enamored with the word 'jackass' but the folks in Bishop, California have named you the grand marshal of this year's parade and I'm not so sure they are going to appreciate this?'"

I thought about it for a moment, and then said, "Good point, jackass!"

Seriously, Ken suggested I run this by them. So I sent a query to some of the fine people in Bishop who will be hosting me over the Memorial Day weekend and more than a few saw the humor in what I was trying to do, but this is the response that impacted me: "I do not think the word jackass on the front cover of your prestigious publication will be well received by the population of subscribers of whom the majority are most likely uneducated about the mule and donkey."

Point taken, Tammy. I mean, whoever wrote that. So, here's what I feel like right now: 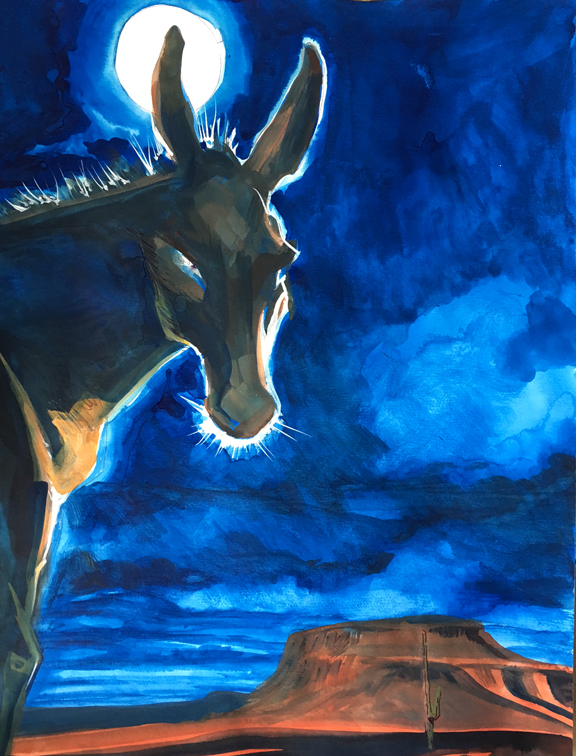 Daily Whip Out: "A Jackass At Midnite"

“Young feller, you will never appreciate the potentialities of the English language until you have heard a Southern mule driver search the soul of a mule.”
—Oliver Wendell Holmes, Jr.
Posted by Bob Boze Bell at 11:21 AM