The Oatmans Crossed A Lava Infested Landscape Straight Into Hell

March 20, 2017
Here's a report on my first day of a research trip out to the Oatman massacre site. One of the reasons the Great Western and the Oatman family wanted to make it to Yuma Crossing is because of the new fort placed there to protect settlers: 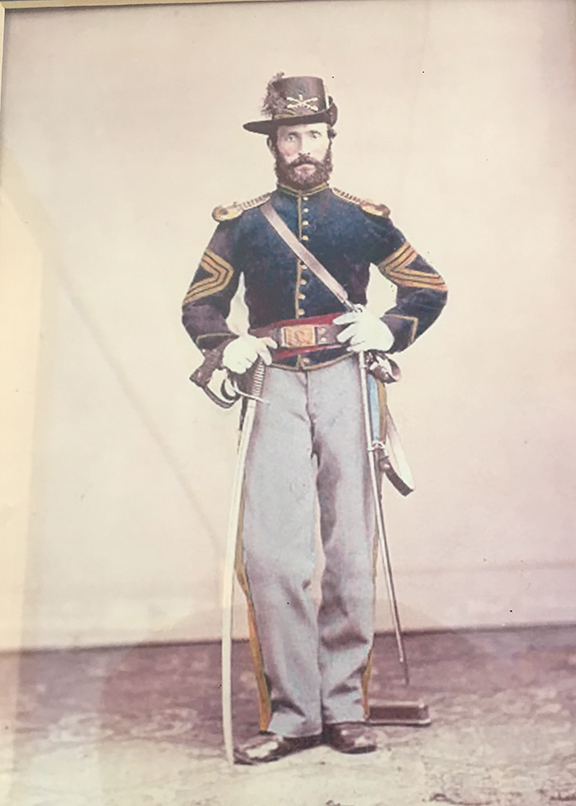 
Kathy and I drove out to the massacre site yesterday—two and a half hours—and it finally makes sense to me. Those weird bluffs in all the drawings of the Oatman family massacre seemed so odd to me, but now I get it. They all must have thought they were entering hell.

The Oatmans were members of a Mormon sect that broke off from the Brigham Young faction after Joseph Smith's murder. Their leader, "The Boy Prophet" told of an Eden-type place at the confluence of the Gila and Colorado Rivers. Cantankerous and argumentative in their zeal, the group broke up and splintered on their Westward journey with some members dropping off near Socorro, New Mexico and others dropping off elsewhere. By the time the Oatman wagon train reached Maricopa Wells, southeast of present day Phoenix, there were only three families left. Two of those decided to stay in the In-din village (one of the wives was about to give birth). Royce Oatman decided to push on even though his own wife was 9 months pregnant. Plunging westward into rough country, ringed by blackened bluffs and lava scarred ridges, they must have thought they had entered the gates of hell, and in a fevered, strange way, they were. 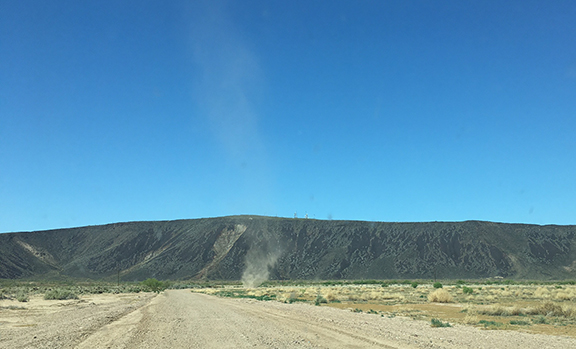 A dust devil with lava flows covering the entire mountain
to the north of the Oatman massacre site.

Today the mighty Gila River is dry, but in 1851, the Oatmans had to cross the surging river at this point, below, and, in fact, could not make it across and had to spend the night on an island in the middle of the channel. 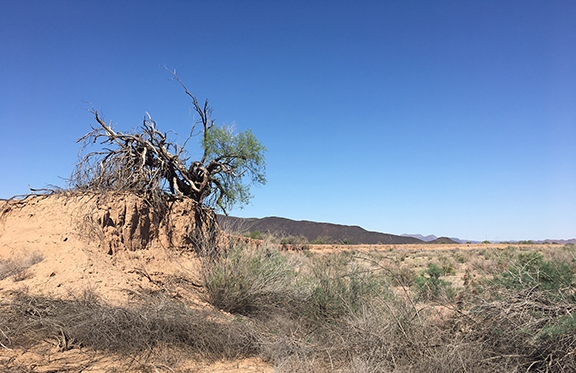 A dead tree on the banks of the dry Gila River where the Oatmans probably crossed.

I intend on illustrating my version of the incident, that's why I was interested in seeing this local version done by someone in the Gila Bend area: 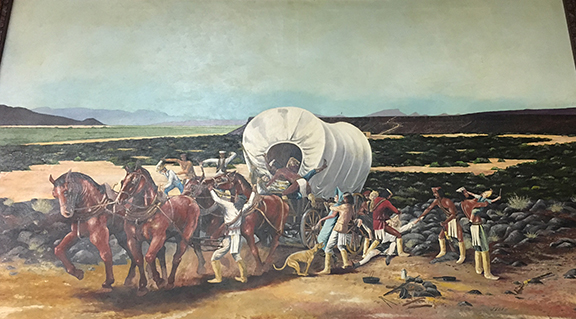 A painting in the Gila Bend museum of the Oatman Massacre

The artist got the lava beds right. The Oatman wagon was actually pulled by oxen and they were on top of the lava laden bluffs when Royce and his son Lorenzo saw two In-dins walking towards them on the road. They spoke in Spanish and professed friendship. Perhaps, "Hola, amigos. Como estas?" It gives a weirdness to the event. We have been conditioned by movies to think of an attack as coming in a rush of aggression, usually on horseback, accompanied by a rain of arrows. Here we have some dudes walking up the road feigning innocence. 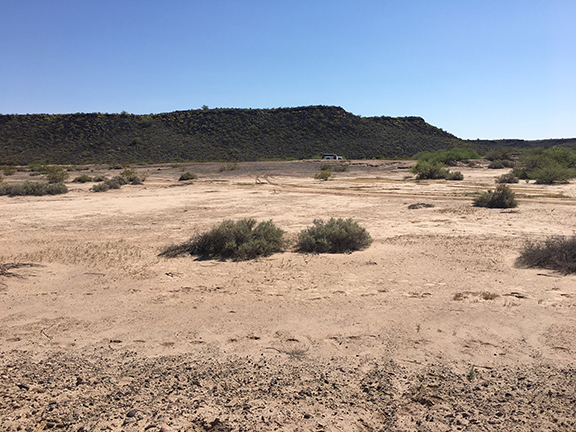 As near as I can tell, this is the long bluff of lava rock that the Oatmans
were traversing when things went south.

Frankly, even though I was in phone contact with Vince Murray, someone who has been to the site, we couldn't find the monument or the graves, even though our GPS said "you have arrived at your destination." 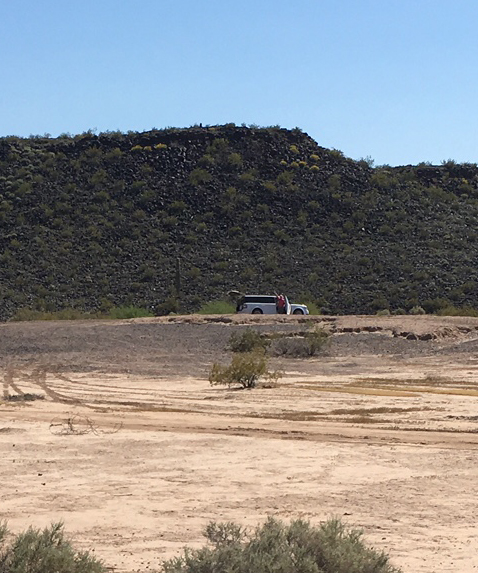 A blow-up of the previous panorama, showing our car and Kathy waving.

Royce Oatman wrote a letter to the commander at Fort Yuma to help him on February 15, 1851, "at camp on the Hela (sic)  River." This was three days before the attack.

Ultimately Major Heintzeiman did not send anyone out because the Oatmans were massacred on the south side of the Gila River, which, at that time, was in Mexico.

I always thought that after the murders, the group of In-dins headed east and north from the Gila (everyone assumed it was Tonto Apaches), but new research indicates they went back west, retracing their route, some say all the way to Agua Caliente, which is quite a hike. We drove it and out in the middle of nowhere we saw a street sign, for "555th Ave." which is apparently the Phoenix numbering system of Avenues which run westward from Central Ave. My mother-in-law, Betty Radina, lives off of 51st ave, which is some 15 miles from Central. Crazy to see that sign out there in the middle of nowhere. But not half as crazy as it must have been for two little girls.

"We were started and kept upon a rapid pace for several hours. One of the Indians takes the lead, Mary Ann and myself follow, bareheaded and shoeless, the Indians having taken off our shoes and head covering."
—Olive Oatman describing her first hours after she and her sister were kidnapped