Gates of Hell Give Way to The Eden The Oatmans Sought

March 23, 2017
After visiting the site of the Oatman massacre on Sunday we drove on to Yuma, which was the Oatman family's Edenesque goal. Although Royce Oatman didn't live to see the place he dreamed of, several families, also followers of the Boy Prophet Brewster (called Brewsterites), arrived at the rugged river crossing and were deeply disappointed as the country seemed not only unhospitable but worthless in terms of farming.

The irony is that sixty years after their tragically failed mission, the area actually became the agricultural Eden they sought when the reverse syphon project (an underground tunnel diverting Colorado River water into a vast irrigation system) championed by Teddy Roosevelt turned the harsh landscape into a virtual breadbasket of the country (reportedly, 90% of wintertime vegetables sold in the U.S. come from here). Here is a photo from the Quartermaster Museum of a steam powered jackhammer facilitating that desert miracle. 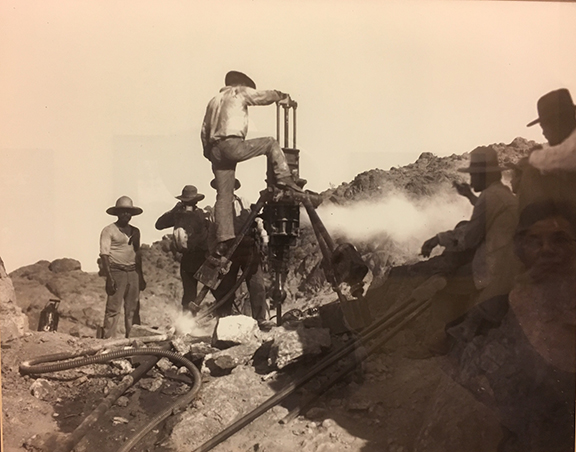 A steam powered jackhammer facilitates the reverse-syphon system of irrigation in Yuma.

"Everything comes to the person who is patient."
—Old Vaquero Saying