March 2, 2018
Working on some nocturnes for the graphic novel.

After five years as a captive, Olive Oatman had settled into life among the Mojaves and, by some accounts had started a family. All that was yanked away from her when a Qeuchan (Yuma) tribesman, named Francisco, showed up and threatened the Mojaves with annihilation if they didn't give her up. After initially turning down the offer the Mojaves finally, and reluctantly, agreed to let her go.

Stunned by the turn of events, Olive walked down by the river, all her bridges burning behind her. 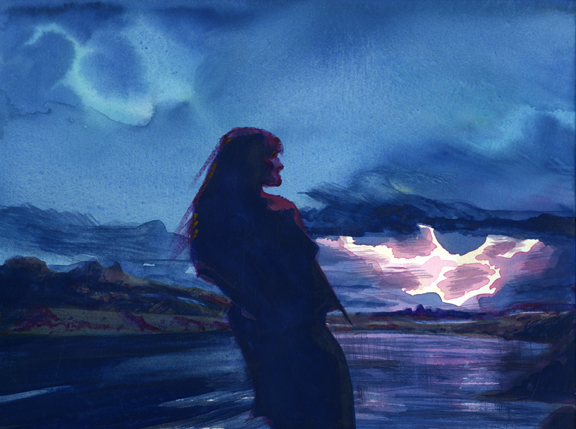 Daily Whip Out: "Olive Down By The River"

When she left the Mojave Valley, she and her escorts made her way to Fort Yuma 250 miles away (by her account she had to swim through 10 different times through the narrows of the Colorado). Once "liberated" she found herself thrust into a crazy celebrity that bordered on freak status, and her appearances took on an almost carnival, freak show vibe. As her fame grew from the best-selling book and the appearances, her celebrity in Arizona and along the Colorado grew and grew. Here is map of Arizona from 1866 showing the areas where her family traveled and where she was taken captive, by the Yavapais and then traded to the Mojaves (upper left): 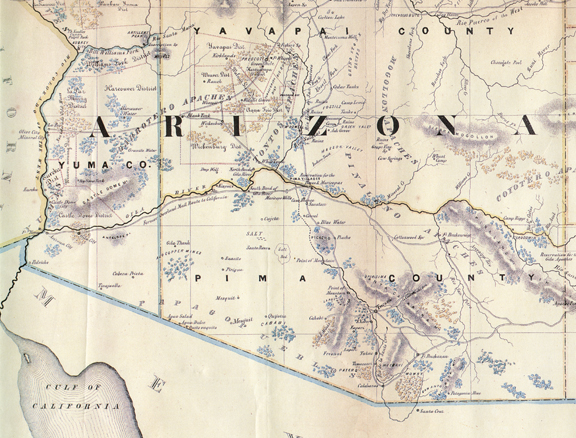 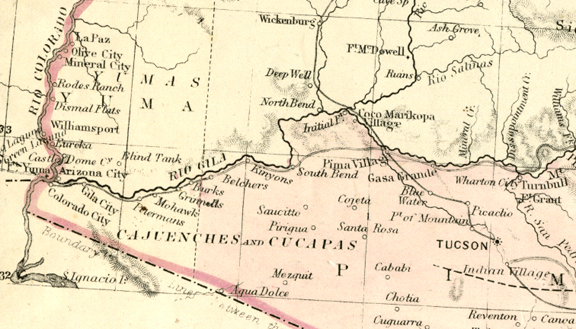 Note, that across from Fort Yuma is "Colorado City" which is the original name of Yuma, and that "Arizona City" is on the north side of the confluence of the Gila River and the Colorado River. Going up stream, we see "Dismal Flats" and just below La Paz, we see "Olive City." I was immediately intrigued by this and contacted Brian McGinty to see if this site was named for our girl. In addition to confirming that it was named for Olive Oatman, here is his reply:

"In my research binders, I see I have a fair amount of information about Olive City.  When I visited the Arizona Historical Foundation in Tempe years ago (in the Hayden Library), I found 'Notes of a Trip to the New El Dorado,' Letter No. V, dated at La Paz, Arizona, September 20, 1863, that says that Olive City was situated on the mesa at the foot of Weaver Pass, just above the ferry and near a steamboat landing, etc. At the same location, I found part of Item 70, Hayes Scraps, describing the town of Olivia, about five miles below La Paz on the west bank of the river.  I  saw another map showing it below La Paz, but one and a half miles above Ehrenberg.  There is a book by Byrd Howell Granger titled 'Arizona’s Names, X Marks the Place,' published by the Falconer Publishing Company in Tucson in 1983 with a foreword by Barry Goldwater, that has on p. 448 a little article about Olive City and another smaller article about Olivia.  I remember now I did a lot of research thinking someday I might work on this again, but it is really too much to go into here."
—Brian McGinty, author of "The Oatman Massacre"