The Tucson Festival of Books Lovefest And Rockout

March 12, 2018
We had a wild weekend down in the Old Pueblo. Woke up Saturday morning in our hotel and looked out at this fine sight:

The Mighty Catalinas at daybreak

I had a book session with authors Rod Miller (below, center) and Alan Day (Sandra Day's brother), moderated by John Langellier, and we told some tall windies and then went out to the University of Arizona Book Tent and sold a slew of books. Went and visited Greg Carroll and Sarah at their digs which they found on AirBnB: they found a place called The Tin House at 7th Street and Tyndall. 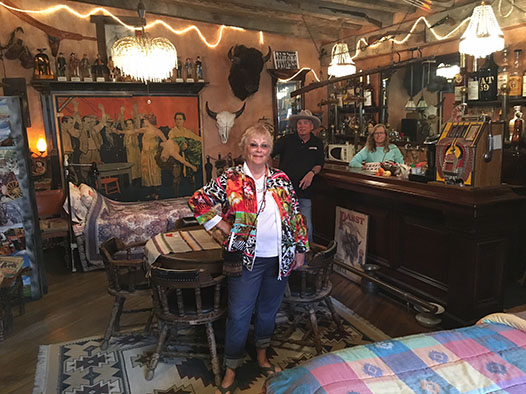 Pat Afseth, The Queen of The Tin House
(that's Greg and Sarah at the bar)

Quite a fantastic hodge-podge of Old West artifacts memorabilia, like this old sign, below, for the Round-up Bar on Benson Highway. I have a connection to the sign because I actually played the Round-up when I was moonlighting in a Country-Western band back in the day. 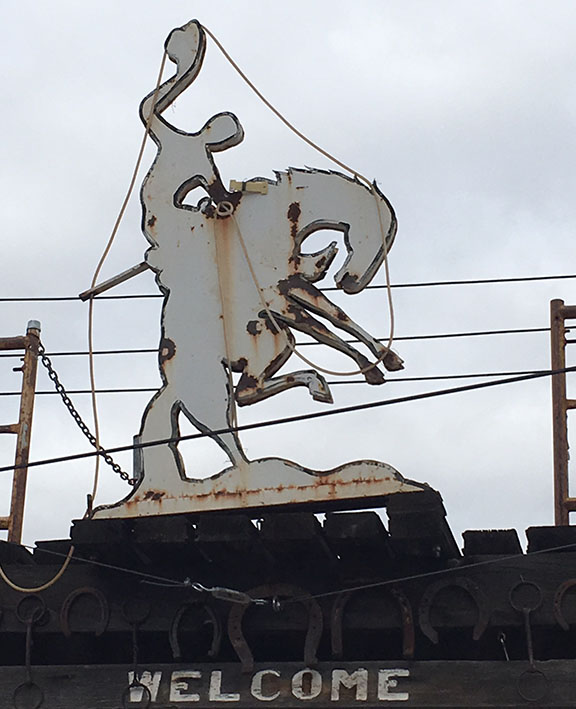 The Tucson Festival of Books gets about 150,000 people and there are hundreds of booksellers in tents, like the ones you see in the background of the photo, below. Sometimes it's hard to find your favorite author. 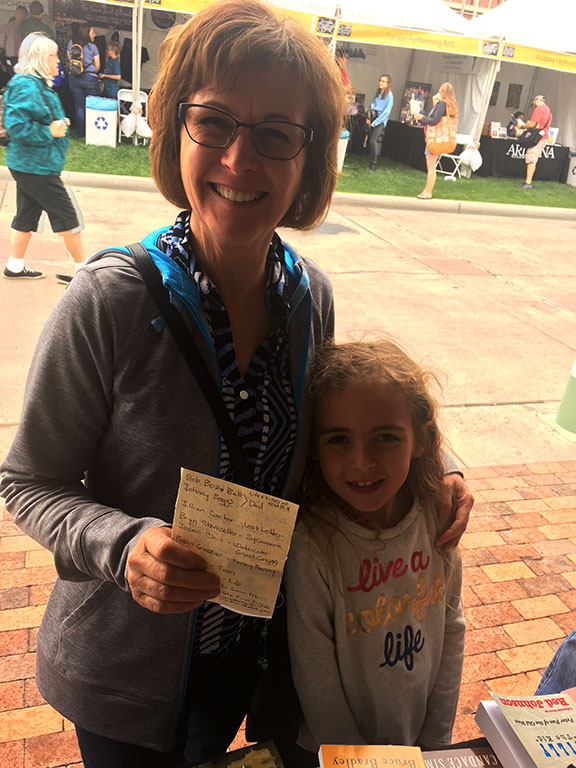 Debbie Mecom and her daughter, Amaya, 8.
Note the names on card.

This young lady, Debbie Mecom, walked up to our tent at about two yesterday and held up a hand written card and read off of it: "Can anyone tell me where I can find the tent that Bob Boze Bell and Johnny Boggs are in?" Johnny and I laughed out loud because we were chatting behind the table as she walked up. Turns out her father asked her to find us and buy our books for him, and she did.

At five, Kathy and I walked down to the free concert, featuring The Rock Bottom Remainders, a legendary (and literary) rock band put together by humorist Dave Barry—and his brother Sam Barry—featuring well known authors like Stephen King (who was not present for this gig) and Amy Tan, among other best selling wordsmiths. I have heard about this band for years and often thought I could be their drummer if I ever had a best-selling book. I wasn't expecting much but I have to tell you, they rocked the house (I think they had a ringer drummer, who was very good). They closed with "Wild Thing" and the encore was "Gloria," so they hit me right where I live. Kathy and I danced and grooved to the beat and had more fun than most of the retirees who were in the audience. Best free show I have ever seen and I saw the Beach Boys at a Get-Out-The-Vote free show at Phoenix Muni in 1971. 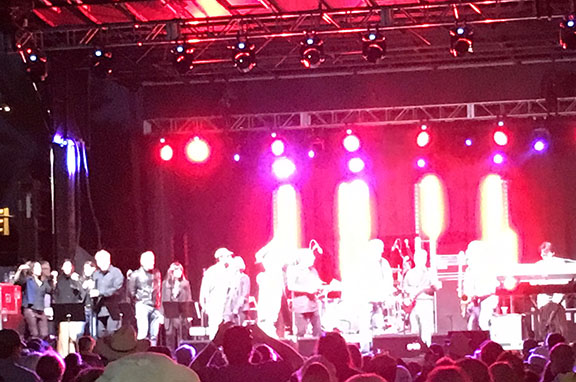 The Rock Bottom Remainders Kick Out The Jams

The funniest guy at the festival was the writer Alan Zweibel (on stage, above, first guy from left) who has a new book out, co-written with Dave Barry, called "For This We Left Egypt?" He revealed what Larry David is really like ("very likeable and generous and not the loud cartoon he plays on 'Curb.'") and Alan also told the joke that got him hired by Lorne Michaels for "Saturday Night Live": "The U.S. Post Office has issued a commemorative stamp to honor prostitution. It's 10 cents, or 25 cents if you lick it." Alan started out writing jokes for comedians like Rodney Dangerfield and he got $7 IF the joke got a laugh. This one got a laugh:

"My mother didn't breast feed me. She said she just wanted to be my friend."
—Alan Zweibel