March 16, 2018
Drove up the hill to Prescott yesterday for a speech at the Phippen Museum on Olive Oatman. Big, ragged clouds all the way. Shot this right out the front window: 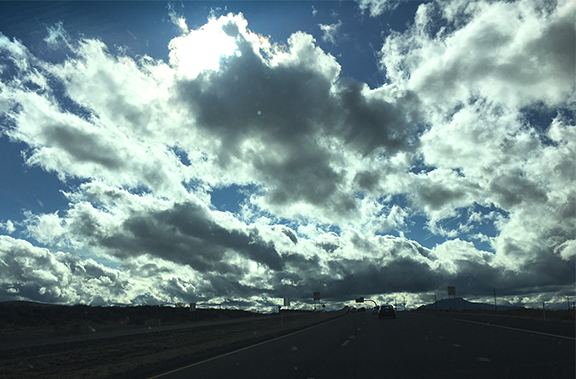 If you have been wondering where Harvey Weinstein has been hiding out, wonder no more. He did time at the Meadows in Wickenburg and he allegedly has a place in Scottsdale and has been seen out on the town, sometimes wearing a wig, a black T-shirt and a fedora. According to an article in the New York Times, someone punched him in the face at the Sanctuary, an upscale restaurant in Paradise Valley.

I have another speech in Prescott today, then I'm heading over to Payson for Don Dedera's birthday party. I believe he's 89. I grew up reading his columns in the Arizona Republic where he was the driving force behind pardons for the Power brothers. We are doing a feature on that tragic shootout in an upcoming issue of True West. When Don was editor for Arizona Highways he gave me my first illustration assignment, thus the quote, below.

"We love print. I’m a huge believer in it. We’ve lived with devices long enough to understand their enormous advantages and disadvantages. If you’ve spent 90 minutes scrolling on your phone, you don’t necessarily feel more informed. You may feel listless and restless. We’re moving into a post-digital euphoria. We’ve seen e-books have plateaued, and real books have had an enormous rebirth. A magazine is restorative. You need to be able to unplug. You absorb information differently when you read it on the page."
—Joanna Coles, chief content officer at Hearst Magazines

"I invented you."
—Don Dedera, in his invite to me for his birthday party