Shooting at Ghosts In The Tunnel Saloon

August 29, 2018
Working on a classic gunfight that took place in Florence, Arizona. The trick on these, in terms of getting it right, is to find the best scholar who has studied and written about it, and in this case that expert is my friend, John Boessenecker, who has no peer when it comes to any lawman or outlaw who ever took a step in the state of California.

From the Journal of Arizona History, Spring of 2012, John Boessenecker's "Pete Gabriel: Gunfighting Lawman of the Southwestern Frontier," here are my notes from John's excellent reporting:

John Peter Gabriel was born on November 17, 1838, in Kruft, Germany, the fourth of six children.  When Pete was nine, his parents emigrated to the United States, settling with their brood in Grant County, Wisconsin. Two years later, in July 1850, Pete's father died at the age of sixty-two. Anna Gabriel could not support her family. So the 12-year-old boy was taken in by a prominent lawyer, who soon joined the California gold rush.
There, 16 miles north of Marysville in the Yuba River region he grew up among the rough gold miners and gamblers. In his early twenties he became by turns, a gold miner, a mule skinner and a guide.


"I was compelled to make a reconnaissance for the location of the road with one companion, a mountaineer named Peter Gabriel to whom I am much indebted for his self reliance, determined energy, and courage."
—Colonel Frederick W. Lander, in his official report, praising the young Gabriel while routing a wagon road that became known as Lander Cut-Off

Within a short time, Pete Gabriel was known wide and far for his bravery and he soon enough gravitated to being a lawman. Several times he was elected sheriff (once the vote was tied and the two candidates rolled dice to determine who would serve and Gabriel lost, taking it all with grace and humor).  The only knock against him is that he suffered from severe mood swings which were exacerbated by drinking, which he tended to do a lot of (he had two ex-wives who would agree). 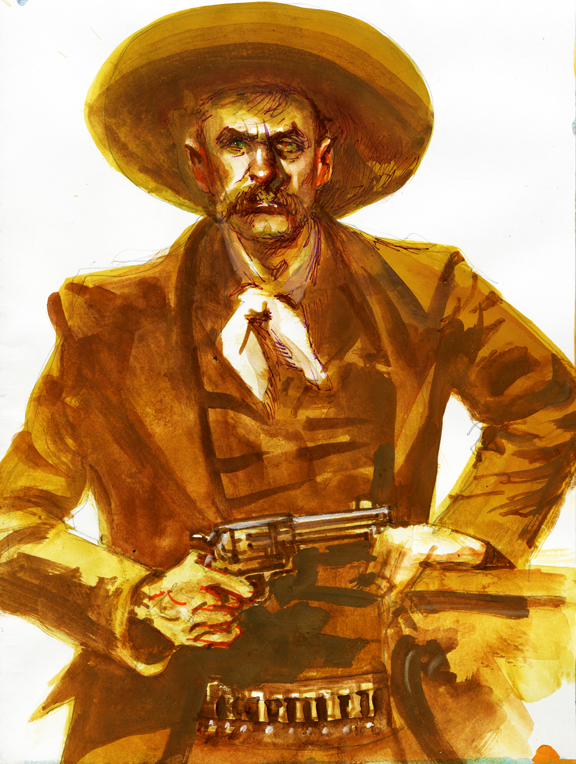 "Pete Gabriel Is A Moody Drunk"


In November 1884, Pete Gabriel was elected by a 130-vote majority to his third and last two-year term as Pinal County sheriff in Arizona. He appointed thirty-nine-year-old Josephus Phy as his deputy. A miner and freighter, Joe Phy was born in Platte County, Missouri, on May 22, 1844. At age fifteen he ran away from home, eventually landing in Arizona, where he was taken in by attorney Granville Oury and his wife. Phy had been an unsuccessful candidate for Phoenix sheriff
in 1872, and later served at times as a Maricopa County deputy sheriff. In 1878, he was appointed a deputy U.S. marshal. Phy neither drank or smoked, but he had one trait he shared with Gabriel: he too had a bad temper.

In 1886 Gabriel was going to retire from lawing and he threw his support behind his deputy, but then Phy pistol-whipped a teamster in Casa Grande who had allegedly misquoted him and Gabriel had to arrest his deputy and then fire him. That is when the bad blood started between the two former friends.


By the spring of 1888, Gabriel was working his Monitor Mine at the head of Mineral Creek in the Dripping Springs Mountains northeast of Florence. Four miles distant, he erected a stamp mill for crushing ore.


On the morning of May 31, 1888, Pete Gabriel, accompanied by his friend Mike Rice, left his mine near Riverside in a buggy, headed for
Florence. Rice recalled , "As was usual with Gabriel on such trips he had a quart of devil water along and imbibed freely of its contents. When we arrived in Florence Gabriel was practically all in."

When they arrived in Florence, Gabriel retired to the Tunnel Saloon, where he continued drinking and soon enough he heard that Phy was gunning for him. Sure enough, at eight p.m. Phy showed himself in the doorway of the saloon and the ball opened. Eleven shots were fired. Both men were hit multiple times and Gabriel took a point-blank shot to his chest. He never lost his feet. 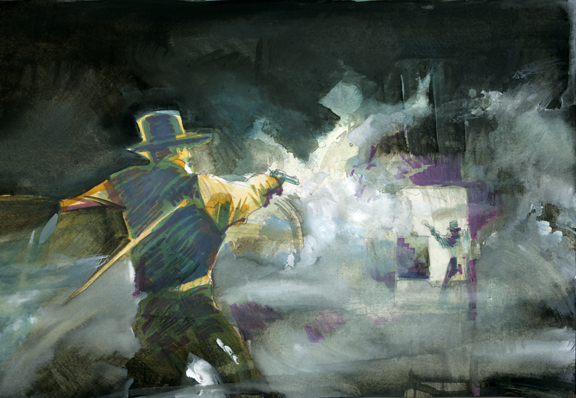 "Shooting at Ghosts In The Tunnel Saloon"


Phy died, but against all odds, Gabriel survived his serious wounds and within a month he was back up and running. But the fight haunted him. The following sums up that claim and then some:

Mike Rice recalled, "the killing of Phy preyed on him as long as he lived. He expressed his regrets to me on many occasions. It worried him in his waking and sleeping hours to the extent that he was often irrational on the subject. Once on the desert, while we were occupying the same blankets, he dreamt of his encounter with Phy and in a somnambulistic condition fired off every shot
in his gun, at the same time exclaiming, 'Joe, Joe, Joe!'"'

He was still shooting at ghosts in the Tunnel Saloon. Pete's friend ends with this comment:

"After this incident I never traveled alone with Pete Gabriel."
—Mike Rice