Things You Should Know I Know

August 18, 2018
Here's a quote I love: "If you are going to tell the truth, better make them laugh, otherwise they will kill you."

This brilliant sentiment—variously ascribed to George Berhnard Shaw, Cecile Starr, Charles Ludlam, Richard Pryor, James L. Brooks and others, I kid you not—perfectly captures what I am about to tell you.

Two weeks ago I talked my good friend, the Top Secret Writer, into giving us a no-holds-barred rant on the state of history in this country. Long story short, he did just that, at some expense,  in terms of time and effort.

I love Paul Andrew Hutton and I love his rants. When he gets going on a topic, it is nothing short of mesmerizing to hear him launch off on something he sees as untrue, unfair and hypocritical. And through it all, he makes me laugh, and then some.

I asked for a thousand words, I got two thousand. I asked for examples and he was quite specific.

I believed my staff and our readers would get the acerbic wit and the insights and enjoy the hell out of it. Well, my staff had a cow when they read it, so the piece has gone through some emotional editing gyrations since last Thursday and the tweaking continues into the weekend. I will keep you posted.

Meanwhile, other sources are weighing in as well on this controversial subject, i.e., our sordid past. 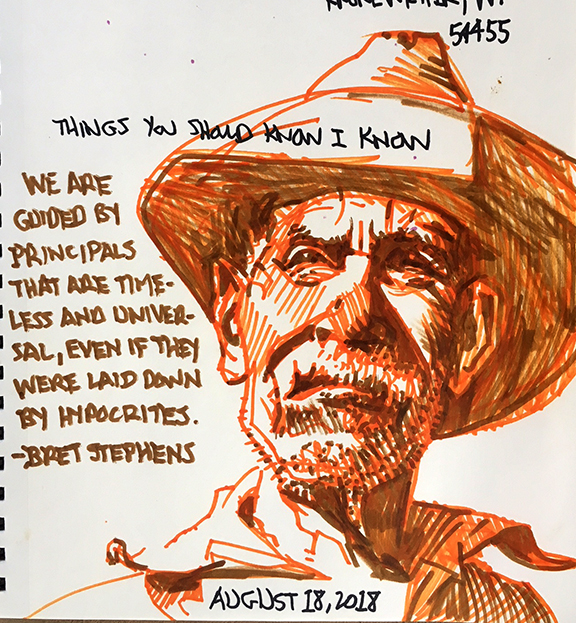 "The U.S. has. . . endured reversals, crises, malaise and committed its share of crimes. There is an extensive literature, dating to the 1780s and continuing through the present, predicting imminent doom or long-term decline. There's an equally long literature cataloging America's many sins, most of them real but very few of them all that particular to us, including slavery, ethnic cleansing, territorial conquest, racism and misogyny.

"But the consistent theme of American history has been one of continual overcoming by way of direct recourse to first principals—principals that are timeless and universal, even if they were laid down by hypocrites."
—Bret Stephens, in The New York Times

"There is nothing wrong with America, that cannot be cured by what is right with America."
—President Bill Clinton