August 30, 2018
I wasn't happy with my previous attempts to portray the Tunnel Saloon shootout, so I got up this morning and did another one. 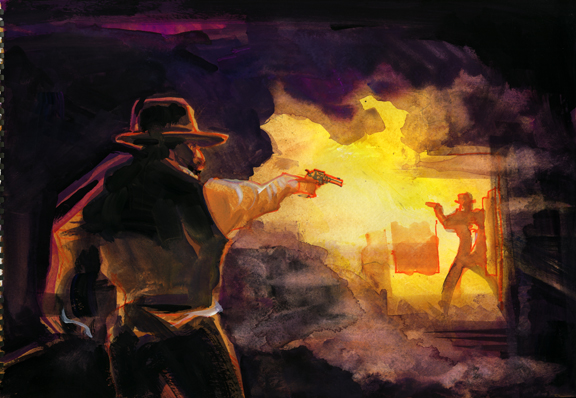 "Shooting Ghosts In The Tunnel Saloon #4"

When Pete Gabriel and Joe Phy faced off in the Tunnel Saloon on May 31, 1888, the first exchange of gunfire snuffed out the lights (some reports say a lone light) and, as Pete moved down the bar to confront his adversary, he kept firing through the smoke and darkness.

Here are several eyewitness accounts that show how hard it is to determine what actually happened, even if you have five, or more, eye witnesses standing in the immediate vicinity.


"The shooting occurred in my saloon in Florence, Arizona. I knew Gabriel, also the deceased. I had been out and came in the back door and had got within about four steps of Gabriel when at the time I saw Joe Phy come in at the front door. The only word that I heard between the parties was Gabriel said "Joe," at the same time Gabriel went for his pistol and shot. I cannot say how many shots he fired before Phy shot. I am certain as to Gabriel firing the first shot."
—J.G. Keating, owner of the Tunnel Saloon

"It seemed to be dark, the only light I saw was the flash of the pistols. I saw Phy enter the saloon; he did not have a pistol in his hand when he entered, that I could see."
—John C. Harris

"Phy did not have his pistol in his hand when he entered the door."
—J.W. Rannels

"I saw Joe Phy go into the saloon of Miller and Keating on the 31st of May, at about 7 or 8 o'clock as near as I can judge. As Mr. Phy was going into the saloon he had a six-shooter in his hand."
—Thomas Sullivan

"I saw a man with his hand on the door, the door opened and apparently backing out. While he was standing in that position I saw the flash of a shot which seemed to go directly against his breast. I remarked when that first shot was fired, 'That man is down.' Mr. Clark remarked, 'Upon my soul, let's get away from here.' We retreated rapidly towards Denier's store. The man in the door came out and started toward Jaun Cabeza's store, follow by Phy. There were, I think four shots fired, after they both came out. I think next to the last shot was fired by Phy as he was falling. As he fell he said, "Oh, my God! I am down." After the last shot the other man walked off toward the hotel. As I saw it was over, I started to the drug store to get the doctor. He was not there and I went to where Phy was. Mr. Laughlin and myself took him up and carried in the corral and helped to undress him."
—Dr. William Harvey

Reading between the lines, it appears that Joe Phy entered the Tunnel Saloon to have it out with Pete Gabriel. Perhaps he thought he could talk first, or give him what for. Pete did not hesitate, but drew his pistol—out of his pants, by the way—and fired. And, it appears his first shot hit Phy in the chest, which would have taken the fight out of anyone. The incredible thing is that Gabriel had been drinking all day on the trip to Florence, and then for an hour, or so, after he arrived. Several testified that he was "in the bag." So, that he could still shoot straight is amazing. And the fact that Gabriel had a chest wound and a gut shot, testifies to the ability of Phy to return fire after having been mortally wounded.

More Telling Detail
"Pete Gabriel was standing near the end of the bar when Joe Phy entered the front door. . .As soon as Phy appeared Gabriel drew his pistol and a moment later they were both firing at one another. . .the first shot put out the front lamp and all I could see as the flashes of the pistols, but I don't know how many shots were fired. [historians now believe there were 11 shots] Phy moved away from the door to the right corner and Gabriel worked along the bar towards the door with the evident intention of getting outside, and he was the first to go out. Phy followed and several shots were fired outside."
—J.G. Keating

To find out more of the back story about this gunfight go to:

The Tunnel Saloon Back Story

"Tests have proven that eyewitnesses aren't as reliable as they claim to be, especially when those witnesses are older than age 60. In one study at the University of Virginia, participants between the ages of 60 and 80 performed far worse than college-aged students, which is not that surprising given aging eyesight. But the study revealed another startling find: The older eyewitnesses were also more adamant and confident in their wrong answers. So jurors not only hear unreliable testimony from an older witness, but they're likely more convinced of that testimony because of the eyewitness's confidence."
—Charles Bryant